2010. A new chapter. A new beginning for Dayang Nurfaizah, as she opens the year with a sensational collaboration with Marcell, Indonesia’s R&B crooner, for their much-awaited duet, aptly entitled SAYANG.

Fresh from winning the 17th Anugerah Industri Muzik’s Best Pop Album, Dayang returns to the limelight with a concert at the Esplanade, Sinagpore with a joint concert with her Indonesian idol, Marcell. 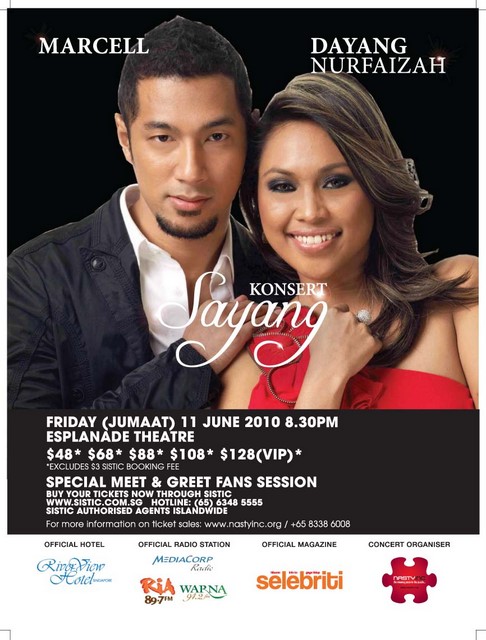 This synergistic alliance came about from numerous requests by fans near and far eager to see the pair team up yet again, since their sizzling stage performance in Kuala Lumpur recently.

Both artists, known for their enticing and very distinctive vocal skills, promises an evening filled with mesmerising renditions of their own songs as well as some exceptional duets. Being good friends outside the arena of ‘work’, Dayang and Marcell, both have high regard for each other’s talent and work ethics and the chemistry that exists between them will surely set the atmosphere for the night.

Dayang says, “I am Marcell’s biggest fan. I’ve been invited to guest star at his show and we have even performed a full showcase together recently. But to have the chance to perform a full concert with him and at the prestigious Esplanade no less is a definitely a dream come true.

He has an amazing voice and a one-of-a-kind stage presence. Recording SAYANG with an entertainer of his calibre is definitely the highlight of my 10-year career in the music industry and performing with him adds the icing on the cake. I am probably more excited than my fans about this concert at the Esplanade.

Marcell adds, “Dayang is, without a doubt, one of the most talented singers in the country and Malaysians should be proud to call her theirs. I fell in love with her voice when I first heard it and told myself that one day, I would definitely have to record a song with this girl.

Dayang has a unique voice and sings from her heart.”

11 June 2010 will be a rare and exclusive opportunity to witness two great artistes on one stage.

In additional to their own string of hits and their original duet song’ Sayang’, Dayang and Marcell will also be performing some specially selected duets which will surely make the concert an evening to remember.