Calling all World of Warcraft fans! Golden Screen Cinemas Sdn Bhd (GSC) is giving away a free digital copy of World of Warcraft (WOW) in conjunction with the new movie Warcraft: The Beginning. This collaboration is a sweet treat exclusively for GSC customers only, where every movie ticket purchased of this new movie entitles them to one game code from now until 23rd June 2016. Each game code is worth USD 19.99 and you can claim additional four movie-inspired transmog skins when you log into the game. 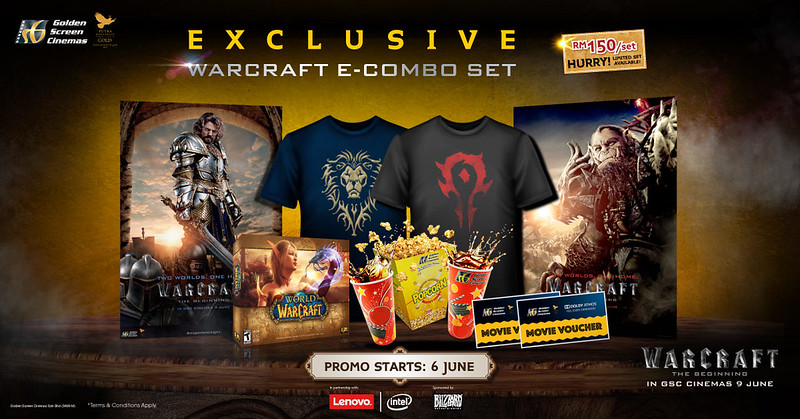 USD 2.2 MIL WORTH OF EXCLUSIVE GIVEAWAY

GSC Giving Away World of Warcraft with Every Movie Ticket Purchase 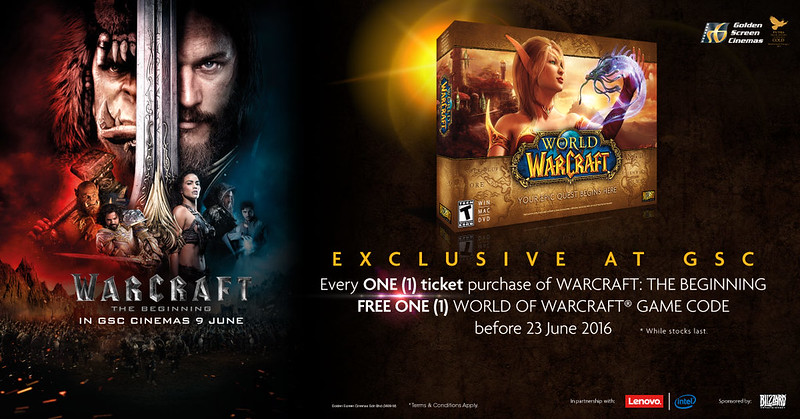 At only RM 150 per set, the Warcraft e-Combo is worth more than RM 300 and consists of:

The much-anticipated Warcraft: The Beginning hits the silver screen today. Directed by Duncan Jones, this epic fantasy brings to life the world-colliding conflict between Orcs and Humans.

[pullquote align=”right”]Get your adrenaline pumping by immersing yourself in this spectacular saga of power and strength on GSC Maxx – Malaysia’s largest digital screen.[/pullquote]

Feel the enemy pressing in as you hear the battle cries from all around you with Dolby Atmos® audio surround technology and experience the battles for real with D-Box motion seats, perfectly synchronized with the actions on screen.

Aspiring to be a regional cinema and content operator that is recognized for providing quality total movie entertainment, GSC offers THX-certified halls and the multidimensional Dolby Atmos® audio surround technology across Malaysia. The 17-screen GSC Mid Valley Megamall holds the record of the largest multiplex in Southeast Asia while the 555-seater GSC Maxx in Berjaya Times Square is the largest digital hall in Malaysia. GSC is the only cinema in Malaysia equipped with D-Box motion seats.