The National Film Development Corporation Malaysia (FINAS), an agency under the Ministry of Information, Communications & Culture Malaysia, has selected the award winning film Bunohan to represent Malaysia in the next instalment of the Oscar race. A record breaking 71 countries have submitted films for consideration in the Foreign Language Film category this year. Malaysia has only ever submitted one film prior to this – Puteri Gunung Ledang in 2004. 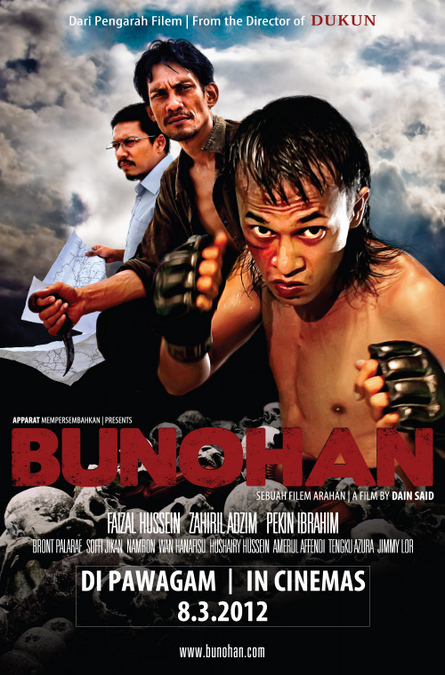 “Although we have not been submitting films to the Oscars for sometime, this year we are particularly proud to have a film worthy of the selection based on the critical acclaim that it has garnered both locally and internationally as well as having a solid record of screenings at Oscar-qualifying festivals,” explained Naguib Razak, the Director General of FINAS.

Bunohan had its world premiere at the Toronto International Film Festival in September 2011, followed by regional premieres at other reputable film festivals such as Rotterdam and Taipei. In the United States, Bunohan was screened at several Oscar-qualifying festivals, including in Los Angeles, Palm Springs and Seattle. It was released theatrically in Malaysia in March 2012 to rave critical reviews and more than held its own against mainstream genre films.

Since its world premiere in Toronto, the film has secured major sales & distribution deals internationally, with international sales being handled by Easternlight Films, and Traction Media handling sales in the US.

Bunohan is distributed in UK, French, German, Benelux & Australian territories by Universal Pictures, while its US distributor, Oscilloscope Pictures is planning a 2013 release.

“This submission is not just a matter of declaring Malaysia’s best candidate, but rather an acknowledgement of this Malaysian film’s significant international accomplishment and international release potential,” added Naguib.

The film’s writer-director Dain Iskandar Said was very humbled when notified, and is relieved that Bunohan satisfied the Academy’s submission requirements. The producer, Nandita Solomon is grateful for the national recognition bestowed on Bunohan, Dain’s first feature to meet audiences. She added that this happy news comes together with the nomination for Achievement in Cinematography for Bunohan’s director of photography, Jarin Pengpanich at the Asia Pacific Screen Awards in Australia. Both Nandita and Dain are currently pitching Apparat’s next feature film project Interchange in the Asian Project Market at the Busan International Film Festival in Korea.

Bunohan’s entry for the Oscar is timely in light of the rapid and strong growth of the Malaysian film industry in recent years. The emergence of Malaysian feature filmmakers like Dain who are generating films strong enough to compete in the international market continues the success of Malaysian animation and documentaries that have been penetrating the international markets in recent years.

Naguib adds, “Bunohan’s success is important in conveying the right message to young filmmakers to break new ground, to constantly challenge themselves with content that connect and has resonance with its audience.”

Bunohan, written and directed by Dain Iskandar Said, tells the tragic story of three estranged brothers – a kickboxer, a businessman and an assassin who return to their hometown, Bunohan, where their fates intertwine with dark consequences. It stars Faizal Hussein, Zahiril Adzim and Pekin Ibrahim, supported by Bront Palarae, Sofi Jikan, Nam Ron, Wan Hanafi Su, Amerul Affendi and Tengku Azura among others. It is produced by Nandita Solomon of Apparat and co-produced by Tim Kwok of LA-based Convergence Entertainment who will be spearheading the promotional campaign in the lead up to the nominations.

Now that the final list of submissions has been officially announced, the Academy will begin its process of viewing and voting. From these 71 submissions, 9 will be shortlisted, before the final five nominees will be announced by the Academy on 10 January 2013. The 85th Academy Awards will be held on 24 February 2013.

BEVERLY HILLS, CA – A record 71 countries, including first-time entrant Kenya, have submitted films for consideration in the Foreign Language Film category for the 85th Academy Awards®.

The 85th Academy Awards nominations will be announced live on Thursday, January 10, 2013, at 5:30 a.m. PT in the Academy’s Samuel Goldwyn Theater.

Academy Awards for outstanding film achievements of 2012 will be presented on Sunday, February 24, 2013, at The Dolby Theatre™ at Hollywood & Highland Center®, and televised live on the ABC Television Network. The Oscar presentation also will be televised live in more than 225 countries worldwide.

This is a list of submissions to the 85th Academy Awards for Best Foreign Language Film. The Academy of Motion Picture Arts and Sciences (AMPAS) has invited the film industries of various countries to submit their best film for the Academy Award for Best Foreign Language Film every year since the award was created in 1956. The award is presented annually by the Academy to a feature-length motion picture produced outside the United States that contains primarily non-English dialogue. The Foreign Language Film Award Committee oversees the process and reviews all the submitted films. Nine shortlisted contenders will be revealed a week before the announcement of the Oscar nominations.

The submitted motion pictures must be first released theatrically in their respective countries between October 1, 2011 and September 30, 2012.

On 8 October 2012, the Academy announced the final list of eligible submissions, with a record number of 71 films. Nine finalists from among the dozens of entries will be shortlisted in January, with the final five nominees to be announced on January 10, 2013.