GRAMMY nominated and multi-platinum selling artist Ariana Grande and 10-time GRAMMY, Oscar®-winning and multi-platinum selling singer/songwriter/ musician John Legend are set to perform the Oscar and GRAMMY-winning duet “Beauty and the Beast” as the title track for Disney’s upcoming soundtrack to the live-action film adaptation “Beauty and the Beast.” The song will also be featured in the film. 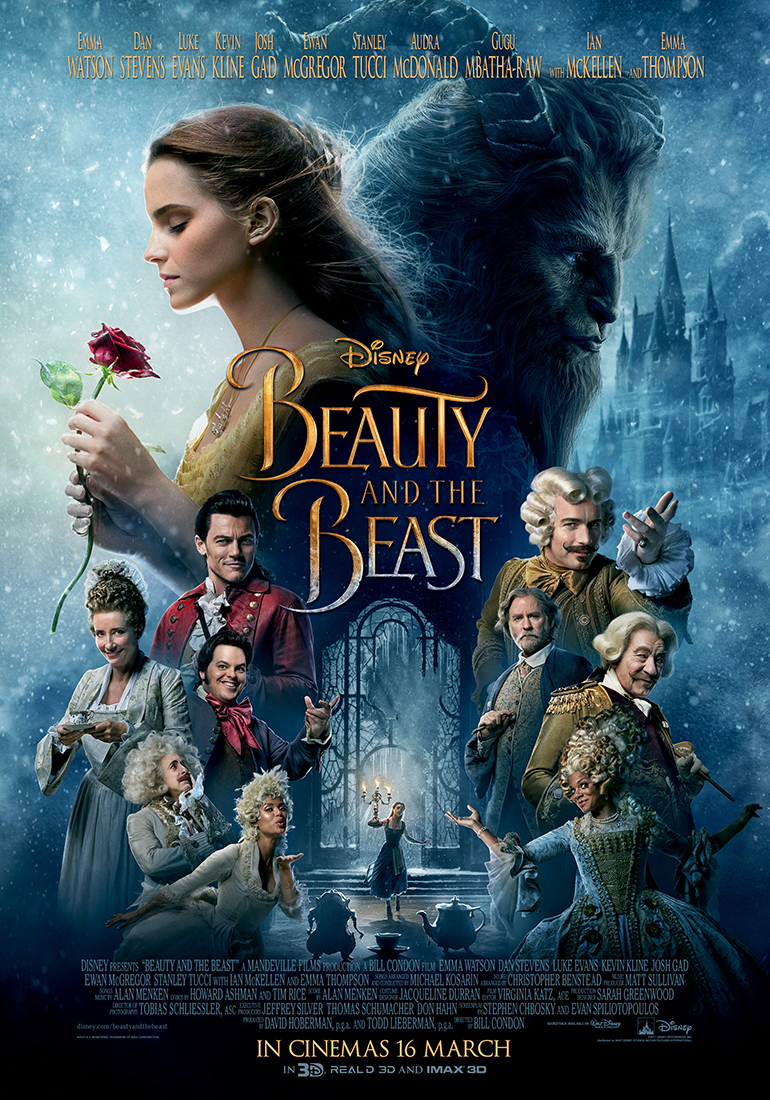 The new rendition of the classic song is produced by GRAMMY-winning veteran Ron Fair, whose music career spans 37 years as a major-label record company leader and accomplished producer, arranger, recording engineer and musical director. Fair was brought in to produce by Disney’s president of Music & Soundtracks, Mitchell Leib, who also brought Grande and Legend to the project. The history of collaboration between Leib and Fair in film music goes back to the highly-successful “Pretty Woman” soundtrack. “Ron was the first and only choice to make this particular record,” says Leib. “No one is a better vocal producer and he also has a great understanding of the filmmaking dynamic.”

Fair’s recordings have won six GRAMMY Awards and have been nominated 18 times. Fair discovered and shepherded Christina Aguilera, selling over 50 million albums and winning numerous GRAMMY Awards. He A&R’d Aguilera’s first five albums and championed the Black Eyed Peas to 27 million albums, 4 number-ones and multiple GRAMMY wins, as well as co-producing and arranging the strings on their global breakthrough # 1 hit “Where is The Love?”

Says Fair, “Stepping into the shoes of an Oscar and GRAMMY Award-winning classic is not small potatoes. But with today’s two greatest plutonium singers – John Legend and Ariana Grande – we are bringing the song back with a new school-old school fresh treatment that shows the soulfulness and power of what a great melody and lyric can inspire.”
2

The music video will be directed by Dave Meyers, the innovative visionary whose long-time collaborations with major artists like P!nk, Janet Jackson, Ice Cube and Britney Spears have resulted in dozens of award nominations and many wins, including a GRAMMY in 2005 for Best Music Video and 11 MTV Video Music Awards, including one for Katy Perry’s smash hit “Firework.” He recently directed the music video for P!nk’s hit single “Just Like Fire” from the Walt Disney Records soundtrack for “Alice Through The Looking Glass.”

Menken also provides the film score, with new recordings of the original songs written by Menken and Ashman. Also featured are three new songs written by Menken and veteran lyricist and three time Oscar winner Tim Rice. The original motion picture soundtrack will be released by Walt Disney Records on March 10, 2017. The pre-order is available now at http://disneymusic.co/BeautySndtrkP.

About Ariana Grande:
Within less than a year, Ariana Grande captured #1 on the Billboard 200 twice: first with her Republic Records debut “YOURS TRULY” and also with its 2014 follow-up “MY EVERYTHING.” “YOURS TRULY” yielded the game-changing pop smash “The Way” featuring Mac Miller, which went triple-platinum, landed in the Top 10 of the Billboard Hot 100 and seized #1 on the iTunes
Overall Top Songs chart. Meanwhile, the platinum-selling “MY EVERYTHING”garnered a GRAMMY Award nomination for “Best Pop Vocal Album” and spawned the six times-platinum hit “Problem.” Upon the single’s release, Ariana became the youngest woman to debut with over 400K sold first-week, while the song ranked as the 4th highest digital song debut for a female artist and 8th highest ever. Moreover, it debuted at #1 in 85 countries, topping the iTunes Overall Top Songs and Pop Songs charts for four weeks. During release week, “MY EVERYTHING”was #1 on Spotify as Ariana personally rose to #1 on Billboard’s Artist 100 chart. She also became the first woman in history and the first artist since Michael Jackson to simultaneously have three songs (“Problem,” “Break Free” featuring Zedd and “Bang Bang” with Nicki Minaj and Jessie J) in the Top 6 of the Digital Songs Chart. “Bang Bang” went platinum and was GRAMMY-nominated for “Best Pop Duo/Group Performance.” By the end of the year, she landed four songs in the Top 10 of the Billboard Hot 100, the most of any artist in 2014. Ariana has enjoyed a total of eight Hot 100 Top 10 smashes.

In 2013, she was named “Best New Artist” at the American Music Awards. Other accolades followed with Ariana winning: “Favorite Breakout Artist” at the People’s Choice Awards2014; the “Young Influencer Award” at the iHeart Radio Music Awards; the “Radio Disney Chart Topper Award,” “Choice Female Artist” and “Choice Single” for “Problem” at the 2014 Teen ChoiceAwards; and more. At the 2014 MTV VMA’s, “Problem” was named “Best Pop Video” as well. In November, Ariana took home the award for “Favorite Female Artist – Pop/Rock” at the 2015 American Music Awards.

Songs Chart minutes after release. “Dangerous Woman” also debuted in the Top 10 of the Billboard Hot 100 earning her the distinction of becoming the first artist to debut on the chart with the lead single from her first three albums. Her current single, “Side to Side,” featuring Nicki Minaj, recently became Grande’s eighth top 10 hit on the Hot 100.

About John Legend:
Critically acclaimed, multi-award winning, platinum-selling singer-songwriter John Legend has garnered ten GRAMMY Awards, an Academy Award, and a Golden Globe, among others. Legend recently released his fifth studio album “DARKNESS AND LIGHT,” to rave reviews, which features his current anthemic hit “Love Me Now.” Legend also serves as one of the principles for Get Lifted Film Co., a film and television production company based in Los Angeles. Get Lifted Film Co. serves as executive producers on the HBO documentary “Southern Rites,” Pop Network docu-series “Sing it On”, WGN America’s series “Underground,” and films such as “Southside With You” and “La La Land.” In 2015, Legend initiated the #FREEAMERICA campaign; a campaign designed to change the national conversation of our country’s misguided policies and to make a change in America’s criminal justice system.

About the film:
The story and characters audiences know and love come to spectacular life in the live-action adaptation of Disney’s animated classic “Beauty and the Beast,” a stunning, cinematic event celebrating one of the most beloved tales ever told. “Beauty and the Beast” is the fantastic journey of Belle, a bright, beautiful and independent young woman who is taken prisoner by a Beast in his castle. Despite her fears, she befriends the castle’s enchanted staff and learns to look beyond the Beast’s hideous exterior and realize the kind heart of the true Prince within. The film stars: Emma Watson as Belle; Dan Stevens as the Beast; Luke Evans as Gaston, the handsome, but shallow villager who woos Belle; Kevin Kline as Maurice, Belle’s father; Josh Gad as LeFou, Gaston’s long-suffering aide-de-camp; Ewan McGregor as Lumière, the candelabra; Stanley Tucci as Maestro Cadenza, the harpsichord; Audra McDonald as Madame de Garderobe, the wardrobe; Gugu Mbatha-Raw as Plumette, the feather duster; Hattie Morahan as the enchantress; and Nathan Mack as Chip, the teacup; with Ian McKellen as Cogsworth, the mantel clock; and Emma Thompson as the teapot, Mrs. Potts.

Directed by Bill Condon based on the 1991 animated film “Beauty and the Beast,” the screenplay is written by Stephen Chbosky and Evan Spiliotopoulos and produced by Mandeville Films’ David Hoberman, p.g.a. and Todd Lieberman, p.g.a. with Jeffrey Silver, Thomas Schumacher and Don Hahn serving as executive producers. “Beauty and the Beast” will be released in Malaysian cinemas on 16 March, 2017.