From special feature programmes and reality shows to TV dramas and movies, Astro customers can access popular titles and all-time favourites on all Astro platforms including on demand, Astro GO, NJOI and NJOI Now. 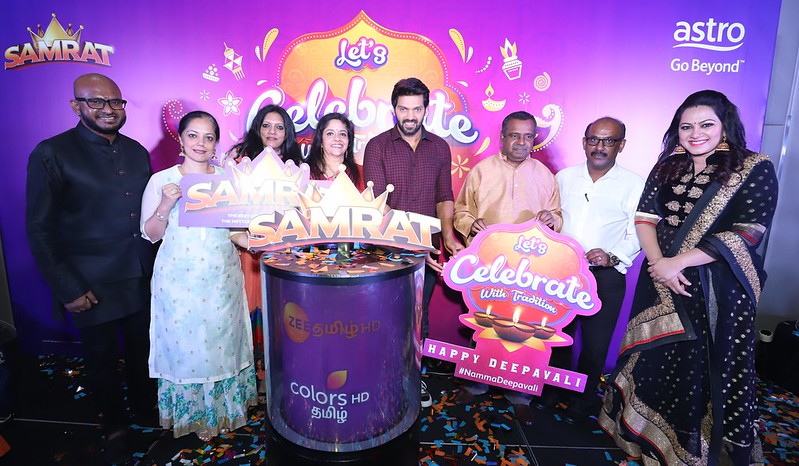 Adding on to the variety of titles available are two new channels, Colors Tamil HD (CH 233) which offers customers more dramas and reality shows including Enga Veetu Mapillai and Colors Super Kids; and, Zee Tamil HD (CH 232), which is home to the latest movies, dramas and reality shows such as Sa Re Ga Ma Pa Lil Champs Season 2 and Genes Season 3.

Both Colors Tamil HD (CH 233) and Zee Tamil HD (CH 232) will be available on the Samrat Pack. Customers who subscribe to Samrat Pack by 20 October 2018 via CH200 will receive tickets to watch well-known Tamil movie star, singer and music composer, GV Prakash, at his Malaysian concert debut on 28 October 2018 at Stadium Melawati, Shah Alam.

Astro customers can subscribe to Samrat Pack from as low as RM3/month, depending on their subscription. For more details on Samrat Pack, visit www.astroulagam.com.my/samrat.

“We are pleased to usher this year’s Deepavali celebrations by offering the best in content to our customers. We continue to reach out to our customers through all platforms – TV, radio and digital – to make their experience more immersive and engaging and we hope that with the new content available on the Samrat Pack, our customers will have the opportunity to access even more titles and movies for a greater range of Tamil and Hindi entertainment.”

From the rich offering of content this Deepavali, highlights according to their respective channels are as below (Note: Please refer to the appendix for a more comprehensive list of titles and TX details):

RAAGA, Malaysia’s No. 1 Tamil radio station, will be producing a 5-episode radio drama for the first time. Each episode will premiere between 10am – 1pm, Monday to Friday from 29 October 2018 during RAAGA’s Hello Nanba segment. Repeats of the all the episodes will be available on Hypermalai (3pm – 7pm) and Vealai Mudinjaachu (7pm – 12am) segments.

RAAGA will also be producing a new Deepavali song and music video, which features RAAGA announcers – Aanantha, Uthaya, Suresh, Ram, Revathy, and Ahila – amongst others. Listeners can tune in to RAAGA on-air or alternatively watch the music video on RAAGA’s official website www.raaga.my and Facebook page: Raaga (Malaysia)

For more information on Deepavali programme highlights above, log on to www.astroulagam.com.my

A family-based drama connecting everyone for betterment.

A youngster from the slums battles against food adulteration by the company that employs him. Starring by Sivakarthikeyan, Fahadh Faasil and Nayanthara.

U-TURN – 6 November 2018 @ 9pm
An intern journalist traces the history of people who unlawfully took a u-turn on a city flyover and died in mysterious circumstances. The stars Samantha Akkineni in the lead role alongside Aadhi Pinisetty, Rahul Ravindran and Bhumika Chawla.

Irumbu Thirai – 6 November 2018 @11am
Kathiravan, a major in the Indian army with anger management issues, is compelled by circumstances to borrow a loan from a bank with false documents. When the entire money in the account vanishes, Kathiravan tries to track down the scamsters, and it leads him to White Devil, a master hacker. Starring, Vishal, Arjun, Samantha and Robo Shankar.

One Heart: AR. Rahman Concert – 6 November October 2018 @6.30pm
One heart is a musical journey and documentary picture describing the true eternal feelings of the band people in AR.Rahman concerts, the efforts made in organizing it, and most importantly the endless joy of his career path.

Kaala – 6 November 2018 @9.30pm
A gangster from Tirunelveli, who is the King of Dharavi, fights to keep the land safe from mighty politicians and the land mafia. Starring, Rajinikanth, Nana Patekar, Easwari Rao, Samuthirakani.
Astro Thangathirai (CH 241)

Merku Thodarchi Maalai – 9 November 2018
Rengasamy is a daily wage labourer who makes a living by carrying cardamom sacks, from the mountain to foothill. His goal is to buy a land for doing agriculture. Chacko, a communist from Kerala, unionizes these workers and prevents the estate owner from exploiting the workers, therefore there are frequent clashes between the landlord and union members. Starring by Antony, Gayatri Krishnan, Abu Valayamkulam.
TARA HD (CH 108)

Kuch Kuch Hota Hai – 6 November 2018 @ 9pm
During their college years, Anjali was in love with her best-friend Rahul, but he had eyes only for Tina. Years later, Rahul and the now-deceased Tina’s eight-year-old daughter attempts to reunite her father and Anjali. Directed by Karan and starred the popular on-screen pair of Shah Rukh Khan and Kajol in their fourth film together.

Kabhi Alvida Naa Kehna – 7 November 2018 @ 9pm
Dev, a famous footballer, becomes injured and gets dependent on Riya. Brooding on his ill-fate, he gets suspicous of an affair going on between Riya and another man. Is the affair a reality, and if it is, will Dev openly accuse Riya? Amitabh Bachchan, Shah Rukh Khan, Abhishek Bachchan, Rani Mukerji, Preity Zinta and Kirron Kher in lead roles.
BollyOne HD (CH 251)

Veere Di Wedding – 8 November 2018 @ 9pm
Kalindi, Avni, Meera and Sakshi are four childhood best friends who grew up in Delhi. They reunite after ten years, not realising how much things have changed over the years. Follow the four friends as they navigate the trials and tribulations they face in the modern-day world, including family acceptance, marriage and societal perceptions. A comedy film starring Kareena Kapoor, Sonam Kapoor, Swara Bhaskar and Shikha Talsania.