AN AMAZING ADVENTURE WITH AIRASIA X

Altitude X will take Khoo on an X-citing journey on his quest of scaling eight of the highest peaks within the AirAsia X’s network namely China, London, Paris, Iran, Japan, Korea, Taiwan and New Zealand. 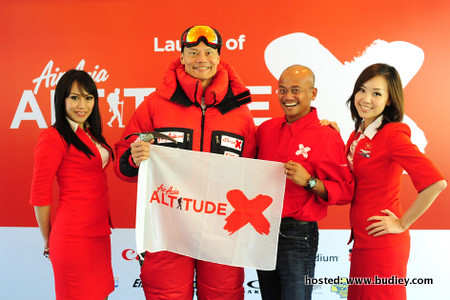 Azran Osman-Rani, CEO of AirAsia X said, “Altitude X is the perfect project that embodies our pioneering adventurous spirit at AirAsia X. From my recent trip to Antarctica, and now this Everest expedition, we show that we will go to the ends of the earth and to the top of the world, to promote exciting travel journeys, low fares and fair competition. No mountain is too high to be conquered. No obstacle is too insurmountable. We believe the unbelievable, dream the impossible, and never take no for an answer”.

Sports sponsorship has always been essential to AirAsia X as it brings communities together, allows people to recognize their dreams, and above all establishes AirAsia X as a globally recognized brand and organization.

Khoo’s adventurous climb will start off at Mt Everest in China which he has conquered twice through Nepal. This time around, he will climb the North Ridge from Tibet, accessible via AirAsia X’s flight to Chengdu. If he succeeds, he will be the 1st South East Asian to have reached the summit of Everest 3 times.

When asked the reason for climbing Mt Everest for the 3rd time, Khoo says, “I am very grateful to be given the opportunity to travel and to climb numerous peaks around the world. If possible, I would love to climb Mt Everest again when I am 50, 60 or even 70 if health permits. When you live life with passion, you do not know the meaning of retirement.”

Khoo added: “I am thankful to AirAsia X and the other sponsors for supporting me in living my dream and making this adventure possible. I hope this will serve as an inspiration to everyone who has a dream, may it be in sports, or any dream at all. My hope is to be an exemplary model for those who want to live their dreams as I did with mine.”

Azran further adds that, “We would like to dedicate Altitude X to the indomitable spirit of Japan”.

“AirAsia X will be launching a solidarity campaign to support Japan’s recovery and invite those interested in an opportunity to hike up Mount Fuji in August with Khoo Swee Chiow so follow us on facebook.com/AirAsia and twitter.com/AirAsia for upcoming details,” he concluded.

For further updates and photos Of Altitude X, kindly log on to www.altitude-x.com. 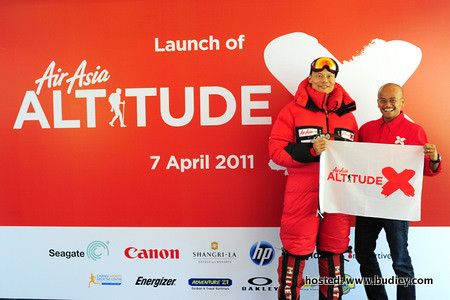