AirAsia’s First Big Sale for 2012!
One million seats on sale to all AirAsia & AirAsia X destinations with all-in-fares from as low as RM19*

Staying true to its tagline, ‘Now Everyone Can Fly’, AirAsia, the world’s best low cost airline is having its first awesome Big Sale this year across both AirAsia and AirAsia X’s route network with all-in fares from as low as RM19 one way.

The Big Sale will be from 15 – 19 February 2012, and guests will be able to travel from 11 September 2012 to 31 January 2013 with these ultra low fares which are available online at www.airasia.com and all of AirAsia’s mobile booking platforms. All-in-fares are from RM19 one way to domestic destinations such as Alor Setar, Penang, Langkawi, Kota Bahru while flights to East Malaysia cities such as Kuching, Bintulu, Sibu and Miri only costs from RM29 one way. Guests can also travel to popular destinations such as Bali, Phuket, Singapore and Ho Chi Minh City from only RM49, and other picturesque destinations such as Hanoi, Da Nang and Siem Reap from RM89. And from as low as RM139 one way, guests can also travel to Guangzhou, Hong Kong, Macau, Guilin, Shenzhen, Colombo and more. 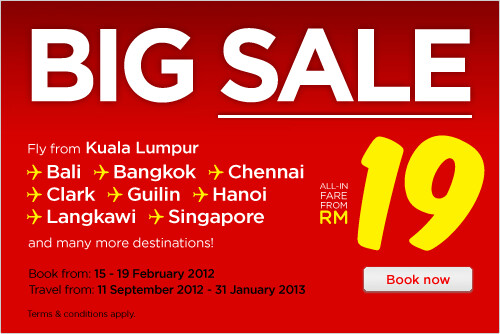 In addition, guests may have the luxury of flying long-haul with extra comfort on AirAsia X’s Premium flatbeds one way from as low as RM 949 to China (Chengdu, Huangzhou, Tianjin) and from RM 999 to Australia (Sydney, Perth, Gold Coast, Melbourne), Taiwan (Taipei), Korea (Seoul) and many more X-citing destinations.

Kathleen Tan, AirAsia’s Regional Head of Commercial said, “AirAsia has been having our Big Sale for nearly six years now, with approximately one million promo seats each time. This would mean millions have enjoyed traveling with us to our extensive route network throughout the years at unbeatable low fares, which has now reached 152 routes, 23 countries and 13 hubs across Malaysia, Thailand, Indonesia, Philippines, Singapore and Hong Kong (both are virtual hubs). This Big Sale offers all-in-fares from RM19 one way, and guests should not miss out on this great opportunity to plan their year-end and 2013 new year holidays, especially to some of the new destinations that we have added such as Semarang, Surat Thani and Chongqing.”

Guests are strongly encouraged to book their value-added services such as Baggage Supersize, Hot Seats, Pick-A-Seat, AirAsia Insure and in-flight meals online together with their flights as they are able to save up to 30%.

“At AirAsia, we understand that the Big Sale is an anticipated event by all our guests, and this time around, we have one million seats on sale to all the destinations that we fly to as a group across all four airlines (Thai AirAsia, AirAsia Indonesia, Malaysia AirAsia and AirAsia X). Seats will be snapped up like hot cakes, as there is something for everyone. It doesn’t matter if you are a golfer, history buff, foodie, diver, beach bum, shopaholic or just planning a business trip, there is an AirAsia destination for you,” added Kathleen Tan.

Azran Osman-Rani, CEO of AirAsia X said, “With the Big Sale offer, guests from AirAsia X destinations will be spoilt for choice. This is definitely an opportune time for our guests to plan their multi-destination travel via our strong feeder network in South East Asia and beyond. Guests from Australasia, China, Taiwan, Japan and Korea where AirAsia X flies to may connect from its Kuala Lumpur hub to various exotic destinations such as Bali, Phuket, Bangkok, Siem Reap, Ho Chi Minh and many more at X-traordinary low fares. Guests may also take advantage of our fly-thru services for a seamless travel experience.”

To compliment your flight bookings, AirAsiaGo will also be offering hotel packages from as low as RM89 for a 3D/2N stay with return flights and all taxes included to hot destinations such as Penang, Kota Kinabalu, Guangzhou, Guilin, Hangzhou, Medan, Bandung, Bali, Jakarta, Bangkok, Phuket and many more at www.AirAsiaGo.com. AirAsiaGo, in a partnership with Expedia, has over 145,000 hotel partners worldwide, and provides guests with a wide variety of options for tours and activities as well.

For guests who are looking for immediate travel in the next few months, AirAsia is also running a ‘2 To Go’ promotion to destinations such as Hangzhou, Chengdu, Tianjin, Singapore, Colombo, Bangkok, Chiang Mai, Yogyakarta, Penang and many more with all-in-fares for two persons from as low as RM78 one way. AirAsia X is also offering special promo fares for immediate travel from RM199 one way to destinations in Australia, Japan, Korea, Taiwan and many more. Both of the promotions’ booking period are from 15 – 26 February 2012, and guests are able to travel immediately from 22 February – 30 April 2012 which are available on www.airasia.com.

Effective 8 February 2012, guests who use the BIG prepaid Visa card as a payment method will be exempted from processing fees for online bookings with AirAsia. This feature is currently only available for members with valid Malaysian mailing address. Earn BIG Points every time you spend with AirAsia and other BIG partners worldwide to redeem free flights with the world’s best low cost airline. Guests can sign up for BIG at www.tune2big.com.

Get tips and tricks on how to grab your Big Sale seats at AirAsia’s social media channels by following them on Twitter (twitter.com/AirAsia) and Facebook (facebook.com/AirAsia) apart from getting the latest promotion updates and other AirAsia activities.

*All fares quoted are all-in fares, inclusive of airport tax and fees for one way only