18 June 2011 – DAY 5 It so windy and cold as we step out the door of Novotel Hotel. We then make a walk around 2 blogs of shopslot to take our breakfast at Joe’s Garage. We picked M1 from the menu thats vegetarian burger with fried egg. As our drinks, we choose mochacino. We spent about half an hour finishing our breakfast. We then walk again back to the hotel. Its getting colder down here. 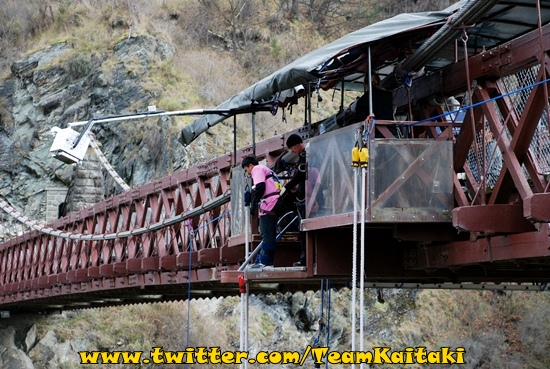 Our next move to the Kawarau Bridge Bungy. This time we are going to do bungy jumping at the AJ Hacket Bungy. AJ Hacket Bungy are the Bungy Originals with the height of 43m. The history of Kawarau Bridge is home of Bungy pioneers AJ Hackett and Henry Asch first commercial Bungy. It was here in 1988 there and then the Bungy phenomenon begun.
Actually, we was not informed about the race at AJ Hacket Bungy. By the time we reached Kawarai Bridge Bungy, we knew that we have to bungy jumping. As for the event for today, each team is to complete 5 trampoline flips, 4 times Horizontal Bungy and Tandem Bungy. KAITARI teams was guided by Miss Kate.

She really helpful and given us the courage not to fear. For a start, Mohamad Uzair going to do the 5 flips trampoline. Once he finishes the 5 flips, has has to run and touch the other team to continue next task. Puan Zaharah and Mohd Zaid did the Tandem Bungy and Budiey did the Horizontal Bungy. Towards the end, KAITARI team manage to finish and grab the T-Shirt. Once all of us put on the T-Shirt, our team was announcee as the winner. Hurray…

It was trill, fear, stunning but joy and full of excitement. We experianced the dive, flip and spin freestyle action at Kawarau Bridge Bungy. The bungy jumping swings us hanging high above the River Kawarau like spring and its up and down. Our mind blowing as we shouted of joy. That was our bravest experience that we all never forget. It so remarkable! This going to be the best activities ever done. There was an offered for those who don’t have the chance to do bungy jumping. They were given the change to do it. So most of us took the challange and did it without fear.

We received a complimentery each an AJ Hacket Bungy’s t-shit, a certificate of prove each, videos and photos of our bungy jumping activities by Kuwarau Bridge Bungy.

After having rest, Mdm Fiona drove us back to the hotel. From NOVOTEL we will move on to our next destination. We want to thank you to Mdm Fiona and Mr Guy from purenewzealand.co.nz and Ms Melanie from Tourism of New Zealand for the inconveniance caused by us. We are so excited taking photographs and might been late. We knew you are chasing time to catch up to another destination. We are sorry about that. 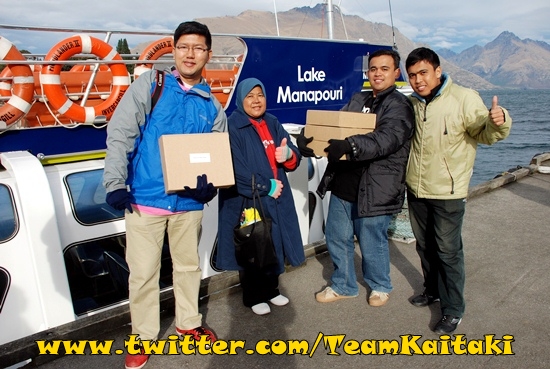 We reached Queenstown at 3.00. It takes half hour to get back from Kawarau Bridge to Novotel Hotel. This time we are heading to Walter Peak High country Farm. It just a walk distance to the Waterfront. Before that, Mdm Fiona given us our luch in boxes. We gathered and walk our way to the Waterfront and brought our packed food as well. We were being welcome by Miss Jennis and gets into the boat. 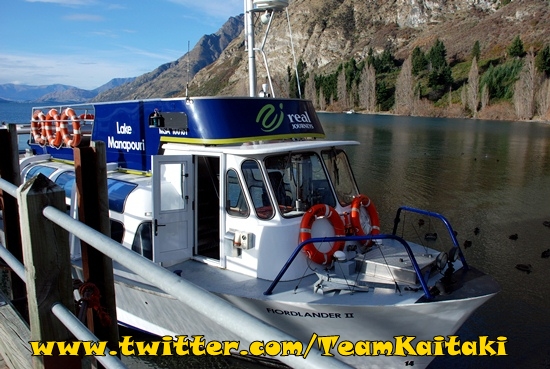 Mr Tom has arranged our next challenge for the day, Our first challenge was sheep herding challenge. Mr Tom guided us on how to us a whistle. He showed the 2 types of dog command which are used in country farms. The border collie was trained to move sheep by eye contact without barking. The Huntaway herds sheep by barking at them. Sheep are mastered down feom the hills. 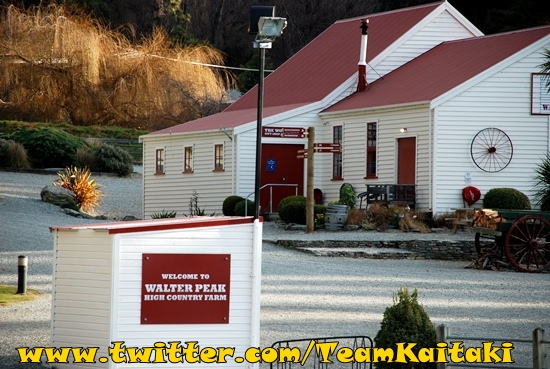 Now its time for us herding the sheeps. Its quite difficult for us to do it. The whistle which was given couldn’t whistled. We need to let 4 sheeps into the respective herd. Team KAITAKI need to let in 4 green sheeps. Team KAIRIRI too, needs to let in 4 orange sheeps into the herd. It was joyful even its rough. We have to catch and grab the sheep and push it in herd.
We manage to let in 3 green sheeps, but unluckily one female orange’s sheep jumped into our herd by itself.

Team KAIRIRI has capture 1 of the green sheep. Well its all depend on the judges, we have to accept the results that goes to KAIRIRI. Congrats Team KIARIRI. That was not the last event, we need to go for another last event. That was to make Pikelet. Our challenge to make 4 Pikelet. We were given apron and bandana. A briefing was given, before we start cooking. We manage to make and dressed 4 Pikelet.

Two judges announced that team KIRARI won the chellange. Well…. congrats again my friend. Your team deserved to win. Our team still consider that we win because we manage to complete all the challenges. Besides, we have the chances to visit the well-planned tours. Thanks to Mdm Fiona, Mr Guys, Ms Melanie and Ms Siew Ping from purenewzealand.co.nz, Tourism of New Zealand and AirAsia respectively. 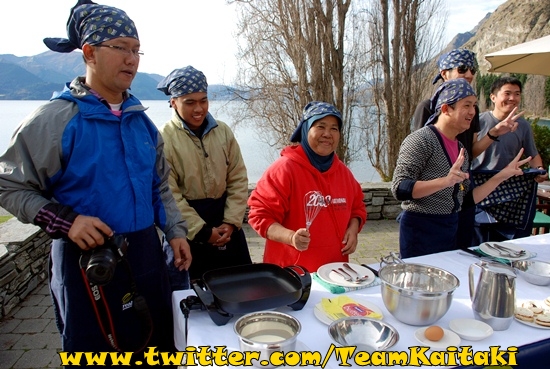 After all the pikeleting, we went for a look of bulls. Four bulls was chased by a dog and brought it to us. Everyone took pictures. Can’t believe, with our own eyes seeing the 4 fat and healthy bulls. We then have to say goodbye to Mr Tom. He let the way to the deck and say goodbye to us. At 3.30pm we sailed back to The Waterfront. 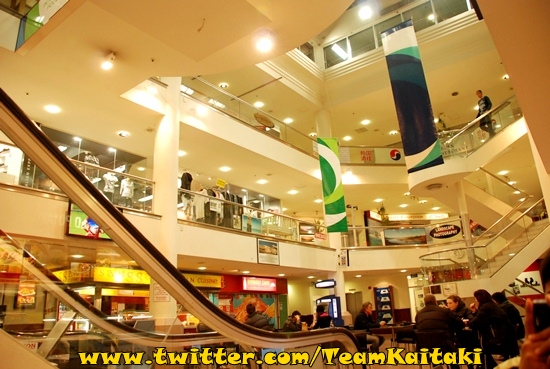 Thats the end of our challenge. After departure, Mdm Fiona inform ed that we had our free and easy time. She gave us money to spend for our dinner. We went to our room and get rest while up-dating our blog. At 8.00pm, we decided to go out and take our dinner and have some shopping at Queenstown. Thats the end of our activities of the day. At quarter to seven, we have to be at the lobby leaving for Christchurch.