You’ve heard them on radio, memorised lyrics to their songs, watched them on TV and followed them in the Media. Now, AirAsia X, the leading long haul low fare carrier in Asia is giving you the chance to catch 2PM, K-Pop’s latest phenomena, LIVE, in Kuala Lumpur on Friday, November 25, 2011 at Stadium Negara, Kuala Lumpur.

The not to be missed, one night only concert which starts at 8.30pm, is part of 2PMs 2011 Hands Up Asia Tour. AirAsia X, in conjunction with the 1st year anniversary of the long-haul low fare airline’s Kuala Lumpur – Seoul route is the official airline sponsor of the Korean top boy band 2PM Live in Kuala Lumpur. 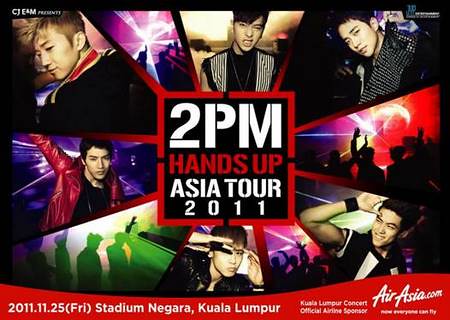 AirAsiaRedTix.com will be selling only the best tickets in town exclusively available online effectively on 9th November 2011. The hottest ticket categories are Rock Pit (RM641*) and VVIP tickets (RM491*).

In conjunction with our sponsorship, AirAsia and AirAsia X will also be offering special one way fares from as low as RM307 (THB2790) from Bangkok, Thailand, RM151 (IDR40900) from Jakarta, Indonesia and RM95 (SGD36) from Singapore to Kuala Lumpur. AirAsia X destinations on offer includes Australia (Gold Coast, Melbourne, Perth) from as low as RM635 (AUD199) one way to Kuala Lumpur. Guests may book online to grab this special offer from now until fares are sold out for the travel period from 22 – 30 November 2011. K-pop fans may grab this opportunity to fly on AirAsia and AirAsia X destinations to Kuala Lumpur to catch the concert. For flight details or to make bookings, visit www.airasia.com.

He adds, “Besides providing us with an opportunity to thank and reward our guests for making this route a success, branding through Entertainment has always been an integral part of AirAsia X’s marketing strategy as it provides us with a platform to connect with our guests in a less intrusive way, in places and situations which they are most comfortable in.”

“Our association with some of the premium brands in Entertainment also provides us with the right platform to challenge the misconception that low cost is associated with low quality. It has also allowed us to build a closer relationship with guests and get them to think about the AirAsia X brand in a favourable way” concluded Darren.

For continuous updates on our latest promotions, contests and cool activities throughout the region, be a fan of AirAsia on Facebook (facebook.com/AirAsia) and follow AirAsia on Twitter at twitter.com/AirAsia