London, July 12 2011 – AirAsia X, the Malaysian based long haul, low fare affiliate of AirAsia has announced that beginning 24 October, 2011, AirAsia X will commence flights from Kuala Lumpur Low Cost Carrier Terminal (LCCT) to Gatwick Airport. The new base for the airline is set to further increase passenger traffic from South East Asia to London and Europe with six flights weekly to Gatwick Airport by mid December.

AirAsia X’s decision to switch from Stansted to Gatwick Airport was to maximise commercial opportunities at Gatwick, to ultimately drive increased traffic flow between UK and Malaysia, and also the various key feeder markets within AirAsia’s network in Asia Pacific which the airline has proven at Stansted airport. AirAsia X guests would be given a wider choice to travel onwards and connect domestically and internationally via Gatwick airport. Public transport and accommodation facilities are easily accessible via Gatwick for guest stop over’s or for those heading towards central London and the surrounding region. 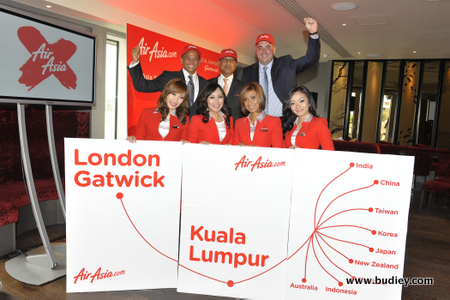 AirAsia X launched its maiden flight into Stansted International Airport (London) in March 2009. The low-cost long haul airline is currently operating six times a week between Stansted and Kuala Lumpur. The route has fast turned Kuala Lumpur into a regional hub connecting three continents, with Australians and New Zealanders flying into the Malaysian capital and connecting on AirAsia X to London. And British and European travellers using AirAsia X’s service to Kuala Lumpur, in turn, hop onto AirAsia’s extensive route network to travel at low fares throughout South-East Asia, to such popular destinations as Vietnam, Indonesia and Thailand.

AirAsia X Chief executive Officer, Azran Osman-Rani said, “Our aim has always been to open up travel for all. The popularity of the London-KL route is further testament to the pent-up demand for long-haul travel, provided the fares are low and the quality is high. That is the combination that we at AirAsia X are offering our guests.”

“Gatwick Airport was chosen as it demonstrated the passion to work with us in realising our objectives to grow passenger traffic between our hubs in Asia Pacific and London. With our new home base in Gatwick, guests would be able to further benefit from the airport’s destination served, airline diversity, and beyond market connectivity potential with faster and cheaper rail connectivity to the city as compared to Stansted. AirAsia X see’s strong potential for the airport as we believe our entry will address the fact that direct services to Asia is significantly underserved from Gatwick,” concluded Azran.

Gatwick Airport Chief Executive, Stewart Wingate said, “We are seeing more and more Britons choosing to travel long-haul, and in particular to explore countries in South East Asia. Malaysia is ranked as one of the world’s top ten leisure destinations and its capital city, Kuala Lumpur, is one of the most visited cities in the world. We are absolutely delighted to have AirAsia X on board to connect Gatwick to this popular region and give the 450,000 Britons who travel to Malaysia each year the opportunity to fly with an airline that offers a high quality service at prices people can afford.

“We look forward to working with AirAsia X to help them meet their growth potential and also ensure our airport continues to serve destinations UK passengers want to travel to, be it for leisure or business.”

Also available are our Fly Thru Services, a service that enables guests on multiple flight travel to perform a single check-in for their original and connecting flights right through to their final airport of destination. With Fly-Thru, guests from London may travel to selective destinations in New Zealand, China, Australia, Thailand, Indonesia and Singapore without the need for immigration clearance or a transit visa in Malaysia. Upon arrival in Kuala Lumpur, guests will be given access to the transit hall, which is directly connected to the departure hall and guests will need to be at the departure gate at least 20minutes before their connecting flight.

The service also eliminates the need to re-check luggage when connecting to the next flight to the final destination.