SPREADING ITS WING FURTHER ACROSS CHINA

BEIJING, 16 MAY 2012 – AirAsia X is expanding its network further into China with the introduction of direct flights to Beijing from Kuala Lumpur.

From June 22, 2012, AirAsia X, the long-haul low fare affiliate of AirAsia will commence 4 times weekly flights from its hub in Kuala Lumpur to Beijing Capital International Airport, offering direct access to the capital of People’s Republic of China. AirAsia X will increase its flight frequency to Beijing from August 6, 2012 onwards, and will commence direct daily services to the capital. 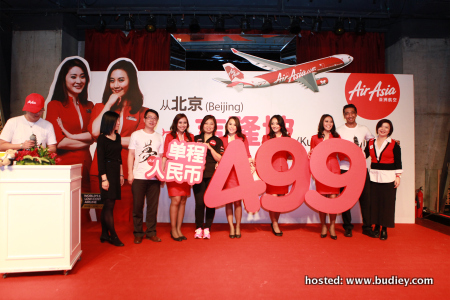 The new service was officially announced today in Beijing. The announcement was made official by AirAsia’s Group Regional Head of Commercial, Kathleen Tan. Also present was AirAsia X’s Head of Commercial, Senthil Balan, business partners and members of the media.

To celebrate this achievement, AirAsia X will be offering launch fares to Beijing from Kuala Lumpur from as low as MYR249*one way on Economy and from just MYR1,129* one way on its Premium Flatbeds. The launch fares are available for online bookings from 17 to 20 May, 2012 for the travel period between 6 August, 2012 to 22 May, 2013. For more details, log on to www.airasia.com.

Kathleen Tan, AirAsia’s Group Head of Commercial said, “We are ecstatic that we are finally here and our network would not be complete without Beijing, the heart of China. Our guests from Beijing have been waiting for years and we are finally able to meet the robust demand for this exciting destination. Our first flight into China took off eight years ago, and since then we have carried more than 12 million guests from seven destinations in China namely Chengdu, Hangzhou, Guilin, Shenzhen, Tianjin, Guangzhou and Chongqing. We are confident travel demand to Beijing will be strong and hope many will take the opportunity to visit Malaysia and use AirAsia as a gateway to the many exotic, far-flung destinations across the region.”

“China National Tourism Administrative named Malaysia as one of the preferred destinations for China tourists. The number of Malaysians travelling to China has also grown tremendously. We are confident that our low fares will help to stimulate and trigger new travel demand, and will help to boost tourism potential on both ends.” she added.

Beijing being China’s second largest city by urban population provides a gateway into China. The country’s political, cultural, and educational centre is home to the headquarters for most of China’s largest state-owned companies and a major transportation hub with a sophisticated network of national highway, expressway, railway and high-speed rail network. Beijing’s Capital International Airport is the second busiest in the world by passenger traffic.

Azran Osman-Rani, CEO of AirAsia X said, “AirAsia X is delighted to offer direct flights between Kuala Lumpur and Beijing Capital International Airport from 22 June 2012. China is a key market for AirAsia X, and our entry into Beijing is another major milestone for us, which supports the Malaysian Government Economic Transformation that seeks to enhance connectivity between Malaysia and Beijing. The launch will allow for new segments of travellers between Malaysia, South East Asia and Beijing, leveraging from AirAsia’s exciting low fares and extensive South East Asia network. We believe our award winning low fare AirAsia X service will be well received in Beijing.”

“At the same time, we will be suspending our flights into Tianjin effective 21 June, 2012, but we will allow all impacted passengers the flexibility to transfer their flight bookings into Beijing (which is 111 km from Tianjin). AirAsia X will be communicating directly to all impacted Tianjin passengers our service recovery measures.” 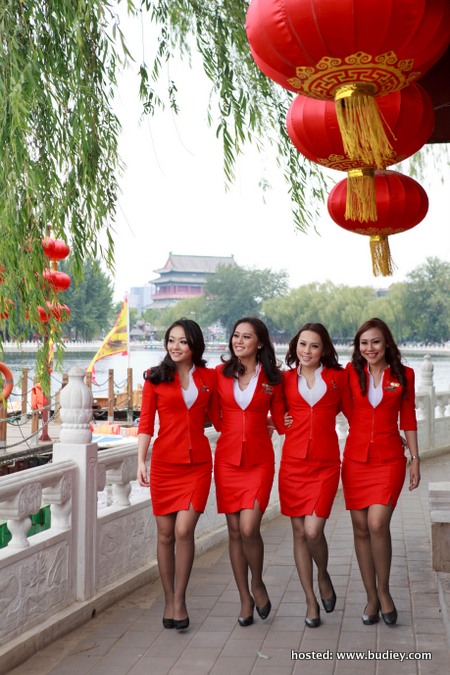 The Beijing – Kuala Lumpur route will be operated on the Airbus A330-300 aircraft with a configuration of 12 Premium flatbed seats and 365 Economy seats.

AirAsia X was the first long-haul, low fare carrier to introduce Flatbed seats, which have standard business class specifications of 20” width, 60” pitch and stretch out to 77” in full recline position.

AirAsia was named World’s Best Low Cost Airline in the annual World Airline Survey by Skytrax for three consecutive years in 2009, 2010 and 2011.

Earn BIG Points with BIG, AirAsia’s Loyalty Programme when you purchase flight tickets and travel packages. Sign up now at tune2big.com to redeem BIG Points for free flights with AirAsia.

Guests can also log on to AirAsia’s one-stop travel portal at AirAsiaGo.com which offers a range of more than 80,000 three-star, five-star and boutique hotels, tour packages and transfers to choose from.

*Promo Fares include airport taxes and fees (all in fares)
Flights and fares are subject to availability and are for one way travel only.