KUALA LUMPUR, 13 MAY 2011 – AirAsia has been named the world’s best airline again, this time for exemplary customer care in its cargo arm.

Sathis Manoharen, Regional Head of Cargo of AirAsia, received the award on behalf of the airline on Wednesday night in Munich. The awarding ceremony was held during the transport logistic/Air Cargo Europe Exhibition, which gathered executives from the air cargo community, airports, airlines, shippers, suppliers and service providers from around the world. 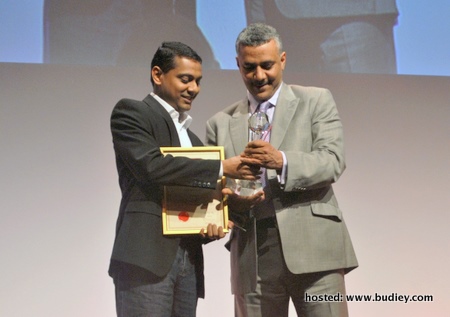 Sathis Manoharen (left), Regional Head of Cargo of AirAsia, receives the Best Air Cargo Industry Customer Care award at the ACW World Air Cargo Awards 2011 awarding ceremony in Munich on Wednesday. AirAsia is the only low-cost airline based in ASEAN to win an award at the ceremony.

“This award reflects how strongly the AirAsia brand has grown in cargo. We are relatively new in cargo, yet we have established leadership in many aspects of this industry. We are proud to be recognized globally, and we are taking this win as a renewal of our commitment to offer high quality cargo service at very reasonable prices. We continue to innovate to better serve our markets,” said Sathis.

AirAsia is the only low-cost airline based in ASEAN to win an award at the ceremony.

Sathis added, “This award has proven that low cost does not mean low quality. We have spent a great deal of time calibrating our processes, which are now metronomic in nature. The result of all of this is being recognised by industry peers, shippers, forwarders and manufacturers as the world’s best airline in customer care for cargo.”

It is the second time for the airline to win an ACW World Air Cargo Award; last year, it was named the Air Cargo Industry New Comer of the Year. It is also the third time for AirAsia to win an award for cargo this year, having earlier won the Fastest Growing Foreign Cargo Airline award from Baiyun International Airport in Guangzhou and the Asia’s Best Low Cost Cargo Carrier award from Aviation Awards Asia in Hong Kong.

AirAsia identifies cargo as a major revenue-generating channel and a huge contributor to its ancillary income. The airline is optimizing the potential of its otherwise empty belly space to bring in cash by offering cargo services at rates considerably lower than its competitors’ and by tapping AirAsia’s extensive network and flight frequencies to reach more destinations and achieve faster delivery time.

AirAsia is strengthening cargo operations in part to protect its bottom line against fuel price increase.

Asia’s largest low-cost carrier has been actively engaging with more cargo agents and large export-import firms in the markets that AirAsia flies to. It is also reaching markets beyond its current route network through other airlines with which AirAsia has special pro-rate agreements. These major airlines extend AirAsia’s reach to more cities in East Asia, the Middle East and Africa.