This new direct flight which will be operating three times a week, is poised to further boost the tourism on the island, in line with the

Tan Sri Tony Fernandes, Group CEO, AirAsia said, “We would like to thank the Prime Minister, Dato’ Sri Najib Tun Razak for officiating this new direct flight between Shenzhen and Langkawi by AirAsia with us today. Last year, Yang Amat Berhormat Prime Minister launched our direct flights from Guangzhou to Langkawi, an island that has promised so much but has never lived up to its full potential. 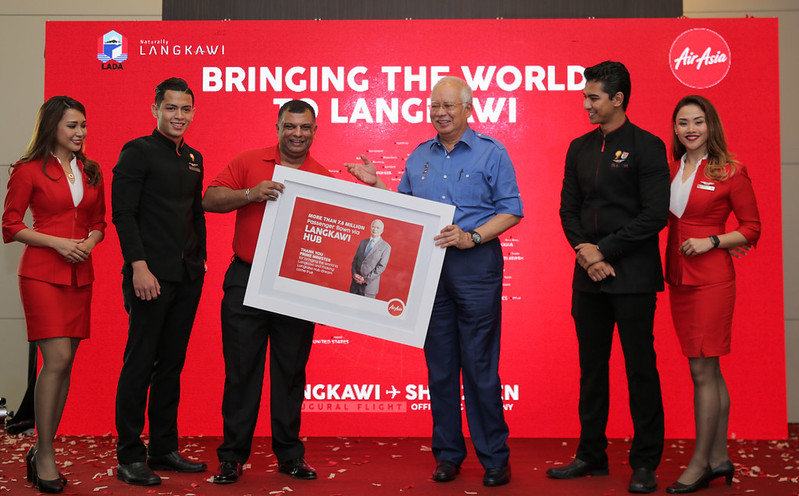 Leadership takes courage and it is with courageous leadership that Dato’ Sri Najib supported AirAsia in reducing the airport tax which for years Malaysian Airports had resisted this. Today, we see that value of his brave leadership. Direct international tourists have increased from 83,754 passengers in 2015 to 187,433 passengers in 2016 – an increase of 120 percent in growth.

This represent a contribution of RM300 million to GDP, based on the 12 times multiplier effect. 2016 was the first year international tourists outnumbered domestic tourists. We are driven by this and already this year we have flown over 1 million tourists to Langkawi with our 238 weekly flights from Langkawi. But we want to get to the 3 million mark and contribute a large part to the Langkawi Development Authority’s (LADA) target of RM9 billion revenue. Our vision is that we will make Langkawi as connected as Phuket, if not greater.

“The proof is clearly there – where airport tax is reduced or where low cost terminals are provided, air travel grows and explodes. This is the second time Yang Amat Berhormat Prime Minister has put the interest of the people first. It was he that we appealed to in 2006 to reduce airport tax at the LCCT which gave AirAsia the chance to really flourish and create Malaysia as the home of Asia low-cost industry.

At that time, MAHB wanted to charge the same amount with full service carriers but we appealed to Dato’ Sri as he saw the potential of low cost carrier. The world recognizes the two different business models in the industry where there are full service carriers and low cost carriers. Where we are most successful is where we have had low cost terminals. This was the key reasons that have brought AirAsia to where we are today,” he added.

AirAsia now flies to seven destinations from Langkawi, with four domestic routes; Kuala Lumpur, Penang, Johor Bahru and Kuching as well as three international routes; Singapore, Guangzhou and Shenzhen. AirAsia also connects Langkawi to 15 countries such as Vietnam, South Korea, Taiwan, and others via Fly- Thru.