Founder and Managing Director of Haute Grandeur, Marinique de Wet presented the supreme awards to the hotel director, YBhg Tan Sri Teo Chiang Hong in a dazzling ceremony attended by owners and general managers of top global hotel and spa groups, industry leaders as well as members of the media in celebration of the best with a total of 522 Awards issued. 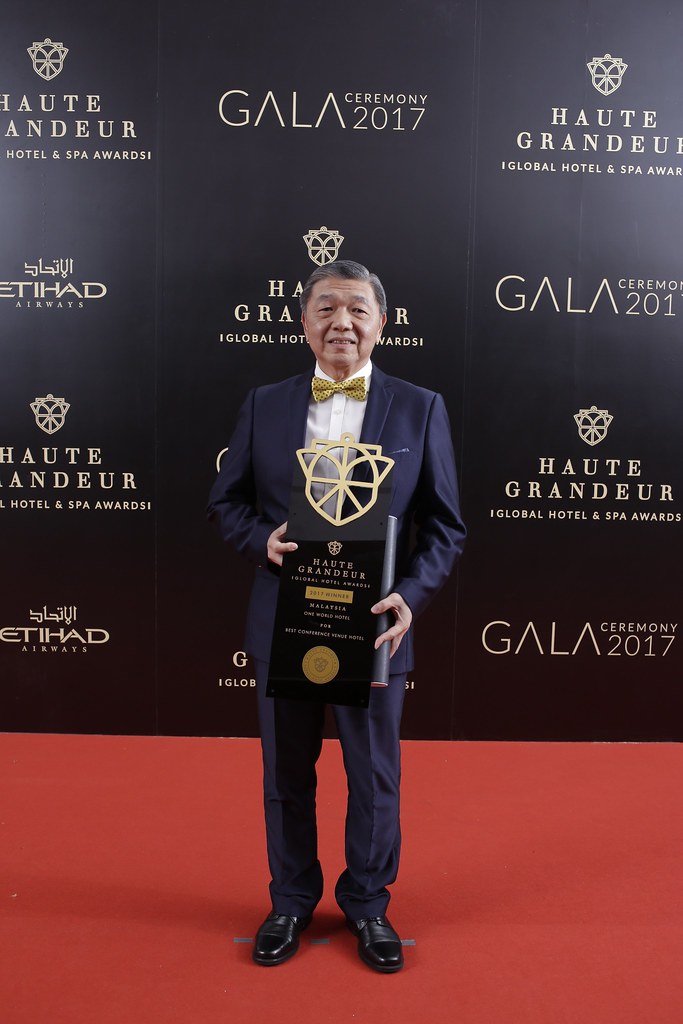 The Haute Grandeur Global Hotel Awards is a recognition granted to outstanding hospitality professionals across 7 continents, 172 countries and 94 categories. Some of the world’s top global luxury hotel and resort brands competed for the most-sought after accolade in overall excellence and greatest contribution to the industry over the past year. Winners are carefully selected through a stringent selection process which include quality feedbacks from guests.

“A Haute Grandeur Award is a guaranteed golden stamp of excellence, and powerful in its ability to amplify marketing, guest perception and revenue. Participating establishments emphasise the value and importance of continuously striving for excellence, and set the standard in the industry. Haute Grandeur promises to raise the bar by awarding only the most exceptional hotels and spas, thereby inspiring establishments to reach even greater heights. Excellence is the drive to exceed all expectations, when it is least expected. Haute Grandeur Awards celebrate values of leadership, hard work, dedication, ambition and success. The nominees are shining examples of what it means to be superlative,” said de Wet.

“What a remarkable year it has been for One World Hotel! We have added another notch to our belt and on behalf of my team, I am extremely proud, thrilled and honoured to be included in such a respectable list of global winners. Whilst rejoicing on our 10th anniversary, we are also celebrating the end of another successful year with more honourable internationally acclaimed awards, despite many market challenges. Our world-class conference facilities and personalised service are undoubtedly our assets. One World Hotel will continue to thrive and strive to be the best. We cannot thank our valued guests enough for all the continuous and faithful support in helping us achieved our vision to be the leading 5-star business hotel,” said Chris Niuh, the General Manager of One World Hotel Petaling Jaya.

American Cristie Kerr crowned the 8th edition Sime Darby LPGA Malaysia champion with a dramatic one shot victory concluding the final game, defeating Danielle Kang, Shanshan Feng and Jacqui Concolino and finished with a 15-under 269 on Sunday, 29 October 2017. The seasoned pro, Kerr made her 20th career victory and became the first player in her 40s to win the LPGA. The tournament was held at the TPC Kuala Lumpur from 26 – 29 October 2017 with 78 players, comprising 64 players from the LPGA tour and 14 sponsor exemptions competed for the total prize of USD1.8 million purse.

One World Hotel played host to some of the world’s best female golfers including the winner, the runner ups and other top ranking golfers namely Lydia Ko from New Zealand, Sung Hyun Park and In Gee Chun from South Korea, Brooke Henderson from Canada and Stacy Lewis, Jessica Korda and Nelly Korda from United States of America.

“We are truly honoured to be the ‘annual’ official hotel for the prestigious Sime Darby LPGA Tournament since its inauguration in 2010. I am very pleased to know that the players had an amazing experience being looked after by our One World team. With 8 years’ experience in hosting these international players, we will continue to maintain a high standard of service and not rest on our laurels. We will also ensure that personalised service is consistently delivered to satisfy our guests’ needs. We certainly look forward to welcoming them again in the near future,” said Mr. Chris Niuh, General Manager of One World Hotel.

“TPC Kuala Lumpur is just a stone’s throw away from One World Hotel, making their daily commute a breeze during the 4-day event. It also gave us an opportunity to showcase our contemporary guestrooms and suites equipped with a complete range of cutting edge amenities, facilities and services,” added Mr. Chris.

The 5-star One World Hotel features 438 newly-refurbished contemporary guest rooms and suites emphasising sophistication, elegance and innovation complete with luxurious amenities, facilities and services. Adjoined to the award-winning 1 Utama Shopping Centre, the hotel is nestled in the heart of Petaling Jaya’s business district and just minutes away from down town Kuala Lumpur and Kuala Lumpur International Airport (KLIA).

The hotel showcases unparalleled world-class conference and recreation facilities with a total of 5000 sq metres of space comprising the Imperial Ballroom that can accommodate 2000 persons banquet style and 15 other function rooms to choose from. The opulent ballroom is further enhanced with a retractable giant 15ft x 41.6ft LED display screen to enrich conference visual experience.

One World Hotel displays a fine culinary parade of four innovative restaurants and bars, skillfully fusing the creativity cuisine of both East and the West.

Luxuriate at our Fitness Centre, where you can work-out in a sophisticated gymnasium then indulge with a relaxing massage at [email protected] spa.