Calling all Britney fans to join us at the “FEMME FATALE BALL!

Are you a big Britney fan? Are you a Britney maniac? Want to win fabulous prizes? Here comes a big question, do you want to win a flyaway trip to catch the pop princess live? If your answer is yes, then come join us at the Femme Fatale Ball on Thursday, 28th April 2011 at Zouk Club KL at 10pm.

For fans who have bought the Femme Fatale albums, just show the Proof of Purchase (B) coupon (found inside the album) to enter the event for FREE! One coupon will allow admission for 1 person only! Get yourself there between 10 – 11pm as we have loads of fun Britney activities lined-up for fans to stand a chance to win attractive prizes such as Sony Ericsson Yendo™ handphones, Radiance perfume and club membership from Celebrity Fitness!! Be sure to be there to get your hands on these prizes!!

The main highlight of the event is to win the grand prize to catch the pop princess live! How can you make that happen?

Britney Spears’ 7th studio album entitled Femme Fatale, is a tribute to bold, empowered, confident, elusive, fun & flirty women and men. Executive produced by Max Martin & Dr.Luke, Femme Fatale debuted at No. 1 on the U.S. album chart upon release. The chart-topping entry also makes Britney the first female ever to have six No.1 album debuts, and marks the second biggest album the debut of the year. The album also debuted at No. 1 in Canada, Australia and Korea and entered in the Top 10 in 15 other countries.

Come join us this 28th April at Zouk Club and you may stand a chance to win fabulous prizes sponsored by Celebrity Fitness, Britney Spears fragrances by Luxasia, Sony Ericsson, Zouk Club and Sony Music Malaysia.

Start blocking your calendar now and we’re sure you will not want to miss it!!

For more details of the event and contest, log on to http://bit.ly/femmefatalekl 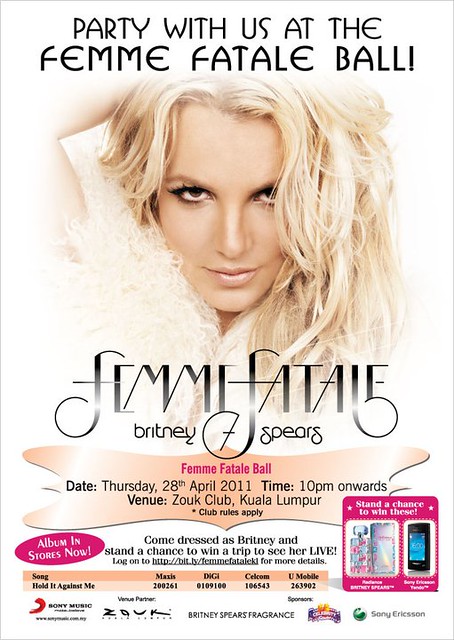