Five of South Korea’s hottest stars were in town for Malaysia’s biggest fan meeting of the year – ‘Hotlink Race Start Season 2 in Malaysia Running Man Fan Meeting’! All thanks to the organiser, ONE HD, fans of Running Man in Malaysia had the rare opportunity to catch all their favourite stars in just one event! 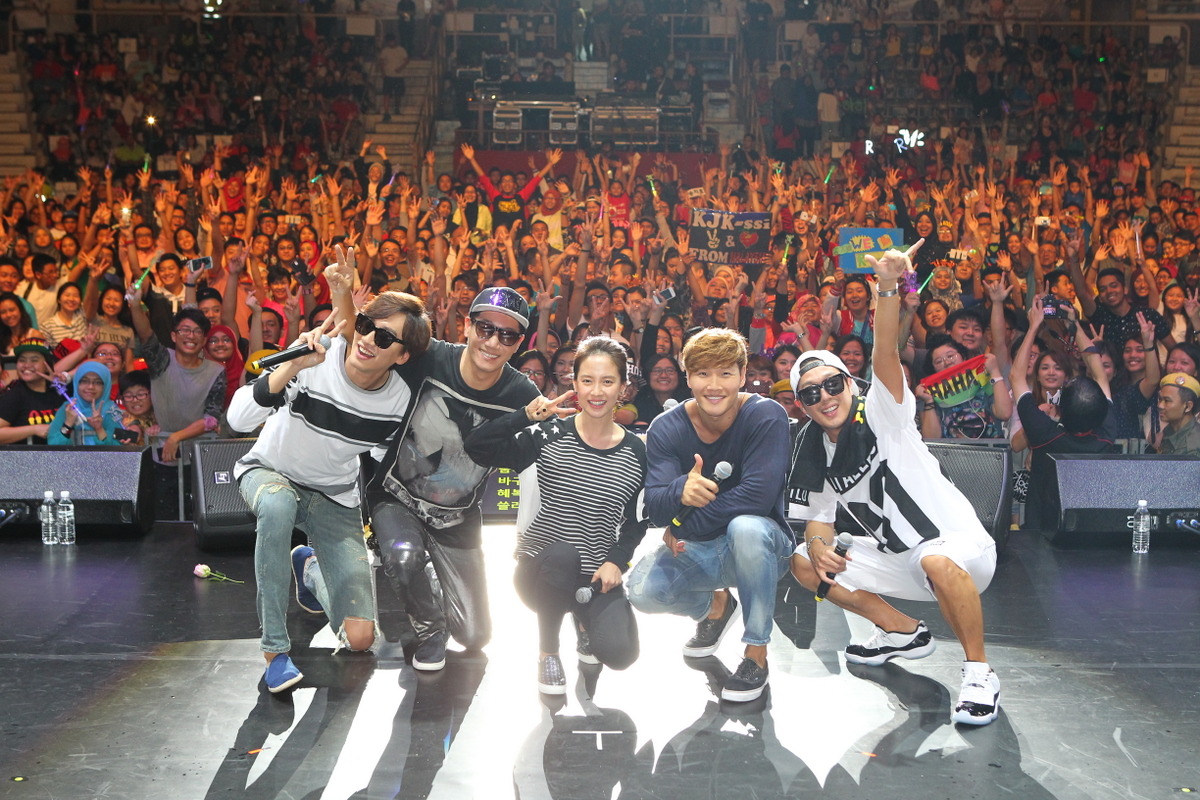 The inaugural ‘Hotlink Race Start Season 2 in Malaysia Running Man Fan Meeting’ had all the elements of an interactive musical concert – complete with stage games, song performances and video montages of memorable scenes from the series. The seasoned entertainers delivered charming performances and tickled the audience with their quirky banter and antics. One of the highlights of the evening was when the ‘Easy Brothers’ Lee Kwang Soo and Ji Suk Jin, surprised the fans with a parody of ‘Trouble Maker’ sparking roaring laughter and cheers.

The evening was especially significant for 23 lucky Malaysian fans, who won a once-in-a-lifetime opportunity to join the stars on stage for fun and games. In the spirit of Running Man challenges, the entertaining stage activities included stage games such as sharing Pepero between Lee Kwang Soo and a lucky fan which ensued immediate hilarity to the entertained audience. The entire cast also joined an image guessing game that put fans and the cast to the test by imitating the image on screen for the last person to guess correctly. The two-hour long fan meet extravaganza closed on a high note with 2 encore performances by all the cast members.

Over 4,000 Malaysian fans gathered for the autograph session

Earlier in the day, approximately 4,000 boisterous fans greeted the stars at the autograph session, which was held at Paradigm Mall. Mobs of excited fans from all across Malaysia arrived at as early as 6.00am to get a good vantage point of their favourite Running Man stars. The autograph session saw the Running Man cast signing exclusive Race Start posters for winners of sponsors’ contests and VIP ticket holders of the fan meeting.

“This is ONE HD’s first and successful ticketed event in Malaysia. We are glad that through the channel, fans and viewers are able to interact with their favourite South Korean television stars in close proximity. We are definitely looking forward to bringing more top-notch entertainment content to our audiences in Malaysia on screen and beyond,” said Virginia Lim, Vice President, Asian Content, Networks, Asia, Sony Pictures Television.

The massive success and fantastic reception of the event reflected the popularity of the series. Running Man is the No.1 rated show in its timeslot across all pay-TV channels in Malaysia among pay-TV audiences 4+ in the year to date. In Malaysia, the ratings are higher than all the other channels, including the free-to-air channels.

In addition to the title sponsor Hotlink, the fan meeting was sponsored by Cream-O, with supporting sponsor Red Bull No.1 Energy Drink in Malaysia and supporting partner Paradigm Mall.

‘Hotlink Race Start Season 2 in Malaysia Running Man Fan Meeting’ may be over but the race with Running Man continues on ONE HD with new episodes premiering on every Friday at 11.45pm.

ONE showcases the latest South Korean drama and entertainment programs on an exclusive and first-run basis. These include selected drama, variety and music shows that premiere within 3 – 5 weeks of their debut broadcasts in Korea. Viewers can catch the biggest stars and hottest names in Korean entertainment, from young and trendy idol dramas to popular soap operas, along with the current variety buzz and the top K-pop hits.

In addition, ONE has also regularly brought South Korean artistes on promotional tours to meet with fans. Successful events have included drama stars like Zo In Sung (That Winter, The Wind Blows), Lee Hyun Woo (To the Beautiful You), Lee Dong Wook (Scent of a Woman), Kim Sun-A (Scent of a Woman), Jang Hyuk (Midas), and K-pop boy group BTOB; as well as the resoundingly successful Running Man fan meet in Singapore.

ONE HD is the high definition feed of ONE which is available in Australia, Brunei, Cambodia, Indonesia, Malaysia and Singapore. See www.onetvasia.com for more.

Running Man on ONE

Enjoying a great following in South Korea on SBS, Running Man is also extremely popular on ONE.

New episodes of Running Man premiere on Fridays at 11.45pm first and exclusively on ONE. Repeats air on the following Friday at 7.40pm, as well as on Saturdays and Sundays at 11.15pm. ONE HD is available on Astro Ch 393