When Manchester United was crowned Champions of England for a record breaking 19th time in May 2011, the Club decided to take the trophy across the world for celebration. Manchester United with one of their principal partners, DHL, brings the DHL Champ19ns Trophy Tour to Malaysia in April.

Manchester United partners in Malaysia: Maybank, Mister Potato and Epson have teamed up for the first time and leveraged on this opportunity to organize an Ultimate LIVE Viewing Party for the club fans in Sunway Lagoon @ Amphitheater on 22nd April 2012. 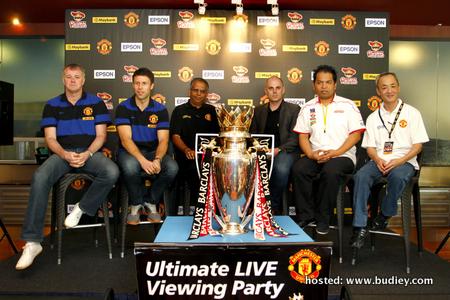 With Manchester United legends Gary Pallister and Ronny Johnsen present, the party at Sunway Lagoon was made all the more special as football fans got a chance to get up close and personal with them as well as see first-hand the Premier League Trophy.

Manchester United has over 4.5 million dedicated fans in Malaysia and this is a great opportunity for them to engage with the club. As part of the celebration, the fans were also treated to a live match viewing of MU versus Everton at the Sunway Lagoon Amphitheatre. There were lots of exciting games, lucky draws and freebies given before the match by Maybank, Mister Potato and Epson.

The presence of the Man Utd Legends has also created a wave of excitement for all the football – loving throughout the country. 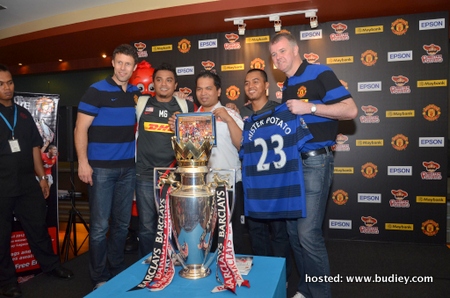 About Mister Potato
Mister Potato is a familiar household name and is one of Malaysia’s top potato snack brands. It is part of the Mamee-Double Decker conglomerate and in July 2010, Mister Potato became the Official Global Snack Partner of Manchester United. Mamee-Double Decker Chief Executive Officer Datuk Pang Tee Chew said the decision to partner with Manchester United was because Man Utd is the world’s number one football club and football is the world’s number one sport, ensuring a synergy with Mister Potato that would ensure a “number one marketing platform for the company”.

“We want to leverage on the partnership to provide a global marketing solution for increasing distribution and sales globally. Half of the Man Utd fans are in Asia and we are looking to solidify our position as the Number One stacked chips brand in Asia through this sponsorship deal,” he said. With Australia, Singapore, Russia, Netherlands and the Maldives being its top five markets, the company plans to carve out a bigger share of the snack market in Southeast Asia and Asia as a whole including Korea, Japan, Hong Kong and China. It also hopes to increase its market share in Africa and South America as well as the European region where it has already carved a footprint.

The Mister Potato brand of 20 years has long stood for its high quality potato chips and crisps, innovation in potato snacks, bringing celebration and continuously thrilling its followers with experiences that even money can’t buy. From opportunities to explore Old Trafford to personal meetings with their football heroes, the brand constantly brings fans even closer to the game they love as proven from “The Ultimate Manchester United Experience” Contest brought by Mister Potato in 2011. Winners of the contest were absolutely thrilled and delighted that their wildest dreams of meeting their favourite players came true, thanks to Mister Potato.

Mister Potato contributes more than 30 per cent of Mamee-Double Decker’s business and has approximately 14 per cent market value share in the snack food category which is continuing to grow. When asked to reveal the secret of Mister Potato’s success, Datuk Pang attributed it to a combination of factors which included 19 years of consistent brand building and quality that is on par with global standards, including the use of the highest grade of handpicked Atlanta, Dakota Pearl and Hermes potato.

He added that low sugar and high dry content, colour, taste, size and texture were among some of the selective requirements of the company’s “undeniable No Compromise” potato chips which adhere to a trans-fat free policy as they are cooked only with vegetable oil.

With 190 million followers in Asia, Mister Potato is expected to make inroads into new territories in Asia and around the world. Widely known to be fun loving with its quirky Mister Potato and Amigo mascots, everyone can look forward to crunchy, high quality potato chips and a whole lot more in the future.