KUALA LUMPUR, 15 January 2011 – The upcoming Justin Bieber My World Tour in Malaysia in April will also be an opportunity for fans to contribute to charity.

In conjunction with the concert, the presenting sponsor Tune Talk Mobile Prepaid is on a mission to ‘Sponsor a Justin Bieber Fan’.

“We will work with a charitable organisation to share the joy and fun in watching Justin Bieber live with underprivileged kids. Interested parties will be able to take part by purchasing VVIP seats worth RM1,000 each that will go towards sponsoring 5 kids to attend the concert,” said Tune Talk CEO Jason Lo. 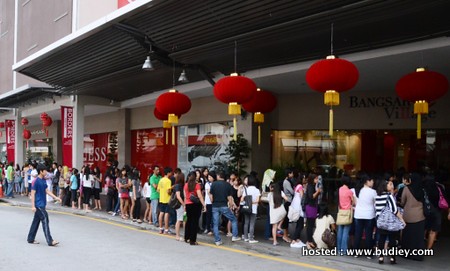 Promoted by Midas and JS Concerts and jointly organised by Tune Tones and Fat Boys, Justin Bieber My World Tour will be held on 21 April from 8.30 pm at Stadium Merdeka, Kuala Lumpur. Tickets are priced at RM498, RM358, RM288, RM188 and RM98 each.

Meanwhile, Tune Talk Mobile Prepaid today holds a one-day only exclusive ticket sale for its subscribers at the Bangsar Village 2 shopping complex in Bangsar here. This is ahead of nationwide sale that will kick off Sunday 16 January.

Ticket counters open at 12 pm with numerous activities lined up including singing, dancing and fun contests at the Bangsar Village 2 concourse area right through to 10 pm. Bieber fans who were Tune Talk Mobile Prepaid subscribers started lining up at Bangsar Village 2 as early as 4 am!

“This is a special treat for our loyal Tune Talk Mobile Prepaid subscribers. Justin Bieber My World Tour is undoubtedly going to be one of Malaysia’s biggest music events this year and we would like to share this with our subscribers,” said Lo. 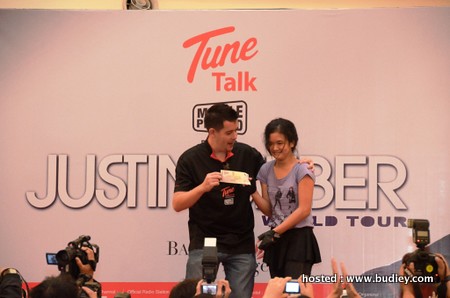 A total of 17,000 tickets will be on sale and are available on a first-come, first-served basis. Only manual sale over the counter will be performed for Tune Talk Mobile Prepaid subscribers on Saturday, with Tune Talk sign-up booths also available.

From 12 midnight tonight tickets will be available online from AirAsiaRedTix at www.airasiaredtix.com and TicketPro at www.ticketpro.com.my, as well as over the counter at TicketPro and AirAsiaRedTix outlets.

The Canadian Pop R&B singer was discovered in 2008 through his YouTube videos landed a recording contract with Island Records offered by L.A. Reid. His debut single “One Time” was released worldwide during 2009 and charted within top 30 in over ten countries. It was followed by his debut release, My World, in November 2009 which certified platinum in the United States. His first studio release, My World 2.0 was released in March 2010 debuted at number one and within the top ten of several countries and was certified platinum in the United States.

Justin Bieber My World Tour In Malaysia is brought to you by Midas Promotions, in collaboration with JS Concert Productions, Fat Boys and Tune Tones with Tune Talk Mobile Prepaid as the presenting sponsor.

More information on Justin Bieber My World Tour is available on www.rockthisjoint.com.my.