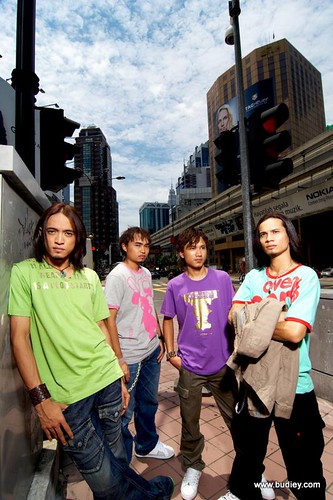 Kicked off in 1999 with their first album, presenting their hits single ‘Sejarah Mungkin Berulang’ (which literally means History May Repeats Itself); New Boyz surfaced into Malaysian music scene with pre-teenage identity. At that time, Tomok as the vocalist was only 15 years old. New Boyz was initiated with Tomok, Syuk as the bassist, Jay as the lead guitarist, Lan as the second guitar and Along as the drummer. The line-ups stayed as such for 2 albums until at the third album, Syuk left the band because of his personal commitment. (And we respect his decision). Syuk’s position was replaced with Zack until now.

Ever since the fifth album in 2004, New Boyz has been changing their members as Jay, Lan and Along quit in pursuing their own path; and being replaced by Rizz and Ristoe, in guitar and drums accordingly.

Until 2006, New Boyz had 5 albums and 1 compilation album of their best songs. Within the same year, New Boyz was busy gathering and perfecting their materials for the sixth album where most of the songs were produced solely by the band members themselves. By the end of the year, New Boyz was of 4 people, each with different personalities under one concept; pop rock, and vigorously accepting and attending performance invitations all over Peninsula Malaysia, Sabah & Sarawak, Singapore, Brunei and Indonesia.

By 2007, New Boyz is back with one final adjustment in the form of Afiez as the lead guitarist, taking over Rizz’s position. Hence, this is New Boyz consisting of ‘4 generations of albums accomplishment’; Tomok, Zack, Ristoe and Afiez. New Boyz is back with “Semula Padaku” as their seventh album, and better than ever.

In the midle 2008, Afiez, Ristoe, Tomok dan Zack had make a new ‘single’  which really up to date. After  their wrote and compose a few song,their had  choose the best of ‘single’.they had create a fresh melody  being cathay  so that the crowd can accept with their NEW AND FRESH SONG. MORE TO EASY LISTENING.

In the same time,contract between newboyz and SRC were expiredand make a COME BACK with new simple name from New Boyz to NB after more then 10 years formerly known as a New Boyz. They have to open their own recording studio

After a couple month,nb have been succed to create and records ‘kau pergi’ and ‘terima kasih (hero)’ song.in the final processing recording,all of  information about  NB can see in the cover album of this single. Nb had to registed  this new song for copyright and also go to all radio station for promote this new song.