The definition of ‘destiny’ or ‘fate’ is described as a predetermined course of events, and it is by way of a series of opportunities, events and experiences, audiences have now found themselves under the spell of one of Sony Music Australia’s latest signings – Timomatic (aka Tim Omaji).

Setting the public’s imagination alight with his jaw-dropping performances on TV series So You Think You Can Dance? and Australia’s Got Talent , there is no doubt that Timomatic is an extraordinary artist, who’s set for even further success with the release of his official debut single release SET IT OFF.

Timomatic describes SET IT OFF as “an upbeat party-starter, a big summer-track, it’s a dance anthem. The title is a command – “To all my people on the dancefloor, Set it off” – and it’s a challenge to lose control, lose all your inhibitions and just have a good time.” 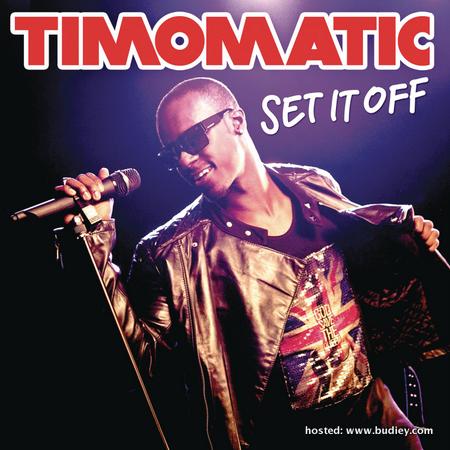 At an early age Timomatic’s love of music and performing was increasingly apparent to all those around him. “My parents were always really into music; my dad played guitar and we’d always sing and dance around the house. When I was about nine my family joined a family band and started performing, and I was the percussionist for that band. In the intermission of those shows they’d let me come on and do my Michael Jackson impersonation. I was really into Michael Jackson at that age, and I learned how to mimic him really well, and I guess that’s how it all really began to kick off for me as a performer.” says Timomatic.

At fifteen, Timomatic – as then christened by his mates, because of his hip-hop dancing skills – was already making a name for himself in the dance world, securing a part-time position as Artistic Director/Choreographer of a dance company in Canberra. By the time he turned eighteen, Timomatic had firmly decided that performing was his one true destiny.

“When I made the decision to be an entertainer, I decided I wanted to sing as well as dance. After concentrating on dancing for a few years, In 2008 I went to music school for a year and I got a Diploma in Entertainment, majoring in vocal training – I did this because I wanted to get my vocals and music up to scratch; that was me paying attention and focussing on my music. In 2009 I appeared on the TV series So You Think You Can Dance, in 2010 I was cast in the lead role in Fame – The Musical, which I couldn’t complete because of an injury, and then earlier this year I was a finalist on Australia’s Got Talent 2011.”

Destiny calls, and now Timomatic is ready to release his first official single – the infectious and dynamic, SET IT OFF, co-written with, and produced by hot production team DNA (Stan Walker, Marvin Priest, Jessica Mauboy).

“In a global sense, the first thing I want people to know about me as an artist is SET IT OFF. It shows off my energy and my musical style, and the video shows just how much I love to dance. I really believe that SET IT OFF is the first ‘official’ sound of Timomatic – it’s the closest I’ve ever come to finding a perfect representation of me.

“I love artists like Usher and Chris Brown – those are the kind of artists that understand the power of visual alongside great music; their music inspires movement. I want to achieve exactly that with my music. I want my music to inspire movement, positivity, and a really good time,” says the performer who has already found himself being requested to support the likes of Janet Jackson, Flo Rida, and Salt ‘N Pepa on tour.

“I consider myself to be an all-round entertainer; I feel that singing and dancing are synonymous with each other. When I sing it makes me want to move because the music inspires me, and when I dance I wanna express it through my voice as well. I can’t do one without the other – it’s a package deal,” laughs Timomatic, who choreographs every move, and all his performances himself.

Timomatic album planned for release in 2012.