Universiti Putra Malaysia (UPM) today launched a special aircraft livery with AirAsia, the world’s best low cost airline for nine consecutive years in celebration of its academia – industry partnership. The livery was designed by the Faculty of Design and Architecture of UPM and are now proudly displayed on AirAsia’s Airbus A320-200 aircraft with the registration number 9MAQD.

The idea of special UPM aircraft livery, to be designed by the faculty came about as a result of a discussion between UPM’s top management led by Vice-Chancellor, Prof. Datin Paduka Dr. Aini Ideris and AirAsia Group Chief Executive Officer, Tan Sri Tony Fernandes in AirAsia’s office on 20 June 2016. 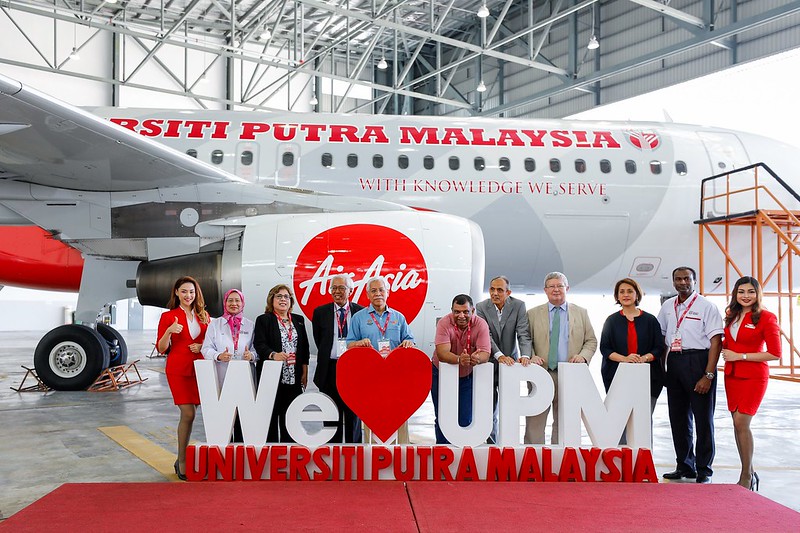 Prior to the discussions, Tan Sri Tony was appointed by the Ministry of Higher Education as one of the chief executive officers in the [email protected] Programme in UPM for the years 2016/2017 to share his experiences and knowledge in relation to the corporate world with UPM students and staff. Tan Sri Tony shared his experiences with UPM residents in Serdang in April 2016, whereby he spontaneously announced UPM as AirAsia’s adopted University.

Prof. Datin Paduka Dr. Aini said “We are very pleased to be the first University to have a special aircraft livery on an AirAsia aircraft, and we are very grateful and thankful to Tan Sri Tony Fernandes and the management of AirAsia for their generosity and bringing UPM branding to fly high in the blue skies. As UPM’s strategic partner, Tan Sri Tony had set aside the commercial aspects of this project but had stressed on the importance of knowledge and why institutions of higher education should be uplifted.”

Tan Sri Tony Fernandes, AirAsia Group Chief Executive Officer said, “When I announced last year that AirAsia would adopt UPM, I promised I would get more involved. This special livery is proof of that commitment. And that’s just the start. We are also working on other initiatives that will benefit both the university and AirAsia, including student and staff mobility, an internship for students as well as executive and research programmes centred on aerospace. AirAsia and UPM have a unique relationship, and we look forward to deepening those ties as we explore even more potential collaborations in the future.” 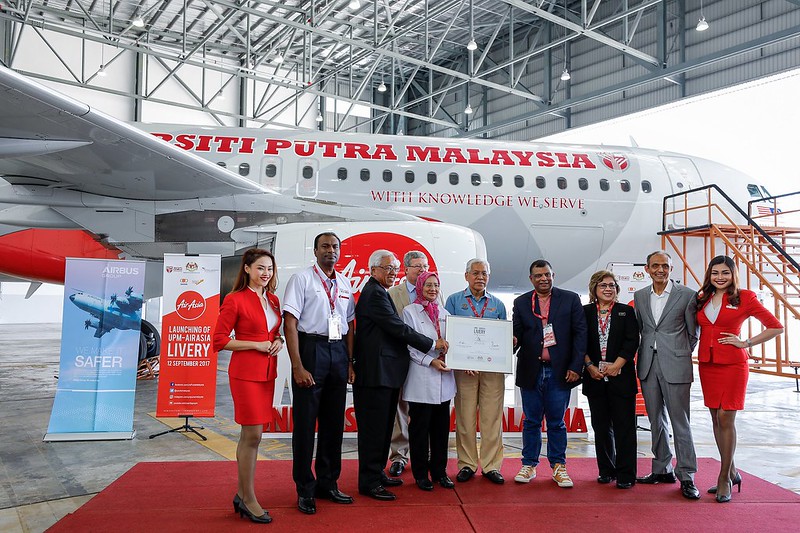 “UPM would also like to thank the Minister of Higher Education, Dato’ Seri Idris Jusoh for his commitment, support and assistance in the brainstorming of the [email protected] Programme,” she said.

“A sincere gratitude is also dedicated to sponsoring partner, Sepang Aircraft Engineering (SAE), an airbus company who has provided an aircraft hangar for today’s ceremony,” she added.