TGV Cinemas, one of Malaysia’s leading exhibitor and multiplex cinema operators is poised to provide more than just great blockbusters to customers whose interest goes beyond movies. 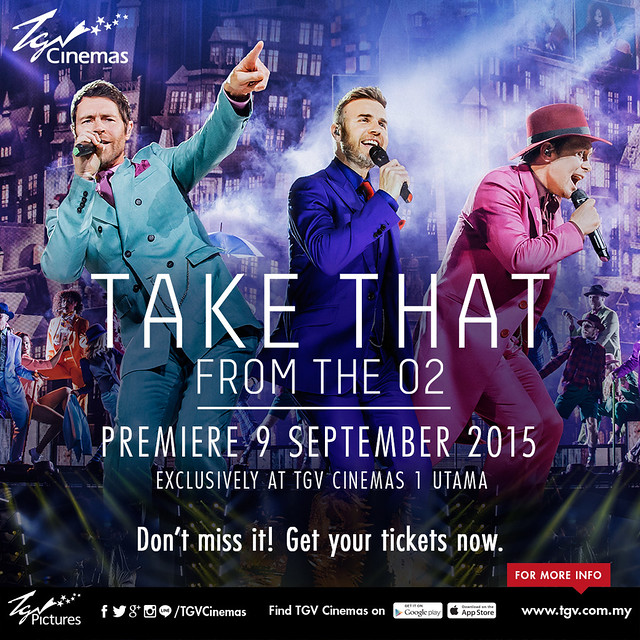 “This is part of our continuous efforts to expand the definition of cinema entertainment and cater to the interest of those who enjoy documentaries, music and sporting events,” said Celeste Koay, Senior Marketing Manager of TGV Cinemas.

“Next in line, we are excited to be the exclusive cinema to screen the famous 1990s English pop group, Take That’s live recording of their concert in the O2 arena in London,” added Koay. Captured in stunning HD and with incredible surround sound, the concert which is part of their current Europe tour is a must watch for diehard Take That, and what better way to enjoy the concert than in the comfort of TGV Cinemas’ cinema halls.

With the option of the premiere or standard screening, music lovers and fans of Take That can enjoy the live recording either in TGV Cinemas 1 Utama, TGV Cinemas KLCC, TGV Cinemas Sunway Pyramid, TGV Cinemas Tebrau City and TGV Cinemas Gurney Paragon.

Exclusively for those who are vying for the premiere screening on September 9, 2015 they can enjoy a scrumptious meal (1 starter + 1 main course) and experience the screening in INDULGE, TGV Cinemas’ luxury cinema for only RM70. Alternatively, enjoy the screening together with a classic chicken or beef burger meal from Chill*X (with fries and smoothies) for only RM40. In addition, TGV Cinemas MovieClub members can also get 10% discounts.

Standard screenings will be available on September 12 and 13, 2015 for RM15 per ticket.

“This is not our first time offering alternative content to our customers. In the past, we have screened the FIFA world cup, concerts by G-Dragon, Anuar Zain’s Tiga Dekad, Justin Bieber’s Believe and most recently, the finals of Dota2 which amassed an overwhelming support by the gaming community,” shared Koay. She went on to add that the response from the public for such non-movie related content has been very encouraging therefore the cinema chain is making a concerted effort to bring in more similar content.

As such, TGV Cinemas will be screening other exciting content in due time which includes the legendary former Pink Floyd member, Roger Waters’ The Wall concert later in September. “Other things we hope to screen in the near future are more documentaries, classics and family favourites,” said Koay.

For those who would like to watch the IMAX® 3D documentaries, tickets are priced at RM15 and are available in all four of TGV Cinemas’ IMAX® locations – TGV Cinemas Gurney Paragon, TGV Cinemas Sunway Pyramid, TGV Cinemas 1 Utama and TGV Cinemas Tebrau City. Each theatre boasts the same IMAX®’s cutting-edge technology and customised theatre geometry whereby viewers can enjoy crystal-clear images and powerful surround sound that that will make them feel as if they are in the movie.

For more information about the IMAX® documentaries, the Take That screening and other content or to purchase tickets, please approach the ticketing counter at the respective TGV Cinemas locations, via the TGV Cinemas Mobile or website: www.tgv.com.my