MTV has turned the spotlight on fans! After two weeks of fans’ voting, award-winning Malaysian singer, Stacy (aka Stracie Angie Anam) emerged from 28 local acts to be Malaysia’s #MostWanted Act to perform as the opening act at MTV World Stage Malaysia 2015 at Surf Beach, Sunway Lagoon on Saturday, 12 September 2015. Additionally, after poring through over 600 entries, MTV announced three candidates who scored their mentorship stints under MTV Breaks ignited by Xpax at MTV World Stage Malaysia 2015: 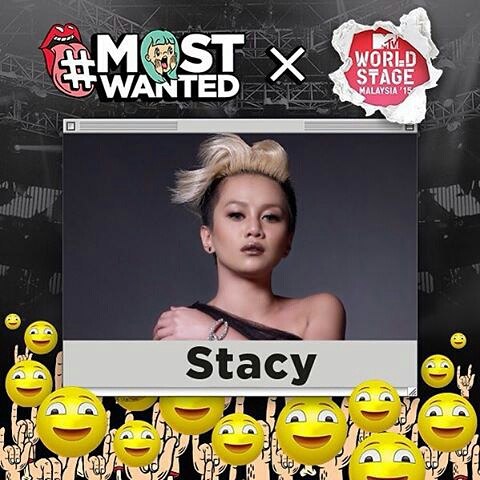 LAST SHOT TO WIN FREE ENTRY TO THE SHOW THROUGH SHOW PASSES AT WORLDSTAGE.MTVASIA.COM AND SCORE EXCLUSIVE MEET AND GREET PASSES AT THE MTV WORLDSTAGE ROADSHOW ON 6-7 SEPTEMBER

Paras Sharma, Vice President, MTV & Digital Media, Viacom International Media Networks Asia commented: “Our focus was to turn the spotlight on fans and showcase talent in front of the camera and behind the scenes. The fans have spoken and chosen Stacy as their #MostWanted local act to open the show! And we are thrilled to be able to offer young creative talents a break to kick-start their aspiring careers.”

Award-winning Malaysian singer, Stacy (aka Stracie Angie Anam) had a humble beginning when she started out as a singer in local clubs to help support her family at the age of 16. Early on, Stacy participated in a few notable singing reality shows, but Stacy rose to fame after winning the sixth season of Akademi Fantasia in 2008, receiving 43 percent of over 3.8 million votes.

Her debut album, “Aku Stacy” was released in March 2009. Since then, the 25-year-old from Kota Kinabalu has been on a fast-track to stardom at home, having released two other albums, “Stay-C” and “Stacy #1” in 2011 and 2014 respectively with Warner Music Malaysia, where the latter album is also released in Singapore, Indonesia and Brunei. Proving her popularity over the last seven years, Stacy has bagged more than 12 awards locally, including two awards at Anugerah Bintang Popular Berita Harian and Album #1 at AIM Kulit Album Terbaik last year. Also known as the “Malaysia Dancing Queen”, she has performed on a number of local shows and made numerous TV appearances.

Out of over 600 submissions and a shortlist interview process, two young Malaysians and one Singaporean emerged as the chosen candidates for MTV Breaks ignited by Xpax. The inaugural launch of the Asia multi-platform campaign offers big ‘breaks’ to three talented, young creatives who will get the opportunity for a stint as a photographer, content creator or motion graphics designer at this year’s event. Each of them will gain first-hand experience of what it is really like to work on the production of a large-scale, global broadcast live music event, and have their work featured on various MTV platforms.

Farah is currently working as a freelance on-air producer. She recently graduated with a Diploma in Communications and Media Management from Temasek Polytechnic, Singapore. In 2013, she was selected to be part of Baybeats’ Budding Writers Program. View her MTV Breaks winning entry HERE.

“I love making things. I entered MTV Breaks to gain experience, to learn and to grow. And I love that I get to do what I hope to make a career of through MTV Breaks.” – Farah Firzanah

“Farah showed us she was inspired by how music brings people together at events and festivals, which is a great angle to take. And her work stood out because she has a flair for narrative and storytelling in her work.” – Sari Trisulo, Executive Producer, MTV World Stage Malaysia (Mentor)

20-year-old Tan Han Hui is Malaysian-born, but currently based in Singapore as a final year student in Motion Graphics and Broadcast Design at Nanyang Polytechnic. She will be mentored by the Head of Creative at MTV Asia, Andrew Lo. Working alongside the rest of the creative team, Han Hui will conceptualize and independently create select stage LED content and animated show branding to be used during the show.

Han Hui enjoys working with different mediums, with strong interest in crafts and illustrations. Most recently, Han Hui undertook a project for the National Day Parade 2015 in Singapore with her classmates and created a motion graphics piece for Chapter 6 of the parade’s show. View her MTV Breaks winning entry HERE.

“Seeing my work up on large LED screens at the Padang during Singapore’s Golden Jubilee thrilled me and this is why I entered MTV Breaks. I hope to get a head-start in experiencing the media industry and can’t wait to meet the people working on this event. It will definitely be my most treasured moment.” – Tan Han Hui

“On top of her impressive portfolio, Han Hui has got the most sparkles of eagerness and creativity in her eyes during our interview after her submission.” – Andrew Lo, Head of Creative, MTV Asia (Mentor)

23-year-old Aizat Ady Ikram bin Abdull Ropha is a passionate music photographer based in Kuala Lumpur, Malaysia. He is a fresh graduate holding a degree in Creative Photomedia from UiTM in Puncak Alam. Better known as Ady, he will be mentored by top global celebrity-entertainment photographer and coach, Kristian Dowling and join an elite pool of MTV official photographers at the event. Working closely with the MTV Communications department, Ady will be part of the team that creates official MTV photos, which will feature on MTV’s digital platforms and get promoted through press content. View his MTV Breaks winning entry HERE.

Ady has some experience shooting at music events including Rock The World Festival, Urban Street Fest and A7X Hail To The King World Tour 2015. His deep interest in music photography led him to join MTV Breaks.

“I could not believe it when I was told I got the Break! I hope to capture some great music moments in pixels and meet many wonderful people while doing what I love. Ultimately, I hope to one day have my work recognized internationally.” – Aizat Ady Ikram bin Abdull Ropha

“Ady’s submission caught our attention with the color and action of a large crowd fully immersed in an ‘unforgettable music moment’. We were also impressed by Ady’s passion for his art and dedication to making his passion a career.” – Kristian Dowling, Celebrity-Entertainment Photographer (Mentor)

Launched globally at last year’s MTV EMA, it is the first time this highly successful property aimed at creating economic opportunity for talented millennials, is being launched with an Asia version in the region.

How to Win: MTV World Stage passes are not for sale and may be won by fans in an online game on http://worldstage.mtvasia.com/win/. Fans simply need to watch a video related to MTV World Stage Malaysia, answer a question and stand a chance to win*. Contest ends on 1 September 2015.

How to Win #2: Check out sponsors and partners’ promotions who will also be giving out show passes through their own promotions and activities.

An MTV World Stage Roadshow will take place on 5 – 6 September 2015, 12pm – 6pm at Sunway Pyramid Shopping Mall (Blue Concourse). This will give fans a chance to meet with MTV VJs Alan and Hanli, who will be giving away the last batch of show passes and limited edition MTV merchandise. A lucky few will even bag the coveted Meet and Greet passes to get up close to the stars!

In the weeks ahead, fans can get direct information by following MTV Asia on Facebook, Twitter and Instagram for news updates on MTV World Stage Malaysia 2015.