One of the most dynamic live performances is coming to town! Top Korean reggae artistes Skull & Haha will be in Malaysia for the first time on Saturday, 21 December 2013, to meet fans up close and personal. In addition to a separate meet & greet session, they will be bringing their fun, unique blend of Korean reggae music and high- energy performance to celebrate the year’s end with fans.

On 30 December 2011, HaHa was honoured the ‘Best Entertainer’ at the 2011 SBS Entertainment Awards for his outstanding performance in ‘Running Man.’ The hit variety programme from Korea has also taken the world by storm, including North America. The programme currently goes on air regionally on ONE TV ASIA, our official TV partner for the showcase in Malaysia and Singapore.

In addition to being a popular presenter, deejay, actor and comedian, HaHa is also a well known singer in Korea. A former member of hip hop group, Zikiri, Haha released his single album ‘You’re My Destiny’ in 2007 and it reached the number 1 spot on the Gaon Chart (Korea’s national music chart).

 A new father and one who enjoys a healthy image that appeals to the mass public, Haha was most recently invited to be the Ambassador for Disney Pixar’s summer animated blockbuster, ‘Monster University.’ He is also a spokesman for the COKE campaign in Korea for two consecutive seasons, including the present.

 Signed in the United States under Morgan Carey, the brother of Mariah Carey, Korean leading reggae artiste Skull reaches out not only to an Asian-American fan base but also Caribbean and American audiences with his distinctive interpretation of the Jamaican patois.

Skull is also a believer in preserving the environment.

The reggae duo released their single, ‘Ragga Muffin,’ in June this year. This is the second  collaboration between Skull & HaHa since the release of their 2012 summer hit ‘Busan Vacance.’

Making a guest appearance for Skull & HaHa is DJ IT who has a wealth of experience working with heavy weights in the Korean music industry, including Big Bang, RAIN, Lee Hyori, YG Family, DJ DOC, Dynamic Duo, amongst many others. 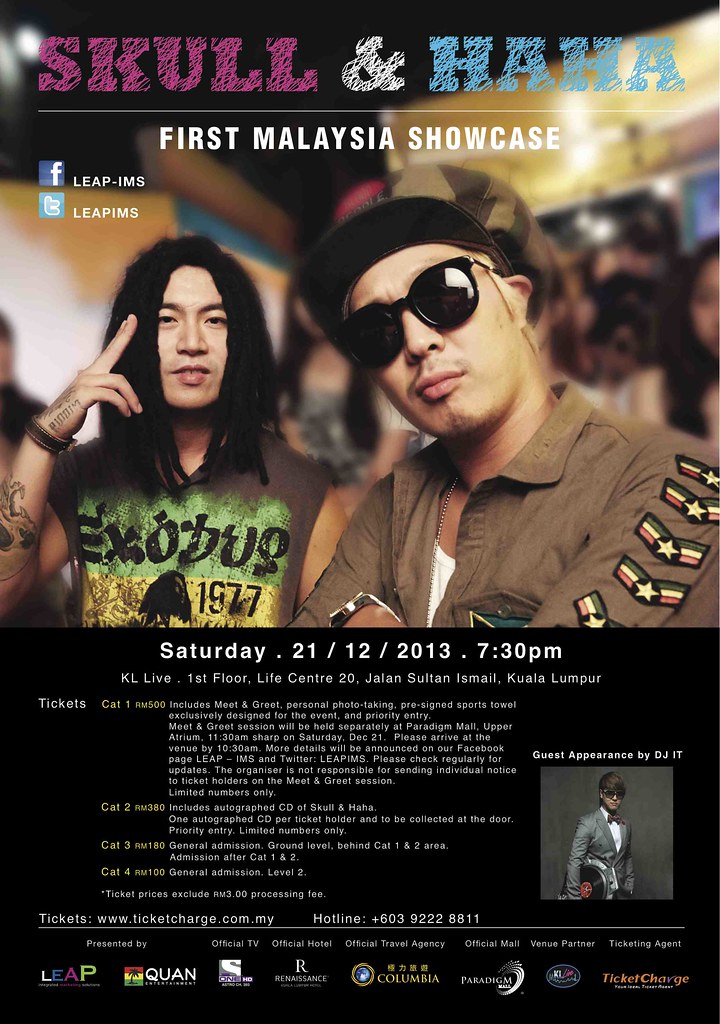 The meet & greet session will be held at Paradigm Mall, Upper Atrium, 11:30am, Saturday, Dec 21. Please be at the venue by 10:30am. Updates will be announced on our Facebook page: LEAP-IMS and Twitter: LEAP IMS.
Please check regularly for updates. Limited numbers only.

: Includes pre-signed CD. One CD per ticket holder. Priority entry. CDs to be picked up at the door. Limited numbers only.

For Media enquiries, please write to us at [email protected]