With the theme of Initiating the Culture of Creative Conservation, a journey around the world to promote the message of panda conservation and sustainable development started 5 years ago in France. With 1600 pandas travelling since 2008 as a collaboration between WWF and French artist Paulo Grangeon where more than 100 exhibitions were held across various countries such as France, The Netherlands, Italy, Germany, Switzerland, Taiwan and Hong Kong.

Malaysia is the 3rd stop for the pandas and the tour starts from 21 December 2014 and ends on 25 January 2015. Paulo Grangeon, an enthusiastic French sculptor with more than 30 years of experience, created the 1,600 papier mache pandas in various poses, emotions and sizes using recycled paper, as a symbolic representation of the amount of pandas left in the wild. 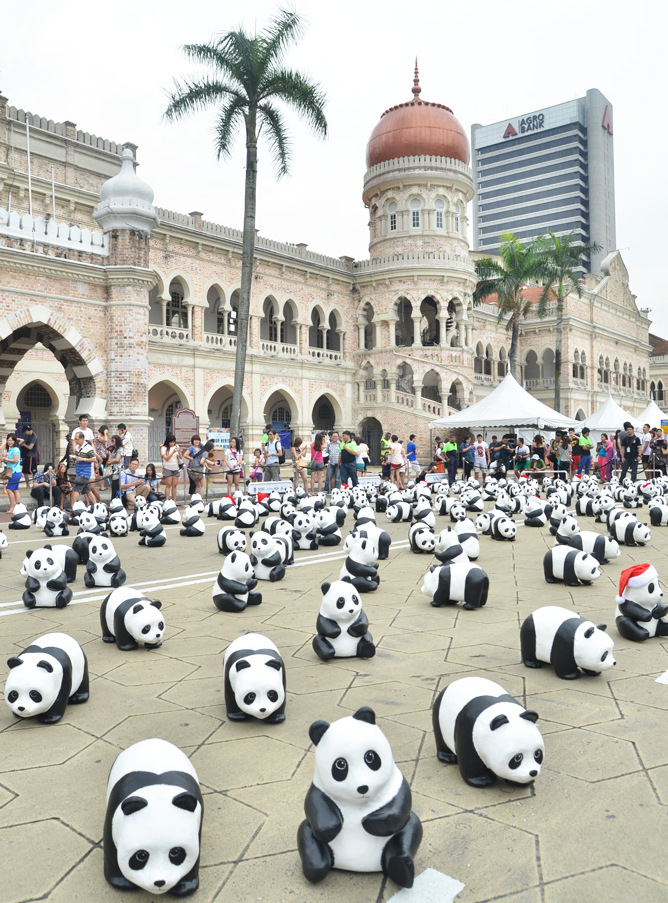 The 1600 Panda Malaysia Tour Launch was held on 21 December 2014 at Dataran Merdeka. Apart from Carrie Lee Sze Kei 李诗琪 (Featured in most photos here in this post), other local celebrities and personalities were present at the launch event too. Want to check out the Pandas in person?

With 15 iconic landmarks for Malaysians to visit, below is the full schedule for The 1600 Pandas Malaysia Tour :

ABOUT WWF-MALAYSIA
WWF-Malaysia (World Wide Fund for Nature-Malaysia) was established in Malaysia in 1972. It currently runs more than 90 projects covering a diverse range of environmental conservation and protection work, from saving endangered species such as tigers and turtles to protect our highland forests, rivers and seas. The national conservation organization also undertakes environmental education and advocacy work to achieve its conservation goals. Its mission is to stop the degradation of the earth’s natural environment and to build a future in which humans live in harmony with nature, by conserving the nation’s biological diversity, ensuring that the use of renewable natural resources is sustainable, and promoting the reduction of pollution and wasteful consumption.

ABOUT PAULO GRANGEON
Paulo Grangeon is an enthusiastic French sculptor who has been active in his craft for more than 30 years. He, his wooden sculptures and stage designs have graced numerous countries in Europe and America, and eventually, around the world; Paulo was later recruited as a wood designer by an international brand, where he worked for almost 20 years. In 1997, Paulo was mesmerized by the Thai craft of papier-mâché and started his own ceramics and papier-mâché workshop in France, “Matiere Premiere”. He then frequented Thailand to further study the art. In 2008, Paulo was invited by the World Wildlife Fund to create the “1600 Panda” world tour. To date, he’s made more than ten thousand papier-mâché pandas in Thailand. Aside from pandas, Paulo is no stranger to other animals: in 2009 alone, he molded 120 papier-mâché whales for the Overseas Ministry of France and 200 papiermâché black bears for Taiwan.