INEXNINE COMMUNICATIONS SDN BHD will be organizing an upcoming J-Pop Concert on the 1st of December 2012 at the KL Live – Concert Hall.

The Concert is in line with the 30th Anniversary of Look East Policy between Japan & Malaysia which is part of a yearlong celebration being held and the concert showcases Japan’s current Top Female All Girl Band – “SCANDAL” in their SCANDAL SPECIAL LIVE IN MALAYSIA 2012 CONCERT.

[dropcap]T[/dropcap]he concert which starts off at 8.00pm will also feature a local opening act and a Cosplay Competition where audience can come dressed in their best “Cosplay Outfits” and stand a chance to win some fantastic prizes during the contest. There will also be participating retails brands and Official SCANDAL merchandises on sale during the concert. 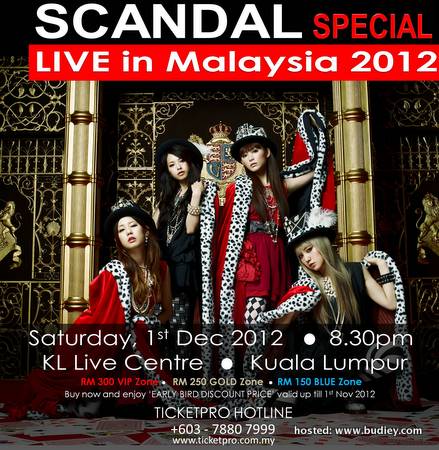 Fans of SCANDAL can also expect Media tie ups and upcoming Promotions to be announced periodically via the concerts official Facebook Events Page at: “SCANDAL SPECIAL – LIVE IN MALAYSIA 2012”

This is first time, the artiste known as SCANDAL will be performing in Malaysia and it will be a great opportunity for all their Fans to catch them performing LIVE here. The Concert will be part of their promotions tour for the Album “Queens are trumps – Kirifuda wa Queen” which will be officially launched in Malaysia by SONY Music Malaysia on the 1st week of November 2012.

SCANDAL was formed in August, 2006 with four high school girls who went to the same vocal & dance school in Osaka, Japan. They started performing as SCANDAL with aggressive sounds with pop characters. After it was formed, they often performed on the street of they called Shiroten in Osaka Castle Park. After a while, they started performing at the live house in Kansan area.In March 2008, they were invited to Japanese culture convention Sakura-Con in Seattle, and they went around six cities in the U.S to see over 7,000 fans of them.

In July 2008, they generated 10,000 people to Japan Expo in France and 8,000 to Anime Comic Fes in Hong Kong in August. In October 2008, they released “DOLL” as their debut single. “DOLL” was rewarded for Power Play from over 40 FM/AM/CS radio stations in Japan. In June 2009, they released their 3rd single “Shoujo S”, and it was ranked 6th in the first week on Oricon chart, and 5th on Reco-choku Chakuuta Full (Full digital download provider) weekly chart. On October 21st, they released their first album “BEST SCANDAL” and ranked 5th on Oricon chart in their first week of the release. 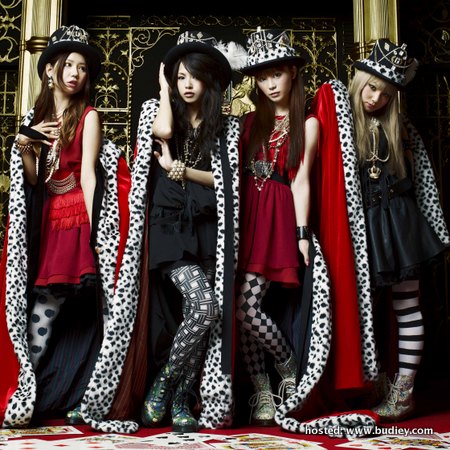 For the girls band’s album to be awarded within 5th in their first week of the release was the first time in 7 years and a half. In 2009, they were rewarded for New Face Award from Japan Record Award. – New Artist Their 7th single “Shunkan Sentimental” a tie-in song with the smash-hit animation series “FULLMETAL ALCHEMIST”, has again scored high on the charts. #7 on ORICON and #4 on the Reco-choku full (full track download) chart. They released their 2nd album “TEMPTATION BOX” in August 2010, and this was awarded 3rd place on Oricon daily chart. In October, “Scandal nanka Buttobase” was released, and awarded 3rd place on Oricon weekly chart, the highest ranking on Oricon weekly in their history ever. In April 2011, single “HARUKA”was released and it also ranked #3.

In August 2011, their 3rd original album “BABY ACTION” was released, followed by “VIDEO ACTION”, 1st video clip collection DVD. They also went on Asia tour, first tour outside Japan, and gathered 2,500 audiences from Taiwan, Hong Kong, and Singapore. In March 28 2012, SCANDAL held the concert in Nippon Budokan, one of the high status venues in Japan.

For more details on the band, please visit their Official websites at: