Four varsities emerged as finalists to showcase their most innovative Applications based on bada – Samsung’s new, open smartphone platform – in the finale of the bada Developer Varsity Challenge 2010.

The challenge supported by the Multimedia Development Corporation (MDeC) and Malaysian Communications and Multimedia Commission (MCMC), saw students using their creativity and ingenuity, to develop bada applications for social networking, location-based service (LBS), education and even for religious activities. 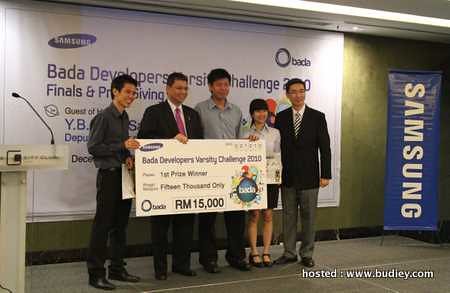 “Samsung is actively constructing a total eco-system around the bada platform including Samsung Applications, making our platform vision a reality for consumers, developers and operators to experience the freedom of choice that bada enables,” added Mr. Yu.

Samsung’s vision for the Smartphone era is defined by a revolution both in hardware and software, operator-friendly practices and open development. The result is bada, Samsung’s open smartphone platform that will define our success worldwide.

“MDeC is committed to the continued development of the ICT industry in reaching the nation’s goal as a developed country in 2020. With that in mind, we support the initiative by Samsung in delivering cutting-edge technologies to Malaysia’s ICT industry and the public,” said En. Saifol Bahri Shamlan, Vice President, MDeC.