Samsung Electronics Co. Ltd, a global leader in consumer electronics, and the Worldwide Olympic Partner for Wireless Communications Equipment, announced today its search for approximately 100 Samsung Global Bloggers to share their London 2012 Olympic Games experience across the world. Samsung Global Blogger (SGB) is one of Samsung’s signature marketing programmes for its Olympic sponsorship providing the opportunity for young people around the world to travel to London for the Olympic Games and share their personal experiences on a specially created blog. 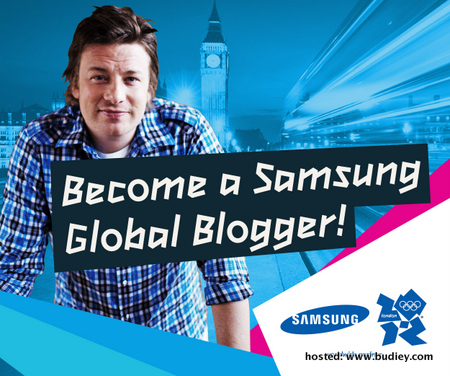 SGB will play a key role in helping everyone share in the magic of the Olympic Games. Samsung launched a digital platform which will become the battleground for SGB hopefuls put to the test as part of a live two-round audition process that will judge ability to seek out exciting stories happening in London and generate buzz about the London 2012 Olympic Games. The audition calls for the submission of a 30 second video stating why the entrant should be picked to come to London. The video will be judged on the entrant’s creativity and enthusiasm. Those who get through to the second round will be putting together a video report, before the final lucky winners are selected by a celebrity judging panel to come on a once-in-a-lifetime trip to London.

Video applications can be submitted online via global digital platform MSN at www.samsungglobalblogger.com through to April 22nd.

The chosen SGBs will get first-hand experience of the Olympic Games, sharing their personal experiences through www.samsungglobalblogger.com, www.samsung.com and via their own personal social media networks. Additionally SGBs get the opportunity to experience the different cultures and influences that provide the very ‘taste of London’ alongside many of the Olympic venues. Samsung will welcome young explorers from across the world to come to London to uncover the best the city has to offer.

Regular online shows hosted by a well-known presenter yet to be announced, will be broadcast on www.samsungglobalblogger.com during the Olympic Games. The digital show will feature the SGB journey, providing compelling content, entertainment and relevance to its global audience.

Games time is when the SGBs have the opportunity to show-off their content creation skills to a global audience of friends, families and Olympic Games fans. They will upload blogs, videos and images throughout the Games on www.samsungglobalblogger.com. The SGBs will capture the highlights of their London 2012 experience through their own unique perspectives.

Sunny Hwang, Vice President & Head of Global Sports Marketing at Samsung Electronics, said “Since its inaugural launch at the Nagano 1998 Olympic Games, SGB has developed into a truly global program, encouraging participation from more countries than ever before, and expanding its reach through an integrated global digital platform. By creating a strong connection with our target consumers through global campaigns and web-based platforms, we come closer to achieving our goal of making London 2012 ‘Everyone’s Olympic Games’. This year’s SGB programme will be our biggest activation to date and one which really cements London 2012 as the first truly digital Games.”

The initiative is supported by celebrity chef Jamie Oliver who was announced as a Samsung Ambassador for the London 2012 Olympic Games earlier this month. Jamie will support the SGB programme to encourage more people to take part and share in the excitement of London 2012. Commenting on the programme, Jamie said, “Samsung has developed some incredible initiatives to get young people from around the world involved in the Games and the Samsung Global Blogger programme is a fantastic example of this.”

About Samsung’s Involvement in the Olympic Games
Samsung began its Olympic Games involvement as a local sponsor of the Seoul 1988 Olympic Games. Beginning with the Nagano 1998 Olympic Winter Games, the company extended its commitment to the Olympic Movement as the Worldwide Olympic Partner in the Wireless Communications Equipment category, providing its proprietary wireless communications program, called Wireless Olympic Works (WOW), and mobile phones. These innovative mobile phone technologies provide the Olympic Family with real-time information and communications services. Samsung is also a Presenting Partner of the Olympic Torch Relay and hosts various digital marketing campaigns to share the excitement of the Olympic Games with people around the world and enable everyone to participate in the Games through its smart mobile technology. Samsung’s commitment as a Worldwide Olympic Partner continues through to Rio 2016.

About Samsung Global Blogger (SGB)
The Samsung Global Blogger (SGB) programme will spread the excitement of the Games around the world. Young and inspiring individuals from all over the world will be selected as Samsung Global Bloggers all of whom will be given the opportunity to seek out the best of London and share their personal experiences of the London 2012 Olympic Games using their content creation skills and social media networks. Each SGB will be equipped with the latest Samsung smartphone technology allowing them to capture their unique experiences and sharing their extraordinary Olympic Games stories with people across the world.