[dropcap]K[/dropcap]onsert Mega Bintang (All-Stars Concert) scores many first. It is the first concert bringing together 8 of the top Indonesian artistes/bands performing on a single concert stage. It is the first such concert to be held at the Resorts World Convention CentreTM, Compass Ballroom, the region’s largest column-free ballroom.

It is the first concert that partners an established local concert promoter with one of the biggest talent management companies in Jakarta. It is also the first concert here to be creatively directed by Jakarta-based leading broadcaster SCTV. Rightfully so that this concert, the biggest undertaken by Raistar Entertainment to-date, is dubbed the Concert-of-the-Year 2013.

The concert is also commemorating Trinity Optima Productions 10 years anniversary and marks their first celebration outside Indonesia. The 8 artistes/bands line-up comprised of their crème de la crème superstars, namely Rossa, UNGU, Afgan, D’Bagindas, Vidi Aldiano, Sherina Munaf, Maudy Ayunda and Gamma1. The all-stars will be performing as many as 30 hit songs to an expected audience of 4,000 fans.

[pullquote]Two of the main artistes – Rossa and Ungu had performed recently in Singapore to a full capacity audience at the Esplanade Concert Hall.[/pullquote]

Konsert Mega Bintang is a 3-in-1 event comprising of pre-concert dinner-with-the- stars on 7 June at the Mamanda Restaurant, the 2.5 hours concert that starts at 8pm on 8 June at the Compass Ballroom and an exclusive by-invitation only post-concert reception immediately after the concert. The concert will be fully recorded by SCTV for broadcast as a special variety programme.

According to Mr Fahmi Rais, CEO of Raistar Media Pte Ltd, “This is our biggest concert not just by the sheer star power, but creatively, operationally and logistically as well. We will not be able to pull this off without the strategic partnership and collaboration with Trinity Optima and Resorts World Sentosa®. In all, it makes this concert, one entertainment event that no concert lovers should miss.”

More than half of the VIP tickets have been sold since word is out that the year’s biggest concert will take place. Regular tickets of $68, $88, $118 and $158 will go on sale from 3rd week of April 2013 via Sistic. The Resorts World Convention CentreTM, Compass Ballroom, has played host to international heavyweight stars such as Julio Iglesias, Tears For Fears, Aaron Kwok and Leon Lai. Konsert Mega Bintang is the venue’s first hosting of an Indonesian concert.

Budiey Dot Com as Official Blogger for this concert. 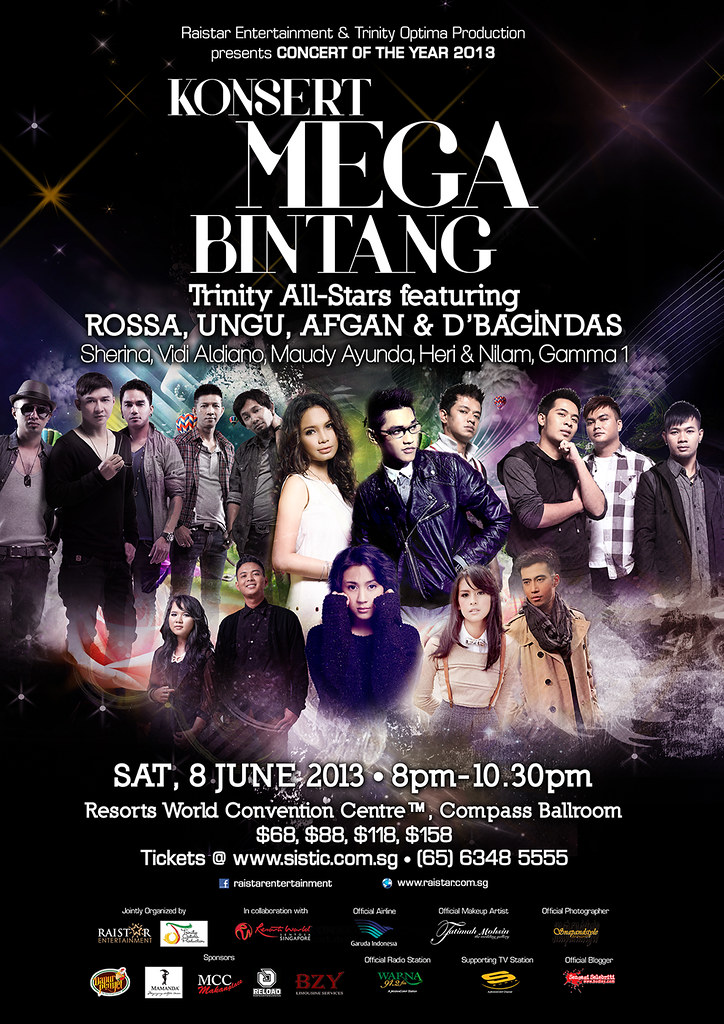 About Raistar Entertainment
Established in 1997, the Raistar brand is now the oldest and best known concert promoter and producer for the Malay community in Singapore. Some of its notable successes and sold out concerts include Cinta Harmoni Rossa (2011), Alleycats: Istimewa Buat Singapura (2012) and UNGU: Yang Terbaik Untuk Mu (2013). Raistar is helmed by veteran broadcaster Fahmi Rais and former Selebriti magazine editor, Sulaimah Abdul Kadir. For more information, please visit www.raistar.com.sg or www.facebook.com/raistarentertainment.

About Trinity Optima Production
Trinity Optima Production, founded in 1972, is one of Indonesia’s leading entertainment company, focusing on music production and establishing itself as one of Indonesia’s biggest music labels. Trinity currently has ten artists under its management such as Ungu, Rossa, Afgan, Sherina, Vidi Aldiano, Maudy Ayunda, Setia Band, D’Bagindas, Gamma1, & Naff Band. Trinity Optima Production has achieved record breaking album sales, achieving Multi Platinum sales for artistes such as Ungu, Sherina and Rossa. Trinity Optima Production also scored sold out concerts in Bukit Jalil International Stadium in Malaysia, and the Esplanade Theatre in Singapore for artists like Rossa and Ungu. On the recording front, Trinity Optima Production achievements include winning several awards for its artistes, such as 5 Anugerah Muzik Awards by Rossa, and numerous AMI Awards (Indonesia’s Highest Music Awards) for its other managed artistes such as Ungu, Sherina, Afgan, and Vidi.
  
About Resorts World Sentosa
Resorts World Sentosa (RWS), Singapore’s first integrated resort is located on the resort island of Sentosa. Spanning 49 hectares, the resort opened in January 2010 and welcomed over 30 million visitors in its first two years of opening. RWS is home to the region’s first-and-only Universal Studios theme park, the world’s largest oceanarium – Marine Life Park, the Maritime Experiential Museum, a casino, luxurious accommodation in six unique hotels, the Resorts World Convention Centre, celebrity chef restaurants, a world-class spa as well as specialty retail outlets. The resort also offers entertainment and public attractions such as the Crane Dance and the Lake of Dreams. Resorts World Sentosa is wholly owned by Genting Singapore, a company of the Genting Group. For more information, please visit www.rwsentosa.com. 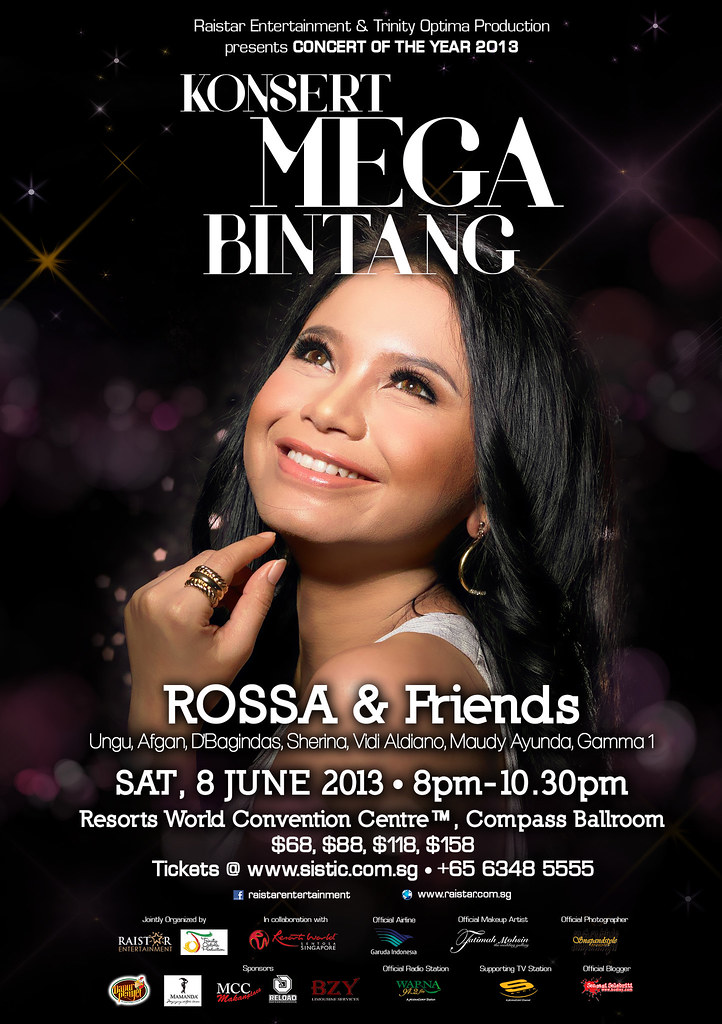