Fueled By Ramen recording group Paramore has announced the eagerly awaited release of their fifth studio album. “AFTER LAUGHTER” will arrive everywhere on Friday, May 12th. The GRAMMY Award-winning band’s first new album in more than four years, “AFTER LAUGHTER,” is available for pre-order beginning today and accompanied by an instant grat download of the just unveiled new single, “Hard Times.” “Hard Times” is joined by a dynamic new companion video. The clip, directed by Andrew Joffe, premieres today exclusively on Fueled By Ramen’s official YouTube channel.

“AFTER LAUGHTER” was recorded at Nashville’s historic RCA Studio B – Paramore’s first time recording in their own beloved hometown. The album is produced by Justin Meldal-Johnsen and Paramore’s own Taylor York. “AFTER LAUGHTER” also marks the return of original member Zac Farro back to the band. 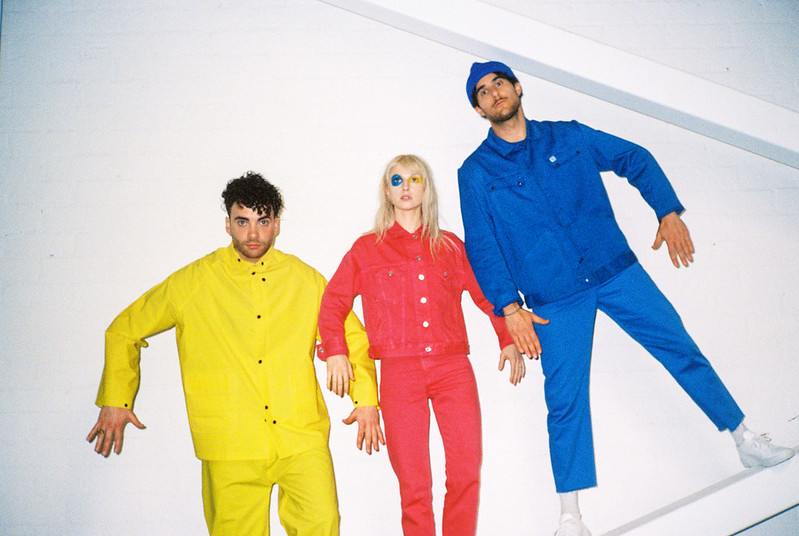 Paramore will kick off a European headline tour this June. For tour dates and more news, please visit paramore.net.

PARAMORE RETURN WITH “AFTER LAUGHTER”

COMPANION VIDEO FOR “HARD TIMES” OUT NOW (CHECK IT OUT HERE)

Paramore – 4x GRAMMY nominees and winner of the “Best Rock Song” trophy at the 57th Annual GRAMMY Awards – have long established themselves as international rock superstars. Their previous self-titled album “PARAMORE” made a chart topping debut atop the SoundScan/Billboard 200 upon its April 2013 release marking Paramore’s first #1 album to date – and also scoring an array of #1 debuts around the globe. “PARAMORE” showcased a string of blockbuster singles including two 2x RIAA platinum-certified hits, the top 10 “Still Into You” and the #1 smash, “Ain’t It Fun.” The latter track proved Paramore’s biggest single to date, ascending to #1 at Hot AC and Rock radio outlets nationwide, #2 at Top 40, as well as to the top 10 on Billboard’s “Hot 100” – the band’s first ever top 10 hit on the overall chart and their highest peaking song thus far.

Paramore has had a truly remarkable run of RIAA certified albums and singles since coming together in Nashville in 2004, from 2005’s gold-certified debut, “ALL WE KNOW IS FALLING” and 2007’s 2x platinum-certified breakthrough, “RIOT!” (with its 3x platinum-certified hit, “Misery Business,” as well as the platinum-certified singles “crushcrushcrush” and “That’s What You Get”) to 2008’s worldwide platinum “Decode” (from Chop Shop/Atlantic’s chart-topping “TWILIGHT – ORIGINAL MOTION PICTURE SOUNDTRACK”) and 2009’s platinum-certified “brand new eyes” and its GRAMMY®-nominated smash, “The Only Exception.”

Long regarded as an exhilarating live act, Paramore has spent much of the past decade-plus on the road, with highlights including sold out headline arena tours and show-stealing festival sets around the globe. Paramore has consistently drawn both critical acclaim as well as a wide ranging list of international honors and accolades, now including a GRAMMY® Award, two People’s Choice Awards, three NME Awards, three MTV Video Music Award nominations, and much much more.