The two winners, Shashalaily Mohd Noordin and Wan Kum Peng from Petaling Jaya, were overjoyed because they not only won the RM50,000 gold coin but also had the opportunity to meet Malaysia’s Olympic hero, Pandelela Rinong. 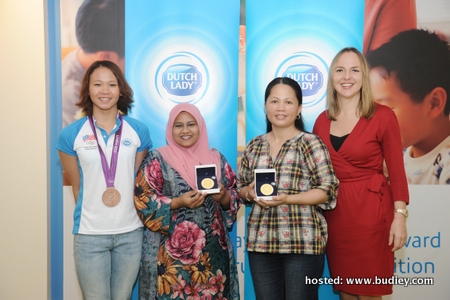 “I have always admired Pandelela, and receiving the gold coin from her is a dream come true for me,” said Shashalaily ecstatically, a 33 years old clerk.

Wan Kum Peng, a 42 years old graphic artist, who is also a diehard fan of Team Malaysia and followed the entire Olympic Games, plans to present the gold coin to her husband as a retirement gift.

“Today is a poignant day for me because it is not very often I get the chance to personally meet my fans especially supporters of Team Malaysia. I really appreciate the support because it inspired me to make Malaysia proud,” said Pandelela during the prize giving ceremony.

According to Anja Henze, it was only apt that Pandelela presented the gold coins to the winners as she was part of Dutch Lady Malaysia’s ‘Drink More, Do More – 2aDay’ campaign which kicked off early this year. The campaign was to encourage Malaysians to have two servings of milk a day.

A total number of 222 lucky winners, with the number ‘2’ signifying the ‘2aDay’ campaign, walked away with gold coins and cash worth up to RM300,000.

“The ‘Go Malaysia, Go!’ contest, which ran from 15 June to 15 August, was part of our endeavour to evoke the nation’s passion to support our athletes who represented Malaysia in the Olympic Games; namely Pandelela Rinong, Azizul Awang, and badminton men’s doubles pair, Koo Kien Keat and Tan Boon Heong,” said Anja.

“We hope that with the ‘2aDay’ campaign we have enhanced the spirit of sport among our fellow Malaysians and increase awareness of the importance of getting the right amount of nutrition to achieve success as our athletes have done,” she added.