From the screenwriter of Cars and Tangled comes another extraordinary and brilliant story fit for the entire family.

In this modern day and age, it is not surprising if we have never spoken to our neighbours, let alone knowing who they are and where they come from. As absurd as it may sound, one cannot rule out the possibility that we may even be living with aliens. This has turned into an idea for famous director, producer and screenwriter, Dan Fogelman – the creative mind behind shows like Cars, Tangled, and Crazy, Stupid Love – to create a high-concept sitcom, “The Neighbors”, that became an instant hit.

[pullquote align=”right”]The 22-episode drama which received an Emmy nomination last year, will make its debut on the Home of Feel Good, ntv7 (Channel 107) on 26th January, every Sunday at 9.30pm. With an imaginative mind like Fogelman, viewers can be sure that The Neighbors will measure up to popular sci-fi sitcom “3rd Rock From The Sun”.[/pullquote]

Starring Jami Gertz, Lenny Venito, Simon Templeman, Toks Olagundoye, Clara Mamet, Tim Jo, Ian Patrick, Max Charles, and Isabella Cramp, The Neighbors is said to have one of the strongest child cast in any of the family sitcoms ever produced – which is one of the reasons the show has been successful.

The ABC production tells the story of Marty Weaver (Lenny Venito) who recently bought a home in Hidden Hills, a gated New Jersey townhome community with its own golf course, in hopes of providing a better life for his wife, Debbie (Jami Gertz) and three kids Amber, Max and Abby (Clara Mamet, Max Charles, Isabella Cramp). The houses in Hidden Hills are so exclusive that a unit hasn’t come on the market in 10 years. Lucky for the Weavers (or are they?), the family managed to be an owner of one.

As the Weavers shift in to their new home in Hidden Hills, they were greeted by their neighbours in a rather peculiar way. They soon find out that the entire neighbourhood is comprised of aliens from another planet known as “Zabvron”, where the men (not women) bear children, everyone cries green goo from their ears and receives nourishment through their eyes by reading books!

The Zabvronians have been stuck on Earth for 10 years in the Hidden Hills neighbourhood, while waiting for instructions to return “home”. Since their time on earth has been prolonged, these green-looking aliens have disguised as humans. They can also revert to their original appearances by clapping their hands above their heads.

Unable to sell off their new home at a short period of time, the Weavers will have to learn to live with their strange neighbours with antics that would leave them screaming for help! Like the Weavers, this group of aliens who are led by leader, Larry Bird (Simon Templeman) and his wife Jackie Joyner-Kersee (Toks Olagundoye), will also find earthlings to be exceptionally unbearable to live with as the Weavers are the first humans they have ever met. That aside, both humans and aliens will discover they can totally relate and learn from each other as the show progress.

Be sure to catch this weekly half an hour family sci-fi sitcom – The Neighbors – every Sunday, 9.30pm on ntv7 (Channel 107) – starting 26th January! 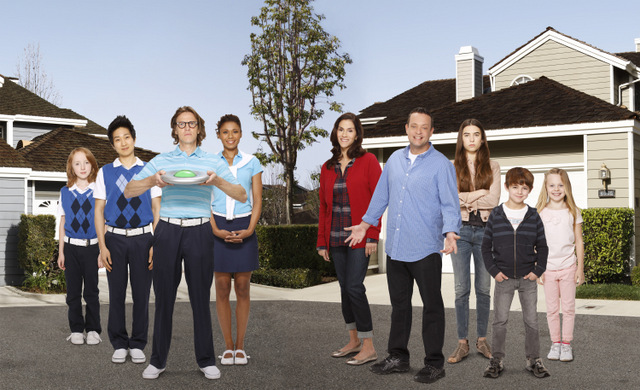 For more information on the show, log on to www.ntv7.com.my or follow us on our social media platforms:

Zabvronians are bipedal and amphibious. They are green invertebrates that secrete a sort of green mucus. Their vomit melts objects. Men carry children, so it can be assumed they have at least some female organs. They sleep in chrysalis-like pods suspended over a miniature garden. Every time their leader feels pain or encounters rejection, the whole community feels it with him. Their sense of sight isn’t as acute as their sense of smell, therefore they differentiate the humans they cohabitate with by scent.

Children
Unlike humans, Zabvronian children cherish their relationship with their parents, particularly in an annual festival of compliments which features a hugging ceremony. Children Zabvronians also have the ability to change what they look like as a human.

Wedding
When the moment is right, two Zabvronians are pulled to their feet by a magnet force and pulled to a holy place where they are wed. It is a complex ritual in which two Zabvronians make a mental connection.

Unlike humans who usually wage war by using physical violence the Zabvronians prefer to wage war through psychological destruction. The working method of this kind of warfare is to mentally crush the the Zabvronians enemy until they are effectively no longer able to function in society.

Others
Zabvronians seem to be fond of alpacas (a domesticated species of South American camelid, which resembles a small llama in appearance) and enjoy gardening. It is important to pay tribute to one’s father by emitting a high-pitched yelp.

The matriarch of the Weaver family, Debbie strives to be the world’s greatest mother and will do what it takes to make her kids happy. She’s happily married to Marty, who is a constant source of calm when she needs it.

Jami Gertz has crafted a distinguished reputation in film, television and theater. Most recently Gertz appeared on ABC’s Emmy Award-winning comedy Modern Family and hit series Entourage. In 2002 Gertz received an Emmy nomination for her role on the critically acclaimed television series Ally McBeal, where she guest starred in a four-episode arc.

Marty Weaver is the patriarch of the family, though he still has to check in with his wife on every major decision. In fact, the only decision he’s ever made in their marriage by himself was buying a new house that turned out to be in a suburb full of aliens. Marty is a family man who works as the head of Inventory at Rock ‘N’ Stroll to provide important things for his family, like food, shelter, and very elaborate birthday parties.

Lenny Venito is a native New Yorker who studied acting at the prestigious LaGuardia High School of the Performing Arts. His television credits include recurring roles on The Sopranos, Rescue Me, Curb Your Enthusiasm, Flight of the Conchords, Bored to Death, and ABC’s NYPD Blue. His film credits include Men In Black III, How Do You Know, and War of the Worlds.

Larry Bird is the supreme leader of the Zabvronian community on Earth. He and his wife Jackie Joyner-Kersee have two children, and live in the Hidden Hills gated community in New Jersey. Although Larry Bird stubbornly resists adapting to Earth’s strange customs, he’s slowly warming up to the idea with the help of his progressive wife and kids.

Simon Templeman started his career in the theater in England. A long-time member of the Royal Shakespeare Company, he played many roles, including Romeo in Romeo and Juliet. He came to America twice with the company, in All’s Well That Ends Well and Nicholas Nickleby, both on Broadway. Other notable theater credits include performing at the National Theatre in David Hare’s A Secret Rapture.

Jackie Joyner-Kersee is married to her community’s Leader, which makes her the Zabvronian equivalent to a first lady. Although Jackie is also baffled by Earth’s many strange customs, she’s much more open-minded than her husband. Having been an athlete on her home planet, she also possesses a competitive spirit, that serves as an anchor for not only her husband, but the alien community at large.

Toks (pronounced “tokes”) Olagundoye is a newcomer to the Los Angeles entertainment world, and in her short time here has added several credits to those she had already achieved in film, television and theatre in New York. In recent years, Olagundoye has guest-starred on NCIS, Prime Suspect and Switched at Birth. Other film and television appearances include CSI: NY, Law & Order, Ugly Betty, Brown Sugar and The Salon among others.

Amber Weaver, the oldest of the Weaver children, is a surly teenager who terrifies her parents and all of the aliens in the neighbourhood. Well, except for Reggie Jackson who finds her scary personality and obsession with Mark Ruffalo endearing. Having spent years climbing the social ladder and finally becoming popular at her old high school, Amber now has to start all over again at a new school.

Only a teenager, Clara Mamet – the 18-year-old daughter of playwright and director David Mamet – is a dynamic actress and writer in her own right. Most recently she wrote and starred in her silver screen directorial debut, Two-Bit Waltz. In addition to appearing in The Neighbors, Mamet also appeared in the Barry Levinson HBO biopic about Phil Spector which starred Al Pacino.

Reggie Jackson is Larry and Jackie’s oldest son. A teenager, Reggie Jackson attends high school with Amber Weaver, who has quickly become the object of his desire. Much like human adolescents his age, Reggie is easily embarrassed by his parents, particularly his father.

Tim Jo, a native Texan, made his acting debut in the film Bandslam, followed by guest appearances on the television series Greek and Castle. He was also a series regular on Glory Daze.

Dick Butkus is Larry and Jackie’s youngest son. He’s precocious, well-mannered and in awe of this strange new world. Dick loves to express himself, whether it’s in the form of a love salute for his parents or defending his human friends in the face of danger.

With a passion for acting coming at an early age, Ian Patrick first started his career with commercial and print modeling. After finding his love for the camera he moved to acting, landing small parts in a variety of film and television projects. In 2012 Patrick made his big screen debut as Grisham in Judd Apatow’s eccentric comedy, Wanderlust, opposite Jennifer Aniston and Paul Rudd.

As the middle child, Max is starting to experience all the joys of adolescence, like dealing with girls suddenly wanting to be his girlfriend and trying to establish his position as one of the cool kids at school. But with Dick Butkus as his closest new friend, the task of being cool in school just got way more complicated.

Max Charles is a young actor with an impressive resume at just eight years of age. He most recently reprised his role as young Peter Parker in The Amazing Spider-Man 2, opposite Emma Stone and Andrew Garfield. Charles also has a knack for TV acting, as well as voice-over work. Most recently Charles played Peezer in the feature film The Three Stooges, with Jane Lynch, Sean Hayes and Jennifer Hudson.

The youngest of the three children, Abby makes her presence known by often screaming at the top of her lungs. As far as the aliens are concerned, Abby thinks that “they’re silly” but she “likes them.”

In a very short period of time since signing to one of Hollywood’s top children agencies, Isabella Cramp has garnered an impressive list of credits which include Happy Endings, In Plain Sight, Mike and Molly and CSI: Miami, Enlightened, It’s Always Sunny in Philadelphia, the Lifetime original movie Piper Rose, as well as numerous commercials. 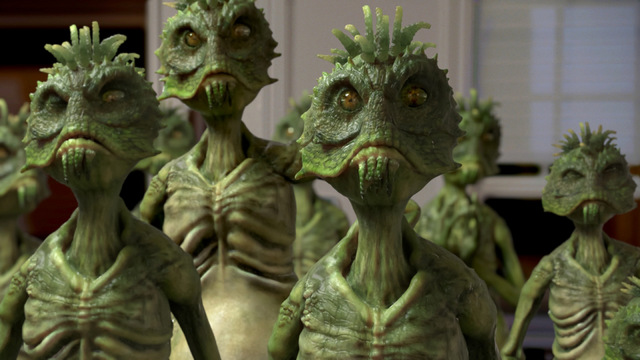 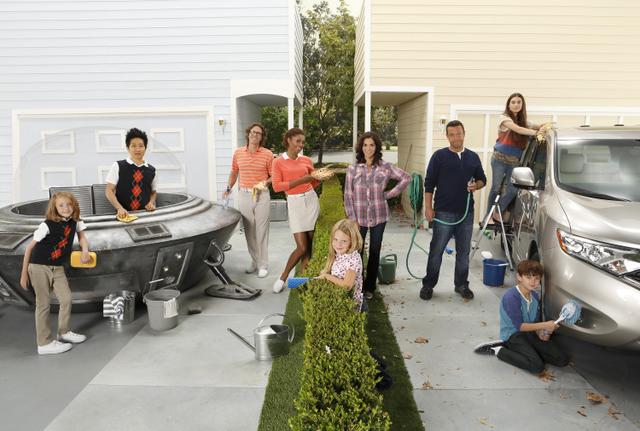