As the concert organizer for ‘Konsert Penghargaan Search di Awan Biru’, with the successful execution of both Seberang Jaya & Johor Bahru venues and sales of over 15,000 tickets, Art-Is At Work will not be stopping for rest until 9 remaining venues have been covered. With Celcom (Malaysia) Berhad as the official sponsor, the nationwide tour is still underway. 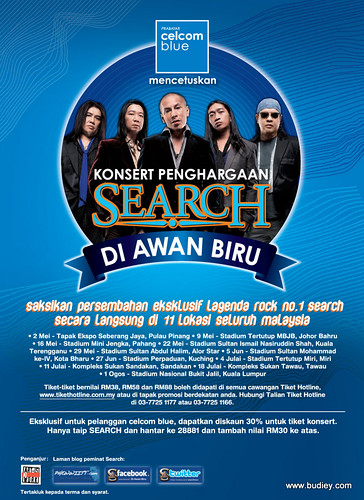 Due to the overwhelming response, tour organizer Radin Shamsulkamar has confirmed a value-added promotion package for ticket buyers outside Klang Valley venue. The offer provides 20% discount per Bukit Jalil ticket purchased for every ticket bought for any other venue.

This promotion, along with the Search Entourage package, starts today and applies also to those who purchased tickets for Seberang Jaya & Johor Bahru venues. Concert viewers will simply need to present their ticket stubs at the purchasing counters to enjoy this limited discount.

This package is valued at RM449 per person & RM799 for a twin package and will be limited to Kuala Terengganu, Kota Bharu & Kuala Lumpur venues only.
For detailed list of concert venues see below :

As for Celcom customers, they can redeem their tickets at Celcom branches, selected shopping centres and the concert venue.