Chicago Live in Malaysia 2016 is Joint Organizer by Mega Ultimate and Marhaen Productions will be held at Mega Star Arena on 18th January 2016 (Monday), 8.30pm. 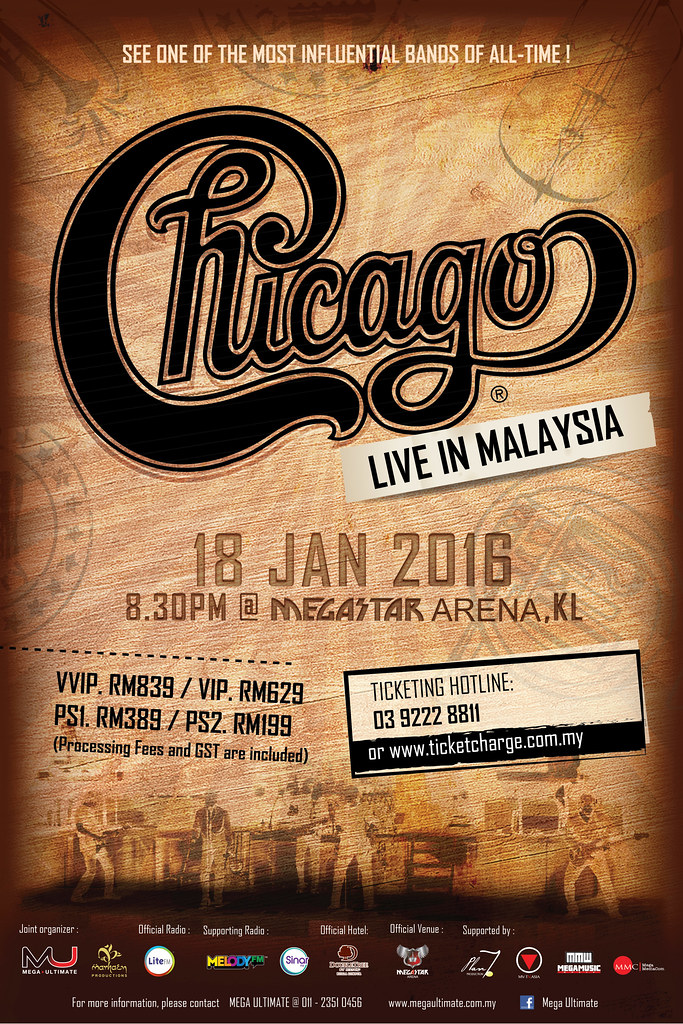 Second only to The Beach Boys in Billboard singles and albums chart success among American bands, Chicago is one of the longest-running and most successful rock groups in history, as well as one of the most commercially successful – with 50 hit songs in the U.S. alone, 18 gold records, a Grammy, and a star on the Hollywood Walk of Fame – Chicago have maintained the unflagging devotion of millions of devoted fans throughout their 37-year career.

Begun with the goal of incorporating the diverse musical range of their hometown Chicago, and incorporating the big-band aesthetic that included horns which had been virtually left behind in the world of rock and roll, Chicago went on to create a sound that remains unparalleled in rock music.

Chicago’s album, Chicago Transit Authority, was inducted into the Grammy Hall Of Fame in 2014, and that year, the band performed on the Grammy stage for the first time. Lifetime achievements include a Grammy Award, multiple American Music Awards, a star on the Hollywood Walk of Fame, a Chicago street dedicated in their honor, and keys to and proclamations from an impressive list of US cities.

Chicago record sales top the 100,000,000 mark, and include 21 Top 10 singles, 5 consecutive Number One albums, 11 Number One singles and 5 Gold singles. An incredible 25 of their 36 albums have been certified platinum, and the band has a total of 47 gold and platinum awards.

The band is now in their 48th consecutive year of touring, without missing a single concert date! Some of Chicago’s hits : Make Me Smile, Hard to Say I’m Sorry, You’re the Inspirations, I Don’t Wanna Live Without Your Love, If You Leave Me Now, and more.

The band will be playing for the 2nd time in Malaysia on Monday, 18th of January, 8:30pm at the Mega Star Arena, one night only concert experience. It is going to be a nostalgic night full of some of Chicago’s greatest hits.

Tickets go on sale this 4th of December, Friday, please log on to www.ticketcharge.com.my or visit ticketcharge outlets to purchase tickets.