The sun shone brightly on the Batu Kawan race tracks today, signaling a hot day of racing both in temperatures and in racing quality.

After a damp opening day on Saturday, Sunday’s races were run in contrasting warm weather, allowing the three classes of racing drivers to push their Toyota Vios to the absolute limits. 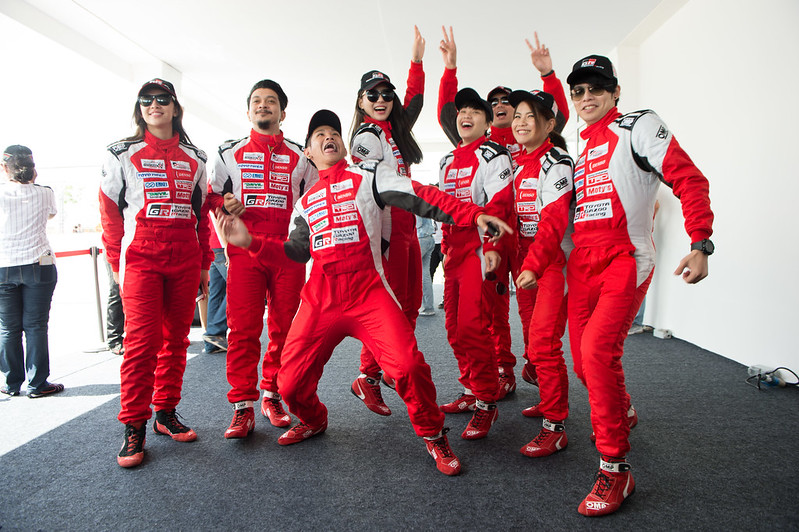 Following the ceremonial opening ceremony at noon where throngs of spectators were allowed onto the starting grid to get up close with all the Vios Challenge race cars and drivers, the 13 top-tier racing drivers from the Super Sporting Category took to the starting grid led by pole sitter Tengku Djan of Team Maxx N Go with Dream Chaser’s Mark Darwin beside him.

As this was their first session on a dry track, the drivers were expected to be tentative but being seasoned racers, it was full throttle from the lights.

Tengku Djan was quickly away with Darwin in tow while Shafiq Ali had his hands full with William Ho breathing down his neck. Early favourite James Verappen who was running in a race in 7th with Boy Wong, clipped a wall and retired with a broken rim.

Boy then found himself locked in a keen battle with Mitchell Cheah while lower down, it was Dato Mohd Nasri who had a battle with Akina Teo and Vincent Ng having a great scrap for 9th position.

Tengku eventually won the 18-lap race with a gap of over 15 seconds from Darwin and Syafiq although the results currently remain provisional due to a technical investigation.

Race 2 of the Promotional Category once again saw beatboxer Shawn Lee make his lightning start from pole and pull away from the field with Shukri Yahaya and Danny Koo in tow.

Fattah Amin who did not finish Race 1 made a great start and was running in mid field for much of the race together with TRD Asia’s Masaaki Murata but he soon caught Diana Danielle who was in 4th. He made a brave attempt to pass on the inside of 3 but the move did not materialize. He clipped the rear of Diana’s car in mid corner and the resultant move sent both their cars into the barriers and into retirement.

Shawn went on to win his second race of the weekend with Shukri Yahaya and Danny Koo completing the podium positions.

“This was my first experience driving on a purposed built race track. I’m happy with the fact that I was a leader in the category. My strategy going into this race was to ensure that I don’t make mistakes and to apply everything I learnt during racing school,” said Shawn Lee.

Racing fans were not disappointed when they stayed for Race 2 for the Sporting Category. The race turned out to be one of the most thrilling of the weekend with close battles throughout the field. In fact, the drivers were so closely matched that 15 drivers were lapping within 1 second of each other.

The constant jostling for positions kept fans on the edge as the top three drivers led by Race 1 winner Ken Foo, Patrick Tam and Brendon Lim could be seen exchanging paintwork on numerous occasions.

Patrick made numerous attempts to pass Foo but his efforts were regularly thwarted due to the matching performance of all the cars. With the final lap board appearing on Lap 17, Patrick made a do-or-die attempt on the outside going into Turn 1. Being on the dirtier line, he slid wide into the barricades and retired. Shanmuganathan whose view of the incident was shielded by other cars, ran into Patrick’s car and duly retired.

Kenneth Koh took his first podium with Brendon crossing the line in third less than a second behind.

With the crowds pumped up following the Sporting Category race, there were great expectations for the final race of the weekend, Race 2 of the Super Sporting Category. What would Tengku Djan do from his 3rd position on the reversed grid while carrying a 20kg ballast for winning Race 1? Would he settle for points or attempt to win on the tight street circuit?

The question was quickly answered when he made a brilliant start to dive inside Mark Darwin in Turn 1 and began his pursuit of Shafiq. Shafiq increased his pace but was still finding difficulty shaking off Car 13 that was looming large in his mirrors.

Djan found the opportunity on Lap 3 when he found good drive out of Turn 9 to pull alongside Shafiq. Shafiq kept the inside line going into Turn 10 and when Tengku tried to turn in for the corner, they touched, sending Tengku into a half spin.

However, with background in drift, Tengku powered out of the slide and into the lead, never looking back from there to the chequered flag. The loser in the move was Shafiq who had to retire due to damage to his car.

There were more thrills further down the field when Kenny Lee was engaged in a serious battle with Akina Teo, James Verappen and Dato Mohd Nasri. Kenny finally managed to make a serious move on Lap 12 and James capitalized on the situation to also move into 9th position.

It was a fantastic weekend of racing with high-quality driving and the crowds who came out to Batu Kawan witnessed not only spectacular racing but also an amazing array of activities. The turn out on Sunday eclipsed Saturday’s numbers with a total visitor count of over 28,000 enjoying the festivities at the very first Toyota GAZOO Racing (TGR) Racing Festival.

The next event will be on November 25th and 26th in MAEPS, Serdang and this event is expected to be as explosive and exciting as the first one in Penang. 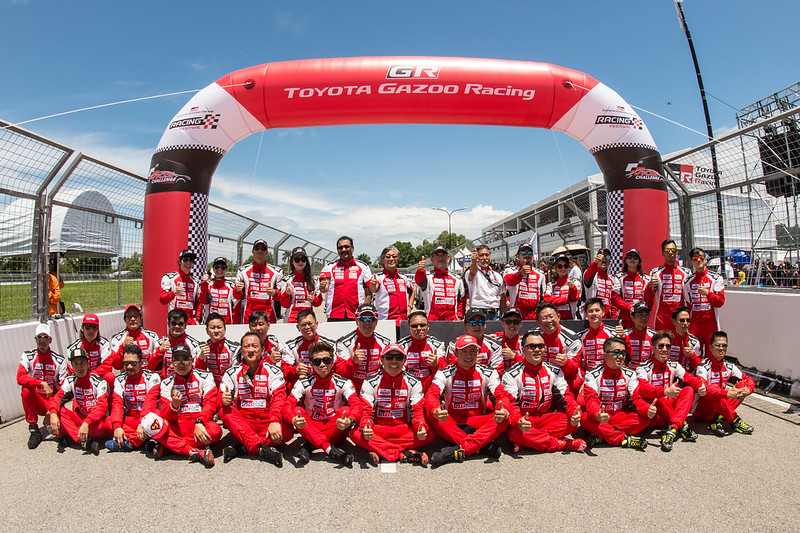 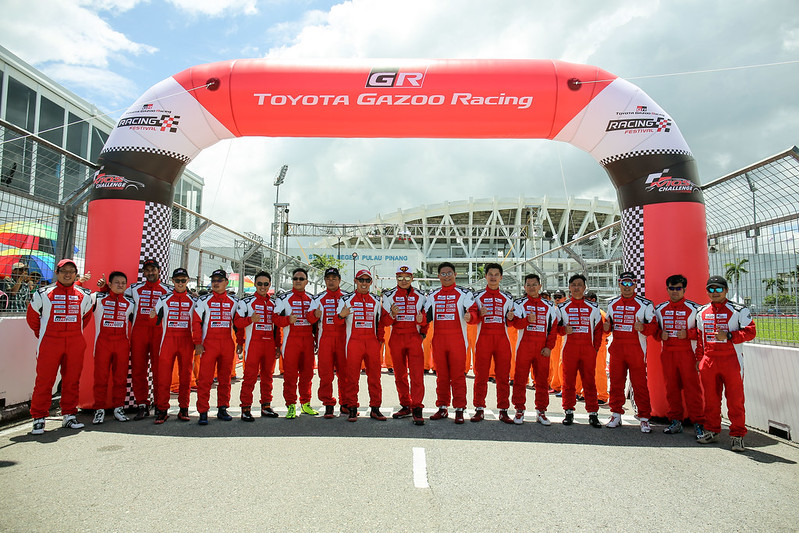 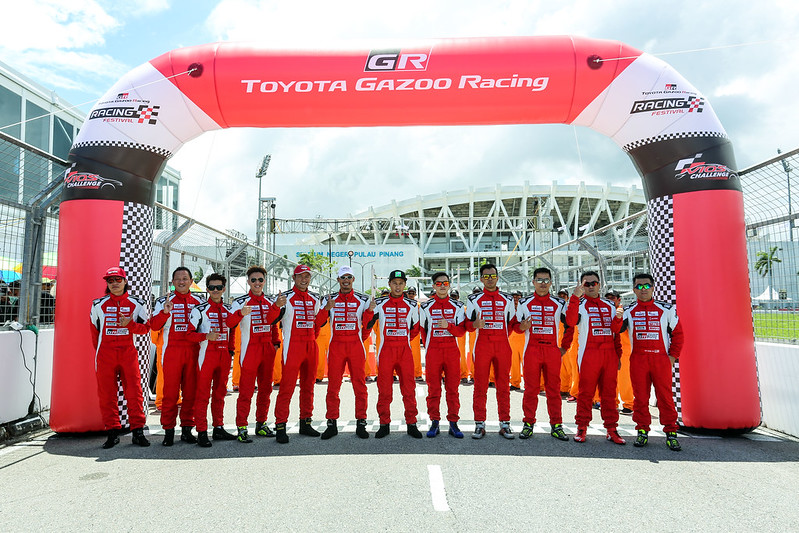 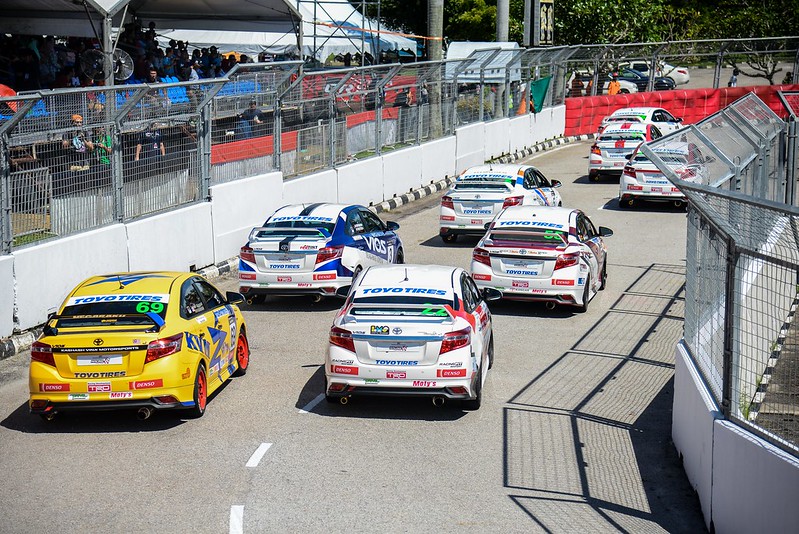 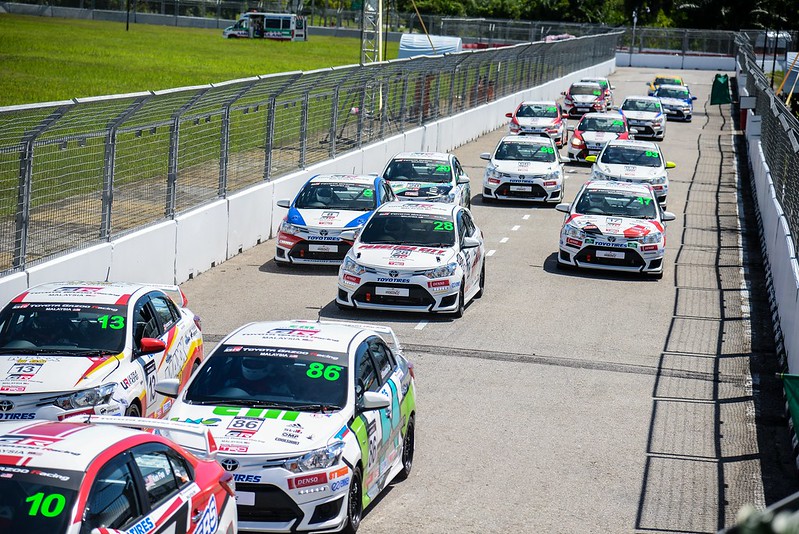 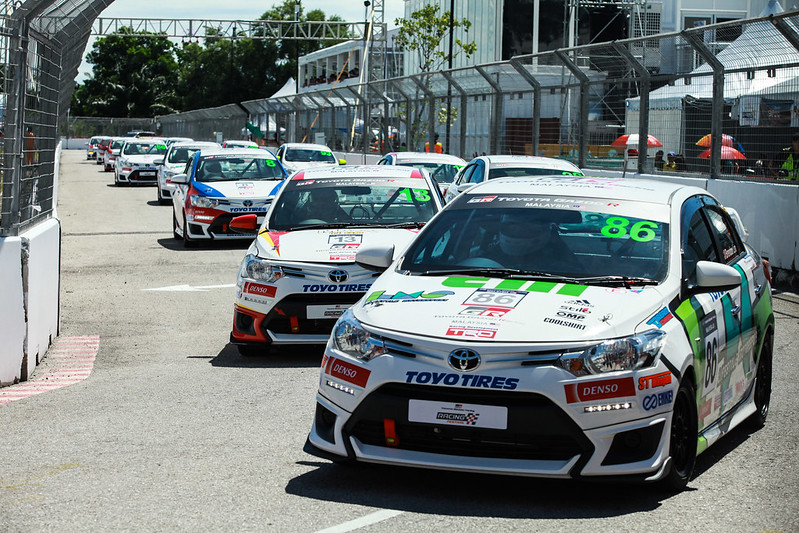 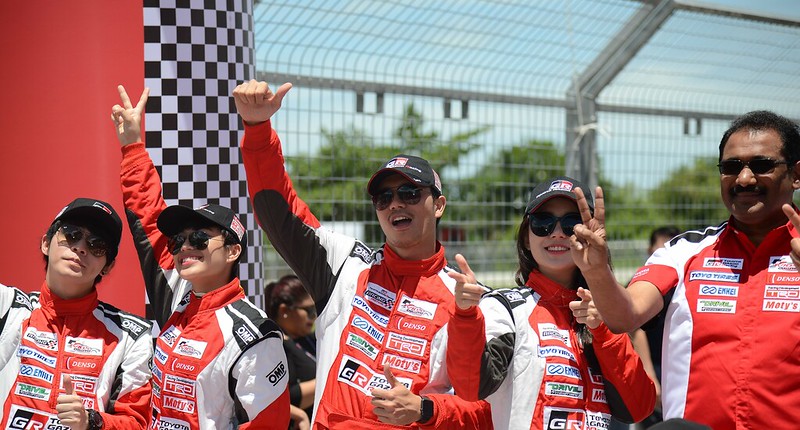 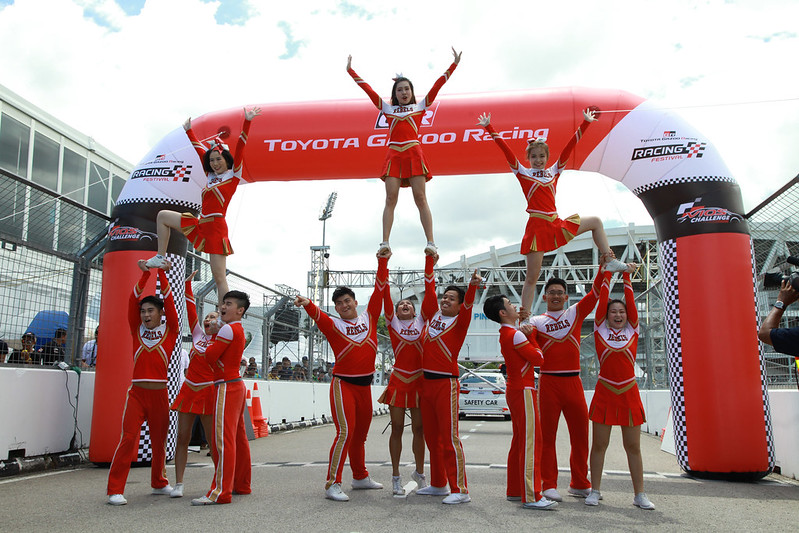 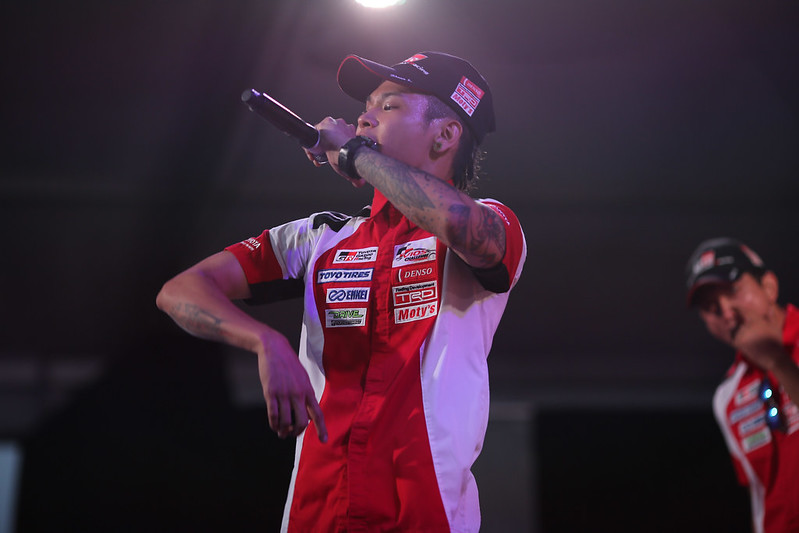 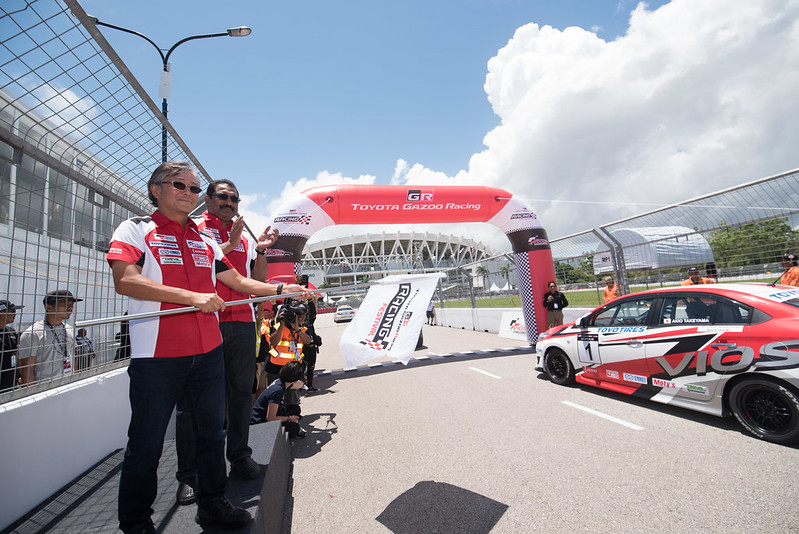 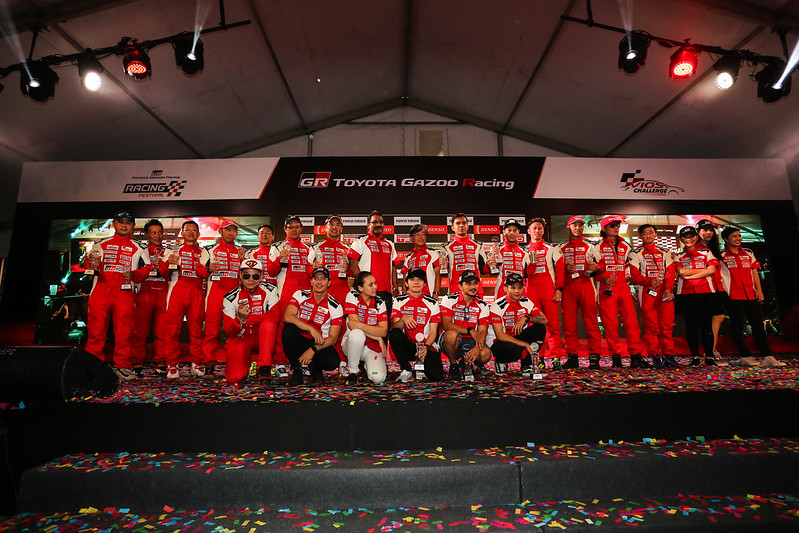