This collaboration with The Walt Disney Company (Southeast Asia) will see winners go on an all-expenses paid trip for two to Rancho Obi-Wan in California, the world’s largest privately-owned STAR WARSTM memorabilia museum

The Force has been strong in Malaysia over the past few weeks since the launch of the #MasterYourForce with Grab campaign. 59% of Grab riders in Malaysia have pledged their allegiance to The First Order, whilst only 41% chose to fight for The Resistance. 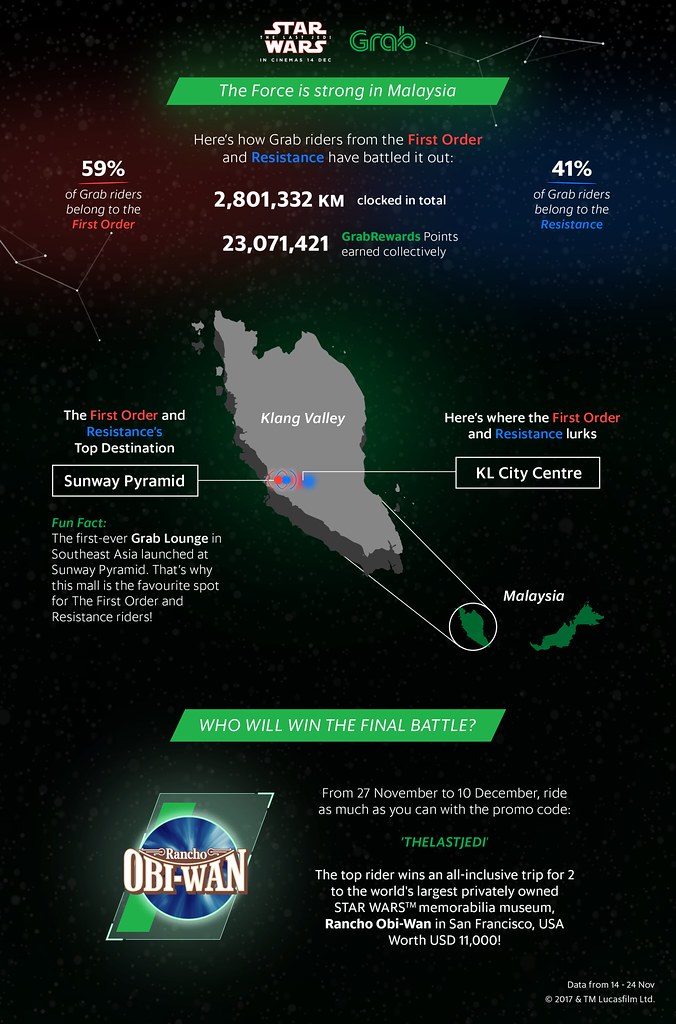 Interestingly, both the members of The First Order and The Resistance’s top destination is Sunway Pyramid, and their favourite hangout, KL City Centre. For a better idea, see how the battle panned out in this infographic.

Win a trip of a Lifetime: VIP tour of Rancho Obi-Wan and San Francisco

The battle is reaching an exciting climax whereby Grab passengers from The First Order and The Resistance complete their final race to win the trip of a lifetime to Rancho Obi-Wan in California.

Since 27 November, Grab passengers were encouraged to take as many rides as they can, using the zero-value promo code ‘THELASTJEDI’ to be in the running to win this coveted trip!

But what exactly is up for grabs?

Well, it’s not every day that one gets to book a tour of Rancho Obi-Wan, let alone a guided tour by its owner Steve Sansweet. An avid lover of all things STAR WARSTM and head of fan relations for Lucasfilm from 1996 to 2011, Steve has built friendships with hundreds of fellow STAR WARSTM fans worldwide and brought together the largest private collection of STAR WARSTM memorabilia in the world – all in one museum.

For STAR WARSTM fans, this 9,000 square-foot museum is definitely a bucket list experience! For those with just a casual interest in STAR WARSTM, simply enjoy the immersive and educational experience at Rancho Obi-Wan and the VIP tour experience Grab’s offering you in San Francisco – from Fisherman’s Wharf to Golden Gate Bridge.

Here’s what’s in it for the winner:

● Roundtrip flights for two adults to San Francisco
● Airport transfers to and from your hotel
● 5 Days 4 Nights hotel accommodation in San Francisco
● Professional tour guide will pick you up from hotel in limousine and provide transport to and from Rancho Obi-Wan
● Official tour of Rancho Obi-Wan with $200 USD spending money for STAR WARS merchandise
● Tickets to view the galaxy far, far away at Morrison Planetarium, the largest planetarium in the world
● Cable car tickets for one full day
● A VIP tour of San Francisco including a 26-inch life-sized Yoda bronze statue guarding the entrance to Lucasfilm headquarters at the Presidio
● $200 USD spending money at the Disney Store in Union Square for STAR WARS merchandise

Passengers (yes, you too!) have till Sunday, December 10 to stand a chance to win this grand prize! The top rider will be crowned the winner. So, keep booking!

Master Your Force in Pavilion KL

Don’t just watch the movie, experience it first hand at our Grab’s #MasterYourForce booth in Pavilion KL. Starting from December 14 to 17, fans of Star Wars: The Last Jedi can stand a chance to participate in a Sphero maze race and practice their pew pew pew skills!

In addition, fans who love to dress up as their favourite STAR WARSTM character can take part in a daily photo contest at our photo booth to win awesome prizes!

Mark the date in your calendar, spread the news and bring your family down for five days of exciting STAR WARSTM fun with Grab!

May the Force Be With You!