It was definitely a dream come through for many veteran talents, whose works have been recognised and honoured at the 2nd Golden Awards held last Saturday night at Putrajaya International Convention Centre, including seasoned actress, Remon Lim. The actress who has over 20 years of experience in the Malaysian Chinese TV industry was brought to tears after being crowned “Best Actress” during the prestigious night.

“It took me more than 20 years of hard work and determination to be where I am today. I am glad I stuck through the rough times and for that, I’m especially thankful to the countless support given by my family.” said Remon who was dressed in a bright red dress with glittering jewelries sponsored by Poh Kong.

Sharing the limelight with Remon is her co-star in “Forget Me Not”, Coby Chong who took home the “Best Actor” award, beating 4 other strong contenders including top runner, William San. Coby who has had more than 6 years of acting experience, finally won over many hearts with his solid performance as a mentally challenged adult in his nominated series. “During the 1st Golden Awards held in 2010, I told myself that I will stand on this stage and take home an award. I did it and I would like to thank all who have loved and supported my character and my performance in Forget Me Not,” said Coby. 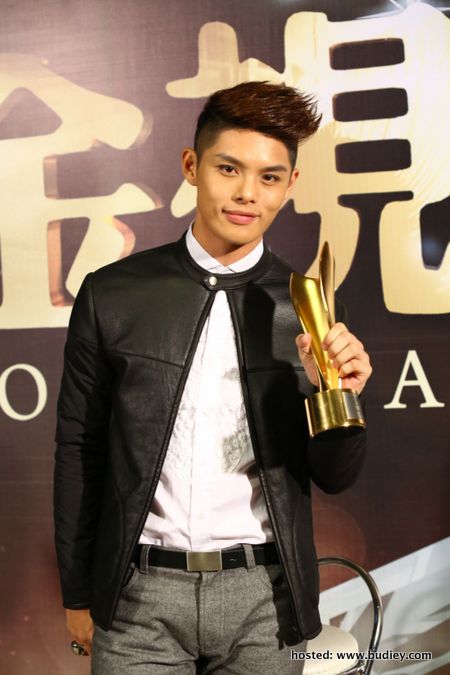 Another seasoned actor whose works have been honoured is Leslie Chai who was crowned “Most Popular Actor” after clinching the highest number of votes from the public. The boyish-looking Ipoh-born actor, who has been in the showbiz industry for more than 15 years, gave a heartwarming acceptance speech and a tribute to his late wife. “Every time when I receive an award, I will definitely acknowledge the woman who has raised me up but I would like to make an exception this time. This award goes to my beloved wife, who has given me 8 years of sweet memories together. Although she isn’t here anymore, I will still love and cherish her always,” said Leslie who was dressed in white.

Meanwhile, Alvin Wong who has been acting for more than 10 years was crowned “Best Supporting Actor” for his performance in ntv7’s sitcom, “Time FM”. “I went to the event not expecting anything at all. When I heard my name being announced, I had goosebumps. I’m really happy that my passion had paid off,” said the charming actor.

Debbie Goh who won the “Most Popular Actress” award in 2010, retained her title this year. Clad in a beautiful black dress designed by Vaughn Tan, Debbie who has had close to 10 years of acting experience thanked her family and fans for their support all these years. “The showbiz industry is not an easy road to be taken. For this, I want to thank my mother who is always there for me and I hope that she’ll always be blessed with good health,” said Debbie.

Yeo Yann Yann who won the “Best Actress” award last year, joined Debbie as a two-time winner, taking home the “Best Supporting Actress” award this time with her outstanding performance in “Time FM”. A pioneer-graduate of The Theatre Training and Research Programme in Singapore, Yann Yann has over 10 years of experience in the showbiz industry including theatre, short films, dramas, and movies.

Joining Yann Yann and Debbie as a two-time winner is TV host, Cheryl Lee who won the “Best Variety & Entertainment Programme Host” and “Best Magazine Programme Host” awards. Having been involved in the entertainment industry since 2006, Cheryl is a seasoned host whose works include 8Style, I Wanna Be A Model, Hot Chef, Truth Next Door, and Project Superstar.

Malaysia’s veteran actor, Yap Chin Fong was also honoured with the Lifetime Achievement Awards in the 2nd Golden Awards for his stellar work for the past 50 years. The actor who remains one of the most popular Chinese artiste in the country received roaring applauds and standing ovation from the audiences during his thank you speech.

Amongst the amazing line-up of performers and presenters who performed that night are homegrown singer, Michael Wong and special guests from Taiwan including heartthrob, Jiro Wang and actor, Tony Yang. Also present at the awards night are Hong Kong’s top actor and director, Gordon Lam and award-winning scriptwriter from Hong Kong, Susan Chan.

All these would have not been possible without the support of Golden Awards partners and sponsors including UMW Toyota Motor Sdn. Bhd., who came in as the Official Car and the main sponsor for the Red Carpet with Toyota Camry, Poh Kong Holdings Berhad as the Official Jewelry, Pullman Putrajaya Lakeside as the Official Hotel, and one FM for their continuous support as the Official Radio Station.

Aside from the prestigious gold-plated Golden Awards trophy, winners in all 21 categories were rewarded with RM3,000 each. Winners also received an exclusive watch each worth RM1,000 from City Chain.

Good news for those who missed the live action in PICC or on TV as the awards show is available for viewing on www.tonton.com.my. Post-event pictures will also be uploaded in ntv7’s Facebook gallery.

Golden Awards – the country’s most recognised and prestigious awards show in the Malaysian Chinese TV industry – recognises the outstanding work of those who have contributed tirelessly in front of the camera and behind-the-scenes, bringing the Malaysian industry to higher standards and recognition from its regional and worldwide peers.