Malaysians will be able to get up close and personal with Lotus Racing when the team holds a homecoming celebration at the Pavilion in Bukit Bintang next week running up to the 2010 Petronas Malaysian GP 2-4 April. 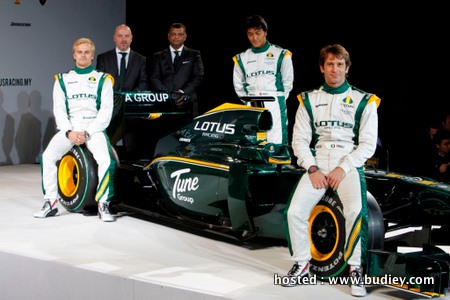 The Lotus Cosworth T127 with stunning green and yellow livery will be on display at the Pavilion’s main concourse area from 3pm to 10 pm on Tuesday 30 March 2010. This will be the first opportunity for F1 fans in Malaysia to catch a glimpse of the machine since it was launched in London on 12 February. The car had been racing in Bahrain 12-14 March and is now in Melbourne for the Australian GP.

“We will put one up on the other teams as you are going to be seeing the real car. This is the car that we will be racing in in Sepang on 2-4 April. Other teams will bring show cars but ours is going to be the real car,” Team Principal Dato’ Sri Tony Fernandes had said.

Lotus Racing merchandise will be on sale for the first time during the event. The team will also be launching the Malaysian Chapter of the official Lotus Racing Fan Club. Lotus Racing has been recognised as the top F1 team in engaging fans and followers through social media networks like Twitter and Facebook.

On the side of the celebration will be a photo gallery containing some of never-before-seen photographs that provide a chronology of the team’s history, development and progress.

The Pavilion is currently running a contest amongst its patrons whereby 10 top shoppers will receive an exclusive invitation for tea with Lotus Racing drivers.