For a reality TV show about people who work while the rest of the world is asleep, reporter Angela Vidal (Jennifer Carpenter) and her cameraman, Scott (Steve Harris), are assigned to cover a night shift with a pair of firemen at a Los Angeles fire station.

After an uneventful evening, a 911 distress call in the middle of the night takes them to a small apartment building downtown.  Police officers are already on the scene in response to bloodcurdling screams coming from an apartment on the third floor.  Having stumbled onto a breaking story, Angela and Scott are determined to get it all on tape. 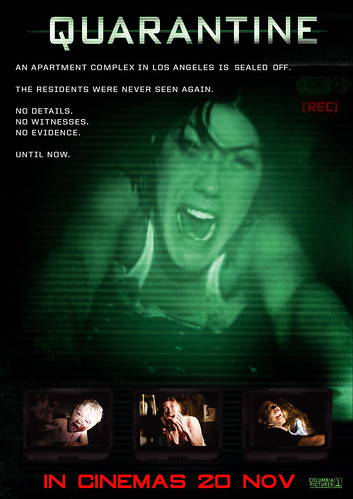 Entering the apartment unit to investigate, they find an old woman in a nightgown, standing alone in the dark.  She’s covered in blood, her breathing erratic and raspy.  She seems sick.  And when a policeman approaches to help her, she suddenly attacks…with her teeth.

The group subdues the woman and tries to get help for the injured policeman.  But when they attempt to leave the complex, they find that the CDC has quarantined the building.  All exits are sealed and guarded by heavily armed men.  Telephone, internet, TV, and cell phone access have been cut-off, and officials won’t give any explanation to those locked inside.  The apartment complex and its residents quickly descend into panic.  Trying to make sense of what’s happening, the inhabitants are forced to look to each other for help.

Then there’s another scream from above.  In the atrium lobby where everyone is gathered, a body falls to the ground from the third floor.

And the attacks begin again…

When the quarantine is finally lifted, the only evidence of what took place is the cameraman’s videotape.  Watch the tape and see the horror of what happened to those under QUARANTINE.