The hottest gossip on the sports grapevine returns to ESPN STAR Sports when MyEG Xtra Time lights up our screens with a new team of local Malaysian celebrities helming the show. The program, which has started on 21 October 2011, will be running on every Friday 8pm.

The weekly thirty-minute magazine show, in its third season, will continue to bring viewers the lowdown on sporting fads, fashion, and gossip about the world’s biggest sports stars, hosted by the very popular and glamorous presenters Diana Danielle, Hannah Tan and Sazzy Falak to offer a light-hearted look at the glamorous side of sport with a focus on the ‘off-field’ headlines, rather than results and scores from the sports world. 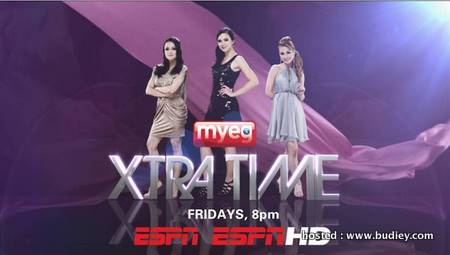 MyEG Xtra Time will be presented with plenty of style and spunk, and viewers in Malaysia would be familiar with the vivacious trio. Diana is one of Malaysia’s most promising television and film actress and singer, Penang-born Hannah is a successful singer-songwriter, actress, model and television personality, while Sazzy is a popular award-winning actress and TV host in Malaysia.

And there’s no better way to enjoy the best sports entertainment show in Malaysia than in high-definition as the programme will also be available on ESPN HD as well.

Said Diana, “Sports is often synonymous with male viewers, but with MyEG Xtra Time’s focus on sports entertainment and gossip, I’m sure we’ll have lots of female fans tuning in as well! The guys are likely to tune in as I’m sure they’ll be keen to know the latest outside the sports arena about their favourite players – and I’m certain lots of ladies will love our celebrity coverage of some of the most popular men in the world!”

Her co-host Hannah added: “If you’re looking for the latest in sports entertainment news, fashion nuggets, updates on the dating scene of sports celebrities, and off-field drama, then a weekly dose of MyEG Xtra Time is what you need. Think of the show as icing on a cake – it’s colourful, it’s light and it complements the real deal. To sports enthusiasts or viewers who love the world of gossip, there’s something for everyone on the show.”

“Sports are often associated with football and men,” said Sazzy. “With its blend of sports entertainment news and fashion, MyEG Xtra Time is the perfect platform for us to reach out to the female demographic in a lively and entertaining format.”

So make a date with Diana, Hannah and Sazzy and get a closer look inside the extravagant and glamorous lifestyles of your favourite sports celebrities and all the drama that follows them every Friday at 8.00pm, only on ESPN and ESPN HD.

About ESPN STAR Sports
ESPN STAR Sports is a 50:50 joint venture between two of the world’s leading cable and satellite broadcasters. As Asia’s biggest sports content provider, ESPN STAR Sports combines the strengths and resources of its parent companies – Walt Disney (ESPN, Inc.) and News Corporation Limited (STAR) – to deliver a diverse array of international and regional sports to fans across multiple platforms.

ESPN STAR Sports showcases an unparalleled variety of premier sports from around the globe featuring some of the most iconic sports events to a cumulative reach of over 300 million viewers in Asia through its 23 television networks and 2 broadband networks, each localized to deliver differentiated programming to meet diverse needs of Asian sports fans.