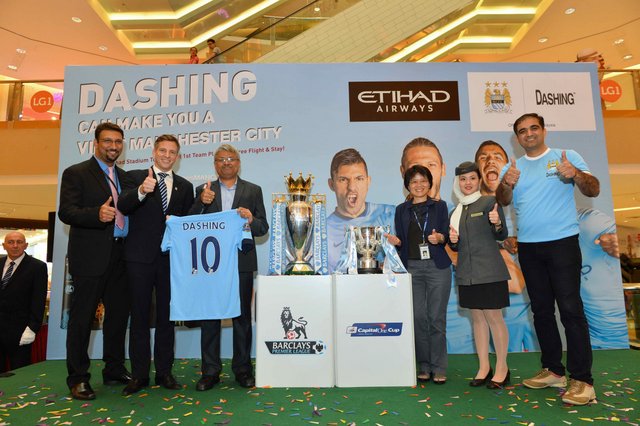 Firstly a once in a lifetime chance was provided for 20 lucky winners to go on a fully paid trip to Manchester to watch Manchester City play Manchester United, Arsenal and West Ham.

The response has been so overwhelming that 2 exclusive contests are being run by Mydin to reward all Football fans and Dashing buyers in Mydin. The contest allowed 8 lucky winners to win Official Team Jersey signed by 1st team players of Manchester City Football Club.

These Manchester City Football Club Original Nike Jersey, which Dashing is given to 8 lucky Mydin winners are not only signed by 1 or 2 players, but has been signed by all the 1st team players like Vincent Kompany, Sergio Agüero, David Silva, Samir Nasri and Yaya Toure that makes these simply priceless.

Mr Rishi Pahwa – Marketing Manager (Dashing) – Wipro Unza (M) Sdn Bhd will be presenting the jerseys to the 8 winners. He will also be present to share further details about the #DASHINGgoesMANCITY campaign.