The good-girl-gone-bad and Grammy award winner, RIHANNA, is coming to Malaysia for the first time! Her debut concert, RIHANNA LIVE IN KL 2009 is scheduled for FEBRUARY 13, 2009, FRIDAY, 8.30 p.m. at STADIUM PUTRA BUKIT JALIL.

RIHANNA LIVE IN KL 2009 is part of ‘The Good Girl Gone Bad Tour’, the second world concert tour by the Barbadian singer to support her album ‘Good Girl Gone Bad’. It consists of 3 legs with 61 shows and has run for over 6 months, starting in Canada. Supporting acts throughout the tour included Akon, Ciara, David Jordan, Chris Brown and various local European acts during the second European leg. Chris Brown and Rihanna performed 11 shows in New Zealand and Australia, and one show in the Philippines.

Rihanna also performed in Singapore on her first solo SE Asian Tour in November 2008. She is coming back for the second leg and Kuala Lumpur and Jakarta has been confirmed as the tour venues.

RIHANNA LIVE IN KL 2009 is organised by PINEAPPLE CONCERTS SDN BHD, Malaysia’s premier concert promoter; in aid of THE FORCE OF NATURE AID FOUNDATION. PREMIUM & CORPORATE SEATS are available and proceeds of the charity sale will be donated to the organisation. 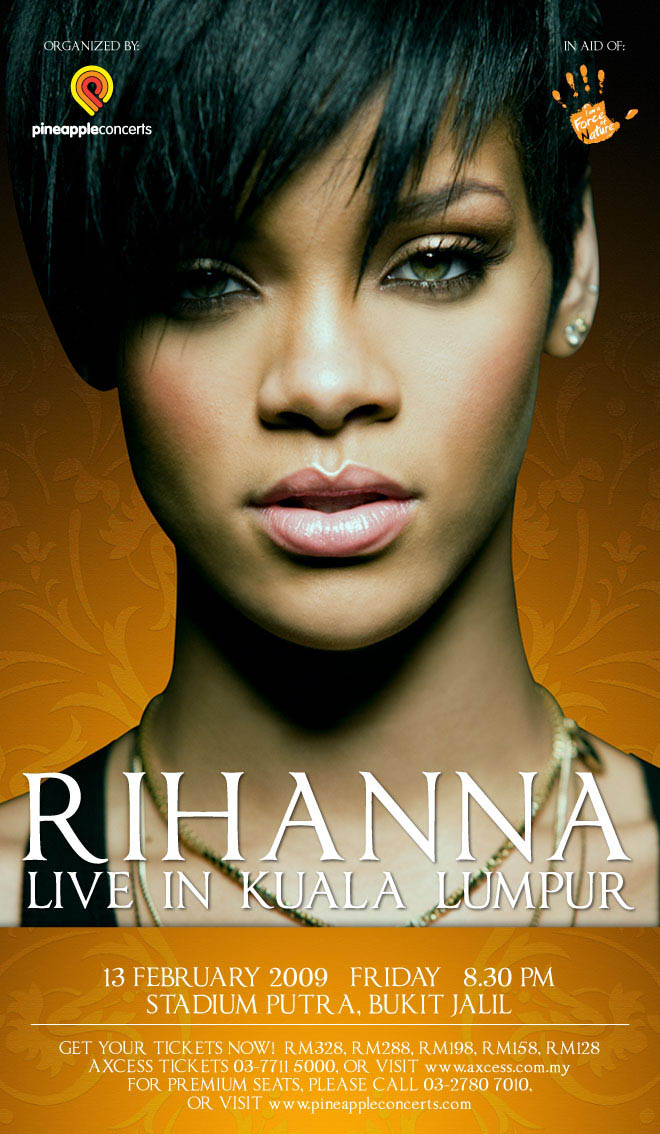