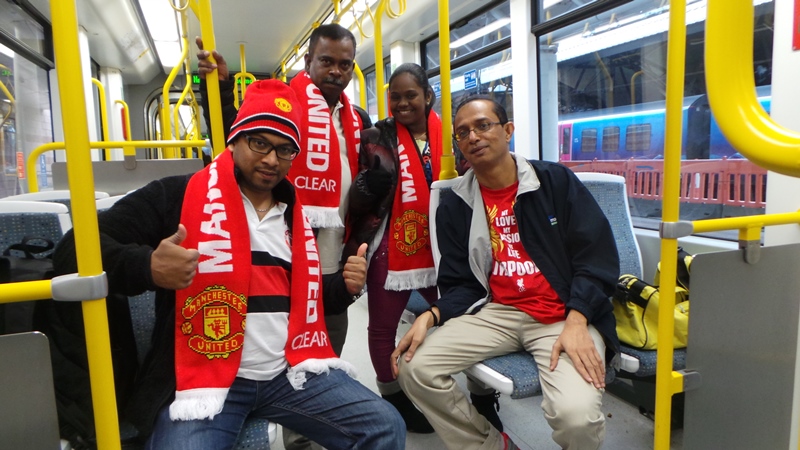 The two grand prize winners, Arunmoli Palayathan and Ciwan Palaniappan, won a 5-day, 4- night trip to Manchester from Thursday, 11 December to Monday, 15 December 2014, with a companion of their choice. Arun brought with him a close friend and fellow football enthusiast, while Ciwan chose his 14-year-old daughter as his companion. The winners, who have been Manchester United fans for more than 20 years, were looking forward to a victory on Manchester United’s side.

“CLEAR is a product for confident men, designed to help them stay ahead of the game. Our hair care helps to keep men feeling fresh and confident, but we realised it’s also important to support their lifestyle needs with initiatives that excite and relate to them. Recognising that football is a passion point for most Malaysian men, CLEAR constantly strives to come up with activities that help fuel this passion,” said Anastasya Hong, Brand Manager for CLEAR, Unilever (Malaysia) Holdings Sdn. Bhd.

The highly anticipated Manchester United versus Liverpool match took place on Sunday, 14 December. Before the game, the winners were given a true VIP experience at Old Trafford, beginning with a surprise pitch side photo opportunity with former Manchester United player and the longest serving captain in the club’s history, Bryan Robson. In addition, the awestruck winners were also given the chance to exchange a few words with Robson.

Following that, the winners were escorted to the Treble Suite for pre-match refreshments. As they excitedly discussed their encounter with Robson, the winners were lucky enough to also meet Manchester United legends Mickey Thomas, Lou Macari and Arthur Albiston, who were spending time with fans in the hospitality suite. “This is truly a VVIP treat – an unforgettable experience – what a way to watch the live match. Thank you CLEAR for making this happen,” enthused Arunmoli.

Spirits were high and energy was sizzling in the air as the teams kicked off and Manchester United scored a goal early in the game. Goals from Wayne Rooney, Juan Mata and Robin Van Persie gave United a 3-0 win against rivals Liverpool, much to the delight of the CLEAR and Manchester United trip winners. “This trip was one of the best I’ve been on, and the win from United made it that much sweeter. I didn’t expect to be able to meet so many Manchester United legends. It was a great surprise from CLEAR,” said Ciwan.

Prior to match day, the winners went on an Old Trafford stadium tour as part of the trip to Manchester. During the stadium tour, the winners were surprised with customised Manchester United jerseys with their names on it as a gift from CLEAR. The winners also took the museum tour and enjoyed a meal at the Red Café.