Music new singer songwriting sensation CHRISTINA PERRI who took the music industry by storm with her single “Jars Of Hearts” and now with the anthemic theme from the Twilight saga movie Breaking Dawn. “A Thousand Years” will be performing Live in Malaysia on Thursday, 7th June at KL LIVE at 8.30 pm.

Christina Perri has come a long way as in July 2010, the then struggling singer-songwriter and musician had a life-changing moment when she was asked to perform a song she had written, a defiant break-up anthem called “Jar of Hearts,” on the Fox show So You Think You Can Dance. The raw, emotional quality of her performance connected with viewers and catapulted the 24-year-old Philadelphia native into the public eye. “Jar of Hearts” went on to sell a million downloads and land Perri, who was then supporting herself as a café manager in Beverly Hills, a deal with Atlantic Records. 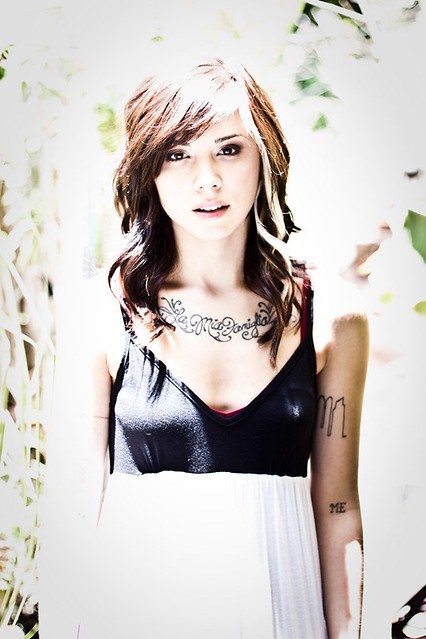 Jar of Hearts” is just one of 12 honest gems that Perri unveils on her debut album lovestrong., a title she says reflects how her heart feels today. “I looked at the album as a whole piece and the two themes that stood out were love and strength,” she says. “It really titled itself. Writing about love is just who I am. I’ve tried to write about other things, but ultimately this is what comes out of me.”

Perri lays herself bare on lovestrong., using her soaring, bittersweet voice and expressive piano playing to sketch out her stories. Some, like “Penguin” and “Arms,” are happy and hopeful, some, like “Bang Bang Bang” and “Mine,” are fun and playful, and others, like “The Lonely” and “Jar of Hearts,” are downright wrenching. The common thread? “They’re all songs I felt I needed to give away,” she says. “I have been writing songs since I was 15, so I reached into my arsenal and picked the ones I felt others should hear. My intention for my music is pretty simple: I want to make people feel less broken and alone.”

Perri sets lovestrong.’s hopeful tone with the second single “Arms,” a towering acoustic-guitar driven tune that builds to an urgent crescendo as its tale of the fight between the heart and the mind unfolds. “Your heart wants to be loved, but your head is telling you that you shouldn’t be with that person,” Perri says. “The song is about that struggle and finally giving in and letting love win.”

It didn’t really register how emotionally raw the album was going to be until Perri’s 20th day in the recording studio. “In the vocal booth, I had to go back to the place and time that made me feel so vulnerable and rip open old wounds to sing each song, sometimes two songs in a day,” she says. “Emotionally, it was the hardest 33 days of my life, but it was worth it because the result is that this album is 100 percent me. It’s heartfelt, real, bold, honest, vulnerable, hopeful, strong, poetic, bluesy, gritty, pretty, and simple.”

Produced by Joe Chiccareli (White Stripes, Tori Amos) and mixed by Michael Brauer (Coldplay, Regina Spektor), lovestrong. boasts a bold creative vision that is very much in keeping with Perri’s spirited personality. A petite, tattooed ball of energy with an engaging smile, she has always embraced life to the fullest. Her adventures have included touring the world as an assistant to a rock band, spending a year at a prestigious university, producing popular music videos, making olive oil in Italy, and even serving as a fashionista barrista in Beverly Hills

On June 30th, 2010, Perri got word that “Jar of Hearts” was going to air on So You Think You Can Dance as a backdrop to a memorable piece choreographed by Stacey Tookey. Viewers began downloading the song from iTunes in droves, sending “Jar of Hearts” into the Top 10 on the iTunes Pop chart and into the Top 15 on the Overall chart overnight. Impressed, SYTYCD’s producers invited Perri to play the song live on the show two weeks later. After Perri performed the song on July 15th, “Jar of Hearts” landed at No. 25 on the Billboard Hot 100 chart, at No. 1 on Amazon’s digital singles chart, and sold 200,000 downloads in three weeks. “While all of this was happening, I barely slept,” Perri says, “because I was afraid it was just a dream; that I’d wake up and none of it would be real. One minute I didn’t exist in the music world and the next minute I did.”

Perri had actually been preparing for her big moment since she was a child. The daughter of hairdressers (whom she describes as “not musical, though my mom can whistle in many octaves”), Perri first sang in public at her Holy Communion at age six. Piano lessons began at age 8, but her piano teacher “fired” her (as she puts it), because “I would change the endings to the songs when I didn’t like the way they were written.” Eventually, Perri picked up a guitar and taught herself to play. She was in London working as a gofer for her brother’s band Silvertide when she got word that she had been accepted to Philadelphia’s prestigious University of the Arts with a sizeable scholarship. She attended for a year, but took a leave of absence to visit her father’s extensive family in Italy. “I was 19 and I needed to soul search,” she says. “I was still writing music, but I didn’t know what I wanted to do with my life.”

Still searching, Perri moved to Los Angeles with a suitcase and a guitar and recommitted herself to being a singer and a songwriter. She posted YouTube videos of herself performing her own songs, as well as covers, and shared her struggles in her uniquely humorous way. A video of one of her original compositions, “Tragedy” (which is included on lovestrong.), caught the attention of Bill Silva Management, who signed on to represent her. And so began Perri’s charmed odyssey. She will hit the road for spring tour with James Blunt as she awaits the May 10th release of lovestrong.

“Every day something happens that blows my mind,” she says. “Being able to wake up and play music is more than I’ve ever dreamed my life could be. I’m looking forward to sharing my experiences, my hope, my strength, my guts, and my heart with the world.” …….

Her latest current hit “A Thousand Years” taken from the album The Twilight Saga: Breaking Dawn — Part 1: Original Motion Picture Soundtrack. was featured in a Vimeo clip of popular Malaysian blogger Timothy Tiah Ewe Tiam, co-founder of the popular ad-blogging site Nuffnang, proposing to his girlfriend/fiancée Audrey Ooi Feng Ling, with “A Thousand Years” used as the backing track for the proposal video, immediately went viral on the web, racking up nearly 4 million views online within a week, with American Idol host Ryan Seacrest hailing it as a heartwarming coda to 2011. Perri confessed that the video made her cry.

CHRISTINA PERRI Live in Malaysia is jointly organized and promoted by JS Concert Productions and Fatboys.