Synopsis:
The series follows legendary archeologist Dr. Zahi Hawass as he pursues one of the most challenging and exciting jobs in the world: discovering new archeological finds while managing 250 digs throughout Egypt. The cameras will be right there as he and his team unearth new treasures, ranging from incredibly preserved mummies to, perhaps, Cleopatra’s tomb. This unique series shows archeology as never seen before: unfiltered and transparent, revealing and amusing, exasperating and dangerous. Viewers will see not only the whirlwind, international life led by Dr. Hawass but also the hardships and very real risks facing the teams and camera crews as they work in Egypt’s scorching deserts and valleys. 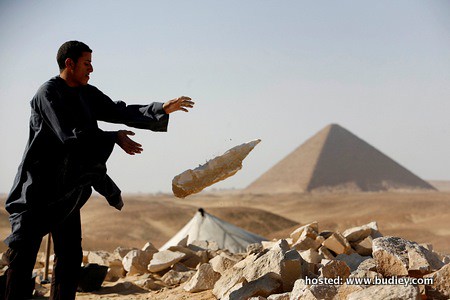 Stuck, 3 Nov
Zahi is supervising the restoration of the Step Pyramid, the oldest pyramid in Egypt. It’s there that we meet the new members of his fellowship program: Late to show up, Lindsay nearly loses her job before it actually begins! Meanwhile, Fellowship Coordinator Dr. Allan Morton realizes the erroneous assignment of Zoe to the program. Allan gets an earful from Zahi for his mistake before Zoe begs him for the chance to go inside the Step Pyramid for some photos…after all, she’s traveled so far! Zoe goes deep inside the bowels of the pyramid with a cameraman, then gets stuck and locked inside. Zahi races back to Saqqara to open up the pyramid and save them both.

Trapped, 10 Nov
Only a handful of people have ever had the chance to see the Five Chambers high above the Grand Gallery of the Great Pyramid. Now, Zahi decides to go on his final journey to the Five Chambers with the fellows in tow…together they will document the ancient graffiti on the walls of the Chambers, proving Zahi’s theory that ancient Egyptians, not slaves, built the Pyramids at Giza. This near-death experience leaves the fellows; Leslie, the executive producer; and, the crew gasping for air. Finally, Zahi will reveal his findings in an exclusive television interview.

Lost, 17 Nov
Most people experience something rare or exceptional once or twice in a lifetime, but Zahi Hawass, unimpeded by his tireless lust for adventure, lives many lifetimes in a single day; Zahi moves from a dig site in Saqqara…descending deep underground to uncover a cache of mummies; to the Workmen’s Cemetery; and finally, discovers a rare and important piece of Egyptian history…a beautiful anthropoid sarcophagus from the 26th Dynasty! After a day like that, anyone would be ready to end their day…not Zahi…he’s going to party at one of Cairo’s latest hotspots!

Discovered, 24 Nov
On the road to Dakhla, the fellows learn quickly just how fast everything can change when Zahi is in the driver’s seat! Army maneuvers have shut down their journey to restore an ancient minaret and now they must take a treacherous journey through the White Desert to camp overnight in a deserted oasis. If only the fellows had prepared for this! With their food spoiled from 115° temperatures, only Zahi can show them how to make friends with the local Bedouins, who feed the starving group. The next day, Zahi must fly out to meet former First Lady Laura Bush in Dallas and speak about his recent discovery of Queen Sesheshet’s Pyramid. 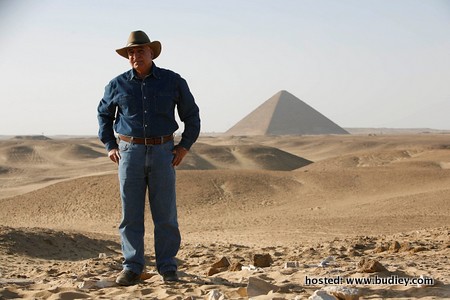 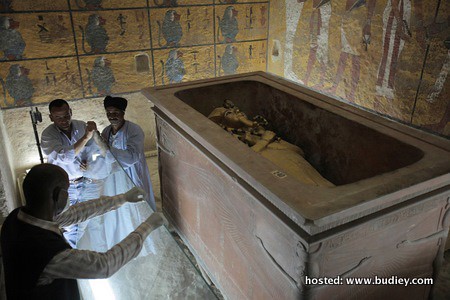