Scholarship provide future leaders, decision makers and opinion leaders of Malaysia an opportunity to enhance their knowledge, skill and potential with some of the world’s best Universities and Colleges in the United Kingdom. 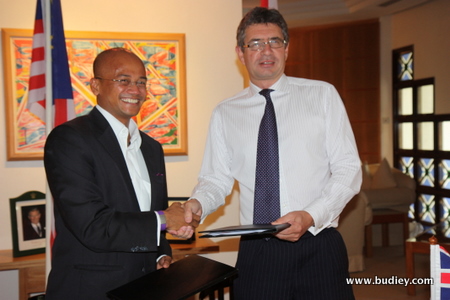 The Chevening Scholarship is the most prestigious award available to international students for study in the United Kingdom. The scholarship is named after Chevening House in Kent, the official country residence of the Foreign Secretary. The programme commenced in 1984 and is funded by the British government’s Foreign and Commonwealth Office.

Under the terms of the partnership, AirAsia X will provide return flights and baggage allowance for ten scholars for travel from Kuala Lumpur LCCT to London, for the academic year 2011/2012. All tuition fees and living expenses will be funded by the British Government’s Foreign and Commonwealth Office.

Speaking at the signing, Chief Executive Officer, AirAsia X, Azran Osman-Rani said “The association with the Chevening Scholarship Programme is part of AirAsia’s effort to provide opportunities for bright talented Malaysians to realise their fullest potential in a way that AirAsia Group has in helping to realise dreams and ambitions of its employees over the last 10 years of it taking to the skies”

The partnership with one of the most highly coveted scholarship programmes also echoes AirAsia Group CEO, Tan Sri Dr. Tony Fernandes CBE’s commitment and mission to further facilitate the promotion of education and cultural ties between the United Kingdom and Malaysia.

Strengthening educational links between the UK and Malaysia was cited as one of the achievements of Tan Sri Tony Fernandes when he was awarded the CBE by the Queen earlier this year.

He adds, “We are proud to be associated with such a prestigious award and are honoured to welcome these bright, talented future leaders of the country onboard their first and last legs of the journey to and from London.”

“More than 1200 Malaysian scholars have studied in the UK since the programme started in 1984. Most now hold positions of responsibility in public administration and government, international organisations, journalism, commerce, science and education. We hope to continue in the tradition of providing bright, young talented Malaysians an opportunity to learn, compete and excel in their area of study in some of the world’s best universities and colleges in the United Kingdom. We look forward to them returning home upon the completion of the program to contribute in the development and growth of Malaysia” concluded Azran.

Meanwhile, Ray Kyles, Acting British High Commissioner to Malaysia said, “I would like to thank AirAsia-X for their generosity and their great support in promoting education. It is highly appreciated. With their involvement, we are able to increase the number of scholarships awarded at a time when both Governments are seeking to strengthen the bilateral relationship across the board. We genuinely hope that this collaboration will mark the start of a number of joint ventures with AirAsia X in Malaysia.”