AirAsia X, the long haul, low fare affiliate of Malaysian based AirAsia Group has signed a firm contract for 3 new A330-200s with an option for 2 more, which brings the airline’s total order to 28 A330’s. Scheduled for delivery from 2014, the aircraft will be operated on the carrier’s expanding network, offering low fare service to destinations in Europe, Asia and the Pacific. 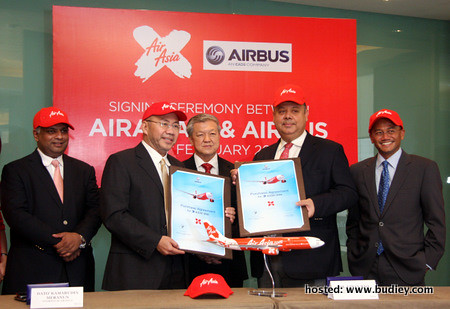 AirAsia X has ordered the 238 tonne increased take-off weight version of the A330-200, which is capable of flying non-stop from Kuala Lumpur to Europe. The airline will configure the aircraft in a two class layout with 24 Premium flatbeds and 264 Economy seats.

The agreement was signed by Dato’ Kamarudin Meranun, the Chairman of AirAsia X and Dr. Kiran Rao, Airbus Executive Vice President, Sales and Marketing. It was witnessed by The Honourable Datuk Seri Dr, Chua Soi Lek, Dato’ Sri Dr. Tony Fernandes, Founder of AirAsia X and Azran Osman-Rani, CEO of AirAsia X. The signing ceremony took place today at the Westin Kuala Lumpur with the attendance of AirAsia X’s business partners and members of the media.

Azran Osman-Rani, Chief Executive Officer of AirAsia X said “This order reflects our positive outlook for the long haul low cost market out of Asia and the investment valued at RM1.5 billion would contribute significantly to the Prime Minister’s Economic Transformation Programme (ETP) targets, specifically in realising the Prime Minister’s strategy of prioritising direct flights to strategic and important markets. This would ensure Malaysia achieves its tourism targets in 2020.”

“With its low fuel burn, spacious cabin and extended range, the A330-200 will further improve our fuel efficiency and carbon emissions and strengthen our position as having the world’s lowest unit cost, enabling more people to fly further at lower cost than ever before,” concluded Azran.

“This latest order from AirAsia X underscores the position of the A330 as the most efficient aircraft in its class flying today,” said John Leahy, Chief Operating Officer Customers, Airbus. “The A330’s low operating costs, range capability and proven reliability make it the clear winner for airlines flying in the growing long haul budget market.”

AirAsia is the largest low cost airline group in the Asia-Pacific region and operates an all-Airbus fleet. Altogether, the group has now ordered over 200 aircraft from Airbus, including 175 single aisle A320s, 28 A330s and 10 A350 XWBs.

The twin engine A330 is one of the most widely used wide body aircraft in service today. To date, Airbus has won more than 1,100 orders for the various versions of the aircraft and over 700 are currently flying with almost 90 operators worldwide.