BACK BIGGER BETTER & BOLDER: AirAsia teams up with Hasbro to launch Limited Edition TRANSFORMERS: DARK OF THE MOON Merchandise

SUNWAY, 29th June 2011 – AirAsia proudly unveils limited edition collectible TRANSFORMERS: DARK OF THE MOON merchandise that is exclusively available only on AirAsiaMegastore.com, on board AirAsia and AirAsia X flights and the AirAsia Merchandise kiosk at LCC Terminal.

As this summer’s most anticipated film with opening projections expected to break records, it was only natural and true to AirAsia’s tradition to stay on trend. This is the second collaborative effort and joint partnership between AirAsia, Hasbro and Paramount to produce the co-branded merchandise. After successfully initiating the partnership back in 2009 for the second instalment of the movie, the comeback needed to be nothing less than a bang – bigger, better and bolder than before. 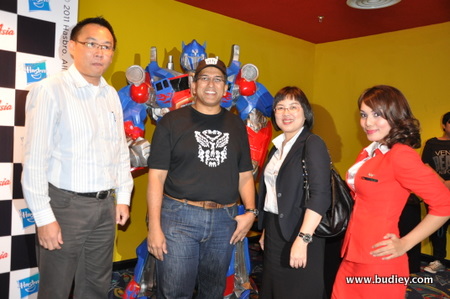 Regional Head for Financial Services and Loyalty in AirAsia, Johan Aris Ibrahim said that the partnership was paramount for the company, as it only wanted to associate with brands that would offer the best to its passengers.

“The partnership is meaningful to the AirAsia brand. The association with one of the biggest blockbuster movies of this year was primarily to engage with our passengers and provide exclusive merchandise of the highest quality at affordable prices”.

With a range of merchandise that will appeal to both kids and adults that include, T-shirts, Blackberry and iPhone covers, caps and lunch boxes there’s something for everyone.

Shoppers who purchase the merchandise online at www.AirAsiaMegastore.com will enjoy a 10% discount off retail price for all items.

Also, in support of the launch, on-ground activities and attractions will be held at LCC Terminal from 4th July onwards. This will feature a full-fledged TRANSFORMERS kiosk, life-sized models of the characters from the film and a photo booth for guests who frequent the airport. In conjunction with Malaysia Airports Berhad, shoppers will enjoy a 10% discount on TRANSFORMERS merchandise when they spend a minimum of RM150 at any retail outlet at the airport and RM2 off for a photo taking session at the TRANSFORMERS kiosk.

TRANSFORMERS: DARK OF THE MOON is currently showing in cinemas nationwide in 3D.

About AirAsia and AirAsia X

AirAsia, the leading and largest low-cost carrier in Asia, services the most extensive network with approximately 139 routes covering destinations in Asia, Australia and Europe. Within 10 years of operations, AirAsia has carried over 100 million guests and grown its fleet from just two aircraft to approximately 104. The airline today is proud to be a truly Asean (Association of Southeast Asian Nations) airline with established operations based in Malaysia, Indonesia and Thailand, servicing a network stretching across all Asean countries, China, India, Bangladesh, Sri Lanka and Australia. This is further complemented by AirAsia X, its low-cost long-haul affiliate carrier that currently flies to destinations in China, Australia, Taiwan¸ Iran, Korea, UK, Japan, France and New Zealand. AirAsia is the regional carrier with the largest destination network and highest flight frequencies. AirAsia was named the World’s Best Low Cost Airline in the annual World Airline Survey by Skytrax for three consecutive years (2009, 2010, 2011)

AirAsiaMegastore.com is an online portal positioned for passengers to get their hands on AirAsia merchandise as well as travel and lifestyle products. Look out for exclusive monthly Star Products, fantabulous deals, new releases and hot recommendations. On top of that, AirAsia Megastore also offers free shipping on selected merchandise, free Megastore Assure on every purchase for peace of mind shopping, secure and convenient payment methods and hassle-free doorstep delivery.