Buy one movie ticket to redeem free movie passes or regular popcorns! TGV Cinemas, one of Malaysia’s leading exhibitor and multiplex cinema operators, is celebrating the opening of TGV Cinemas Jaya Shopping Centre with their 30 Days of Goodies signature campaign.

Aptly named TGV Cinemas’ 30 Days of Goodies, TGV Cinemas is giving out movie tickets or regular popcorn sets to the first 100 patrons in TGV Cinemas Jaya Shopping Centre from 5th March 2015 to 5th April 2015. To redeem the freebie of the day, patrons will need to buy one movie ticket, take a photo of themselves together with TGV Cinemas’ signage and upload the photo to either Facebook, Twitter or Instagram with the hashtag #tgvcinemas or #JayaShoppingCentre.

Celeste Koay, Senior Marketing Manager of TGV Cinemas shared that this is part of the cinema chain’s efforts to celebrate and enhance awareness about the opening of their new location. “In addition, the campaign is also our way of thanking and rewarding our patrons for their support at the recent opening,” added Koay.

TGV Cinemas Jaya Shopping Centre boasts eight cinema halls with 993 seats. All halls are fitted with the state of the art Dolby Digital sound system and Christie® CP2220 a digital cinema projector system. In addition, the first row of each hall is also fitted with its iconic Beanie seats (bean-bag) to make the viewing experience in the front row more comfortable and relaxing.

Besides the 30 Days of Goodies campaign, patrons of TGV Cinemas Jaya Shopping Centre are able to purchase tickets in advance for Marvel’s Avengers: Age of Ultron and enjoy the latest popcorn flavours such as Sour Cream & Onion and Peanuts Royale. The cinema also has the Value Deals promotion exclusively for students and senior citizens, which allows them to watch their favourite movies with discounted price. 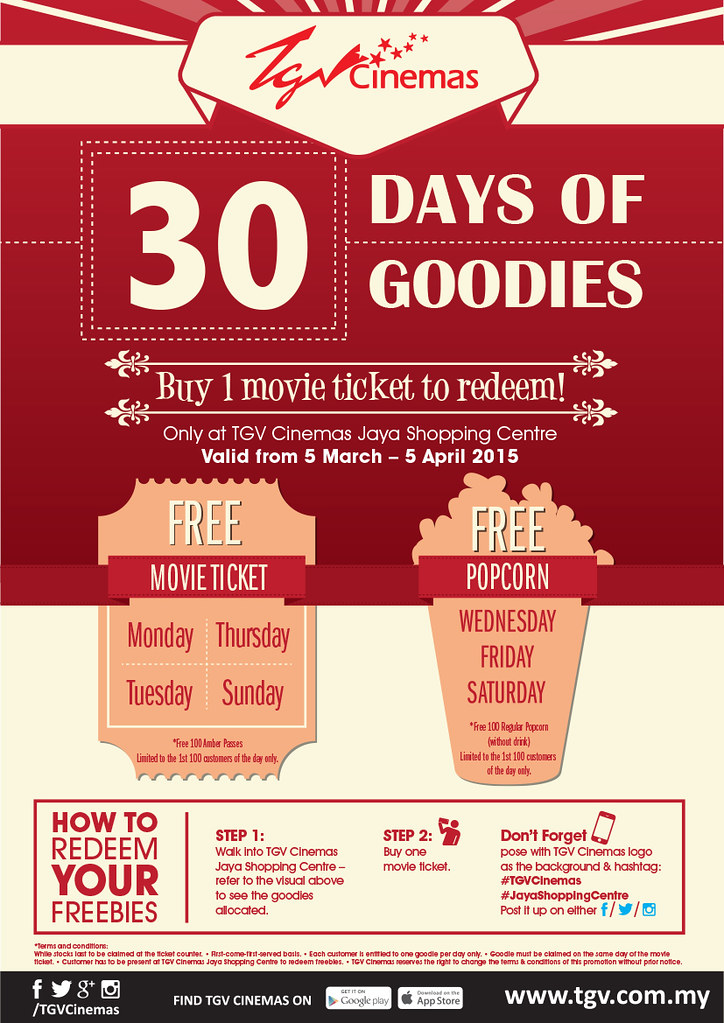