Aptly named TGV Cinemas’ 30 Days of Goodies, the first 100 patrons to purchase a movie ticket from any of the four newly opened cinemas will receive free movie passes on Monday, Tuesday, Thursday and Sunday and regular popcorns on Wednesday, Friday and Saturday from 11 January to 6 February 2015.

Celeste Koay, Senior Marketing Manager of TGV Cinemas shared that the campaign is a gesture to thank patrons for visiting and supporting the new cinemas in their respective towns. “We are excited to open the new cinemas in Miri, Bukit Mertajam, Seri Manjung and Perak to bring a whole new level of cinema experience to our patrons,” added Koay.

Collectively, the four new cinemas has 27 screens with 3,435 seats. TGV Cinemas Bukit Mertajam and TGV Cinemas AEON Seri Manjung both have seven halls, TGV Cinemas Permaisuri Imperial City Mall have eight halls and TGV cinemas AEON Kulaijaya has five. All halls are fitted with the state of the art Dolby Digital sound system and Christie® CP2220 digital cinema projector system. In addition, the first row of each hall in TGV Cinemas Permaisuri Imperial City Mall has been fitted with its iconic Beanie seats (bean-bag) to make the viewing experience in the front row more comfortable and relaxing.

For more details about TGV Cinemas’ 30 Days of Goodies, patrons can go to www.tgv.com.my or log on to the Facebook page at fb.com/tgvcinemas. 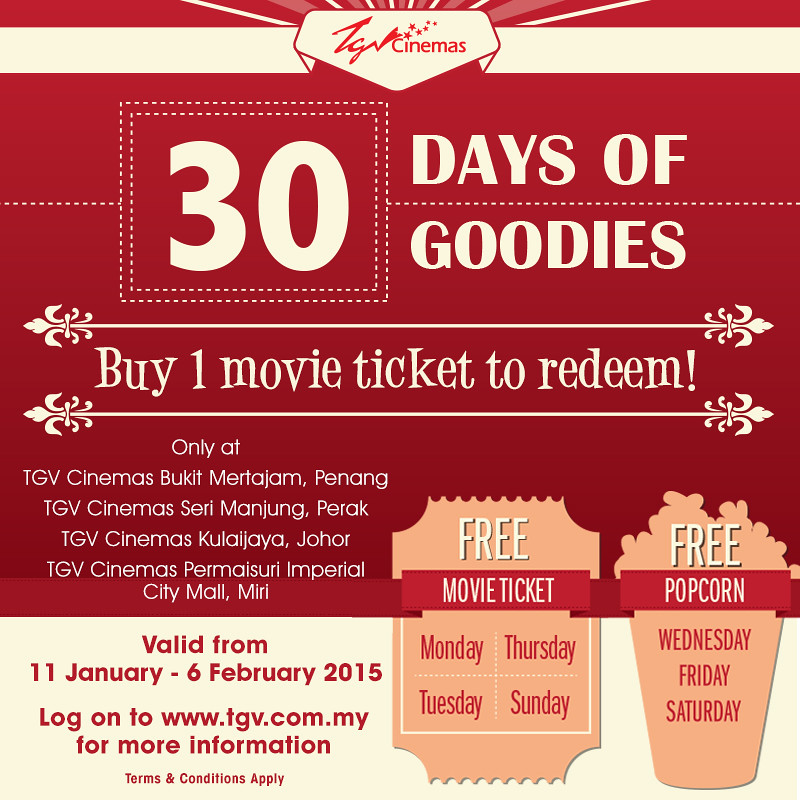